We won! Here are the ten things we love most about the St. Louis Blues being the Stanley Cup champions.

1. We Got Proof That Ozzy Osbourne Is on Our Side
We're not saying that it was Ozzy Osbourne who pushed the Blues to win in Game 7, but we're not not saying that, either. All of St. Louis fell in love with a 1984 mugshot of Osbourne's in which he was wearing a Blues t-shirt. Then, last night, he made it clear he reciprocates, posting a recent photo of himself in a Blues Stanley Cup Finals jersey right as the puck dropped.

We love you, Prince of Darkness.


2. The Blues Licked Brad Marchand
Bruins player Brad Marchand is an agitator, which means he's a pesky shit whom everyone hates except for Bruins' fans. How pesky? Last year he licked various other players during games, trying to get goad them into hitting him and drawing a cheap penalty. The NHL stepped in and officially told him to keep his tongue in his mouth. Last night the Blues licked him, tore out his tongue and heart and skated on to victory, leaving Marchand weeping the most delicious tears. "They took our dream from us," he moaned after the game, while 99 percent of hockey fans laughed heartily. Oh, Bradley — sic transit Gloria. (It's Latin for "Fucking play 'Gloria,' DJ.")

3. The Blues Got to Drop So Many F-Bombs on Live Television
Deadspin has a great compilation video of all of the times the Blues said "fuck" on live TV last night. (Spoiler alert: It was a lot.)

4. "And a Rookie Shall Lead Us Into the Promised Land"
The Blues have had some great goalies (Mike Liut, Curtis Joseph, Grant Fuhr), but none of them ever took us all the way. And then Jordan "Do I Look Nervous?" Binnington comes out of nowhere as a rookie at the bottom of the goalie depth chart and does the damn thing. He has everything a franchise goalie needs, and we didn't even know we had him back in October. Binnington's young, he's quick, he has the crucial ability to forget a bad game and go into the next one mentally prepared and he does a fucking brilliant impersonation of a brick wall.

5. Old Man Bouwmeester Has a Cup
Defenseman Jay Bouwmeester has absorbed a lot of abuse from Blues fans over the years. He's 35, he's slow, for a defenseman he gives away far too many pucks — there's a long list of reasons for why fans have wanted him to be traded away. But through 26 games of the playoffs, Bouwmeester was solid. He led all defensemen in plus-minus, and the only blueliner who averaged more minutes for the team in the playoffs is Alex Pietrangelo. He was a draft horse when the Blues needed him, and doesn't St. Louis love a draft horse? A Stanley Cup to cap off his long career is a pretty sweet trade for all that abuse, which speaking only for ourselves here, came from a place of concern and love.

6. The Blues Fought Each Other, and then Fought All Comers — as a Team
Back in early December the Blues were playing like dogshit, and everyone could smell it. Robert Bortuzzo and Zach Sanford fought each other on the ice during a team practice, which seemed like a perfect metaphor for how they played: as individuals struggling against one another. New interim coach Craig Berube came in with a legacy of toughness — the Man from Calahoo is seventh on the all-time penalty minutes list, and he earned every one — and drilled toughness into the team. If you play like dogshit, you lose your place on the ice. If you play well, you keep playing. With Berube behind the bench, the Blues seemingly absorbed his mettle and did it all for each other. That can-do, fuck-you attitude carried them through a long postseason and to the ultimate prize.

7. Vladimir Tarasenko and His New Baby Stole Our Hearts
We all loved Vladi already, but the interviews after the game where he talked about his family were absolutely heart-warming. The Bluesman became a father for the third time last week and we got to see a picture of his new wee one just chillin' in the Stanley Cup. Could anything be any cuter?


8. The Onion Wrote a Great Story About Us
Last night the Onion dropped this bomb just after the Blues' victory: "St. Louis Officials Encourage Celebrating Blues Fans to Just Burn City Down And Finally End This." They thought we were going to riot no matter what — but we only riot for civil rights around here. For major victories we just get drunk.

Yeah, everyone loves to laugh at St. Louis, but who is laughing now? (Not Boston, that's for sure.)

9. And Speaking of Craig Berube ...
Craig Berube has First Nations heritage (his grandmother was Cree), which hasn't always made life easy. First Nations players have a well-earned reputation for toughness, yet they're almost always given the same lazy nickname: Chief. (Fan-favorite Jon "Nasty" Mirasty somehow escaped the name, but he may be the only one to do so.) The prejudice and outright racism First Nations people deal with in Canada and America runs through certain quarters of hockey as well, which is why it was a huge breakthrough in 2014 when the NHL had two First Nations coaches. (Ted Nolan, a member of the Garden River First Nation, was helming the Buffalo Sabres, while the Philadelphia Flyers were led by Craig Berube.) Last night's win, we'd posit, is a big breakthrough not only for Berube, but also for the First Nations.

10. Our Staffer Can Finally Wash His Disgusting Coffee Cup
Superstition caused our normally logical staffer, Paul Friswold, to skip washing his vintage NHL team logo coffee mug. He stopped allowing the thing anywhere near soap when the playoffs started and, well, it wasn't pretty. This morning he took a scrubber to the cup, releasing not only filth but many "coffee solids." Now Paul can again caffeinate in a sanitary fashion. 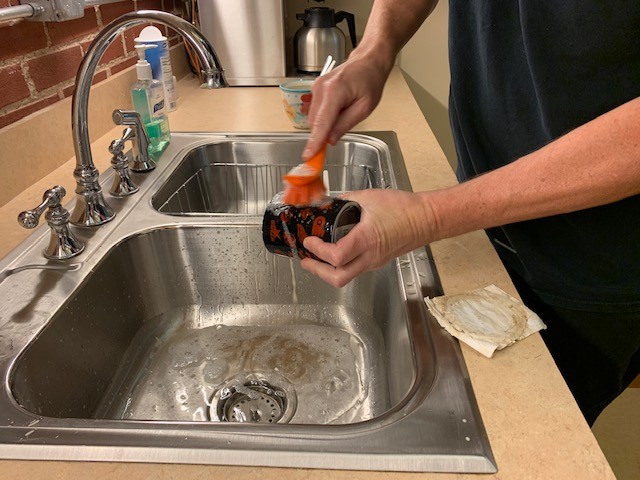