The Real Story Behind That Ozzy Osbourne Blues Jersey Mugshot

June 11, 2019 at 9:04 AM
comment
You never know when a night out will go from wild to legendary. But in Ozzy Osbourne’s case, one crazy night in 1984 became infamous. Osbourne was in the middle of the years-long Bark at the Moon tour in May 1984 when a night of drinking in Memphis, Tennessee, led to one of the greatest mugshots of all time.

So our boy Osbourne must’ve really been on one to stand out from the masses. Maybe the cops were picking on him. Or maybe they were just keeping an eye on him. Osbourne had already bitten the head off a bat and taken a leak on the Alamo. Only the Lord knows what his plans were for Beale Street.

And it’s not like his bright Blues jersey would’ve helped him blend in with the crowd down in Memphis. He’d played at the St. Louis Arena just a few months before, on February 9, 1984. Presumably he picked up the hot merch from his new favorite team while he was at the Checkerdome.

It proved a felicitous wardrobe choice three months later. That night, in Memphis, according to Ultimate Classic Rock, Osbourne “was arrested at 12:30 a.m. on a misdemeanor charge of public intoxication” and was held for five hours until he sobered up. Then he was released without a court date.

Memphis is nicer to their misbehaving rock stars than St. Louis. When douche lord Axl Rose came to St. Louis and acted a fool, we slapped a warrant on his ass, made him face a judge and forced him to give local charities $50,000. Down South, they just let icons go with a warning.

But Ozzy’s big night out in a Blues jersey remains at the forefront of St. Louis minds as we close in on victory. We've seen it around town lately on t-shirts, and everybody seems to get a good laugh out of it.

Here’s a photo of a t-shirt that was being sold at a bar on Washington Avenue during Game 6 on Sunday: 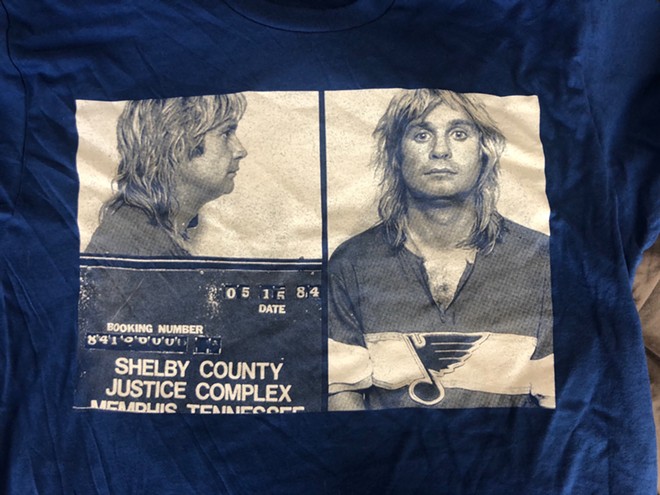 And here’s a tweet featuring a local man wearing his own version:

This legend made himself a custom T-shirt with ⁦@OzzyOsbourne⁩’s St. Louis Blues mug shot photo. pic.twitter.com/wDYJuV6ixu


Even Osbourne has gotten in on the action, posting his mugshot on Twitter and Facebook on Sunday night with the caption “Let’s Go Blues!”

It’s nice to know that Ozzy is on our side, as we’ve always been on his. And with the blessing of the Prince of Darkness, we are officially ready to win the Stanley Cup.

So when it all goes down tomorrow night, #PlayGloria if you must. And then play Sabbath.