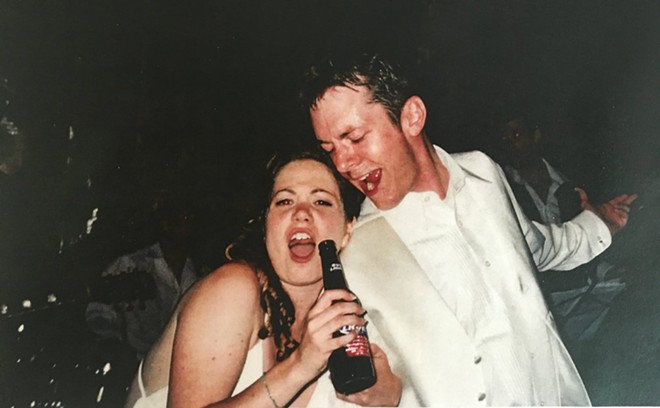 I’ll say it: I watched zero hockey games this year. The majority of my time and mental energy is dedicated to raising my three children and full-time job. And yet, something about this season caught my ear.

St. Louis has stolen my karaoke song. In what appears to be a total zeitgeist move on my part twelve years ago, I sang "Gloria" at the Double D at my bachelorette party. This proved an optimal choice as I prepared to enter marital bliss and start my family. I yelled at the top of my lungs with a beer in hand to a room full of people who weren’t paying any attention, a scenario foreshadowing my exact parenting style. And now, thanks to the Blues’ successful quest to win the Stanley Cup against whoever it is they’re playing, one of my of my favorite 80s songs is back in fashion. Not since the Cardinals headed to the World Series in ‘85 when the heat was on has a song so infiltrated the St. Louis sports scene. Sports, eh. '80s songs, heck ya!

Why is this the theme song of our beloved Blues? I don’t know! I don’t care! I just know that everywhere I turn, I hear Laura Branigan belting this (apparently) timeless beauty.

And it is everywhere. I heard it at the airport and the grocery store. It’s booming from the windows of my neighbor’s house and cars whizzing by on the street. Facebook and Instagram are filled with #playGloria videos of girl scout troops and high school jazz bands vying for the attention of their favorite hockey team. The song is even on rotation in my barre class, a modern-day heir to the jazzercize era of "Gloria"’s heyday. When the song comes on, I sing along as I sweat. My buns have never been made of such steel!

I was shocked to find out not everyone is a fan. Still basking in the fun while leaving the class, I overhead someone half my age and weight proclaim, “Five minutes before the class was over she played that stupid 'Gloria' song.”

I wanted to snap, "Young lady, you can take your bad attitude right out of this barre class. You wouldn’t know a Jennifer Beale breakdancing controversy if it bit you on the butt. Let’s just agree to disagree — you can keep your Cardi B and while I continue to revel in the comeback of Laura B." (I did not, but believe me when I say I wanted to.)

Anyway, it seems she’s in the minority. "Gloria" fever has spread through St. Louis. Let’s face (off) it. "Gloria" is the perfect song for this moment.

And fittingly for a team named after the blues, Gloria sure has some woes. According to Branigan, the song is about “a girl that’s running too fast for her own steps.”

As one of my Facebook friends posted, asking for more details of Gloria’s troubles, “Someone has her number and is calling her?” Though we aren’t privy to the exact details of her circumstances, we know that she needs an alias! She is on the run now! The run! Whatever Gloria is dealing with, this seems to be a an intense and dire situation — more than likely enough to give a girl the blues!

Despite my near total ignorance of anything that’s taken place on the actual ice (and while we’re at it, can someone please enlighten me as to why this season still going on while it’s 90 degrees outside?), I do hope the Blues take it all. What a sweet moment it will be for "Gloria" to ring through the streets of St. Louis. You know my kids and I will be dancing along in my minivan — even if, next year, a whole city's worth of sports fans are signing up for my karaoke song.

Elizabeth Macanufo is a non-profit professional living in Richmond Heights with her husband and three children. She alternates between trying to stay awake after 9:30 p.m. and dragging her fellow book club members onto the dance floor. She can be reached at elizabeth.macanufo@gmail.com.