June's here, and the Blues are still playing hockey. If you can get tickets to the game — or just don't care for hockey, as if that's possible — there are some great arts and cultural events this weekend, including Strange Folk Festival's return to Carondelet Park and a current Broadway hit playing right here in St. Louis.

Read on for all the details.

1. How to Be Cool
How is a musical like the wildly popular Be More Chill lighting up Broadway and also opening in St. Louis?

"Be More Chill was originally commissioned by Two River Theater in New Jersey, and after the run the show didn't get any takers to go Broadway," Scott Miller, co-artistic director of New Line Theatre, explains. "So they did a cast album and released the rights for colleges and regional theaters — and then they got an offer for Off-Broadway, and from there it went to Broadway."

Miller also isn't surprised that Be More Chill was a slow starter. "It doesn't feel like Broadway — it kind of tricks the audience," Miller enthuses with the passion of a musical theater lifer. "It seems like a rom-com about a lovable loser who wants to get the girl but can't. And then the Squip comes in at the end of Act I, and you realize it's a sci-fi thriller!

"The Squip" is an an acronym for Super Quantum Unit Intel Processor. In the show, teenaged Jeremy is a loser on the outside of high school society. When he learns he can swallow a tiny Japanese supercomputer — the Squip — that will upgrade him with a customized internal voice advising him on how to be more chill, he takes it. The musical is based on a novel by Ned Vizzini, and it deals with teen depression, the digital age and bullying, all filtered through '50s sci-fi and the teen movies of the '90s.

2. Get Strange
Strange Folk Festival's free-range art party, the Big Glamp, is back for another year. Carondelet Park (3900 Holly Hills Boulevard; www.strangefolkfestival.com) once again welcomes the arty and crafty makers and shakers, with a pop-up coffee house on site (Kitchen House Coffee, which has a location in nearby Patch, runs the joint) and live music from Superfun Rocket Ship Yeah Yeah, Aaron Jacobs and Spin Cycle DJs. While you're wandering from artist tent to tent and perhaps enjoying a summer picnic, keep your eyes peeled for fairy doors. Handmade wee little doors have been hidden throughout the park, with supplies stashed nearby so you can make your own. The Big Glamp takes place from 4 to 9 p.m. Friday, noon to 9 p.m. Saturday and noon to 6 p.m. Sunday (May 31 to June 2). Admission is free.

3. Ah, Madeleine
Charlie Johnson is a no-nonsense guy. He was raised in rural Indiana with the values of hard work and straight talk. So when his daughter-in-law makes a snide comment about him dipping his Starbucks madeleine in his coffee and then briefly lectures him on his "Proustian moment," Charlie decides to do something about it. Namely, he determines to read Marcel Proust's famous book In Search of Lost Time by next Christmas, so that he and his daughter-in-law can discuss it together. Amy Crider's one-man play Charlie Johnson Reads All of Proust makes its St. Louis debut thanks to Midnight Company. The monologue is performed by Joe Hanrahan at 8 p.m. Thursday through Saturday (May 30 to June 15) at the Kranzberg Fine Arts Center (501 North Grand Boulevard; www.midnightcompany.com). Tickets are $20.

4. Father Knows Best?
The Duke of Mantua is well known for pursuing any woman who catches his eye, even if that woman is married to one of his own courtiers. The Duke's jester, Rigoletto, mocks the cuckolded men at court afterward, which eventually spurs them to take their revenge on the easier target. Rigoletto has been spotted with a beautiful younger woman. Certain she is his mistress, the men decide to abduct this woman to teach Rigoletto a lesson. Their action sets off a series of mistaken identities and counterplots that result in the death of an innocent. Giuseppe Verdi's Rigoletto is a dark tragedy filled with the maestro's trademark beautiful melodies. Opera Theatre St. Louis presents Rigoletto at 8 p.m. Saturday, June 1, at the Loretto-Hilton Center (130 Edgar Road; www.opera-stl.org). The show is performed six more times in repertory through June 30. Tickets are $25 to $129. 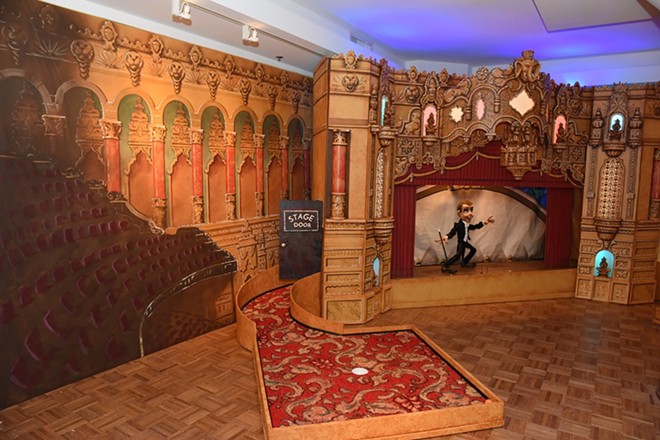 5. Fore!
Miniature golf, that salve for many a dull summer night, returns to the Sheldon Galleries (3648 Washington Boulevard; www.thesheldon.org) this summer, with creative and challenging holes designed by artists. The indoor golf course will fill the Sheldon's second floor, providing a welcome respite from the summer heat.

Golf the Galleries officially opens Saturday, June 1, with nine all-new holes. Justin King, creator of last year's recycled cardboard fantasia Serengeti Park, will be back with a new hole that's again made of old cardboard. King's Kraken's Cove has a giant octopus and other sea life; players must thread their ball through the creature's tentacles to sink their putt. Master puppeteer and theater scene designer Ryan Marshall will offer The Little Foxes, a scaled-down version of the Fox Theatre, starring marionette versions of Louis Laclede and a skulk of tiny foxes. And Constance Vale, architectural director of the Factory of Smoke and Mirrors, will offer The Mat, the Tapestry and the Magic Carpet, which inverts the golf course. Carpeted surfaces travel up the wall and are suspended above the floor, so that the playing surface becomes the obstacle.

6. An Aussie Boy
Singer, songwriter and all-around entertainer Peter Allen made it a long way in his too-short life. Born Peter Woolnough in Tenterfield, Australia, he changed his name when he entered show biz in the early '60s. While performing in a Hong Kong hotel one fateful night, Allen dazzled Judy Garland, who was in the audience. Garland brought Allen back to America as her opening act, which launched his international career. Allen also embarked on an ill-fated romance and marriage with Garland's daughter, Liza Minnelli, although Mama always had some suspicions about his sexual preferences. In his professional life, Allen wrote a ton of hit songs, including "I Honestly Love You" and "Don't Cry Out Loud." Both of these songs and an armful of Allen's other hits are featured in the jukebox musical The Boy From Oz, which retells Allen's life story through his music. Stages St. Louis opens its new season with the show, which is performed Tuesday through Sunday (May 31 to June 30) at the Robert G. Reim Theatre (111 South Geyer Road, Kirkwood; www.stagesstlouis.org). Tickets are $25 to $65.

7. Hunting the Past
When an unknown and injured woman turns up at the door of Maria's remote home, she is concerned. Her elderly father, Anselm, has been in the news a great deal lately. Anselm was accused of being an SS soldier active at Auschwitz, but never convicted. Still, Maria lets the wounded woman, Lena, into their home to get medical attention. But Lena immediately turns on her hosts and demands Anselm confess to the atrocities he's long denied. Astrid Schult's taut drama Winter Hunt takes place in a single location, with three characters attempting to find the truth about a past only one of them experienced. Winter Hunt is shown at 4 p.m. Tuesday, June 4, at the Landmark Plaza Frontenac Cinema (1701 South Lindbergh Boulevard, Frontenac) as part of the St. Louis Jewish Film Festival. Tickets are $12 to $13. For the full schedule, visit www.stljewishfilmfestival.org.