Be More Chill Is Hot on Broadway Right Now — and Also Opening in St. Louis 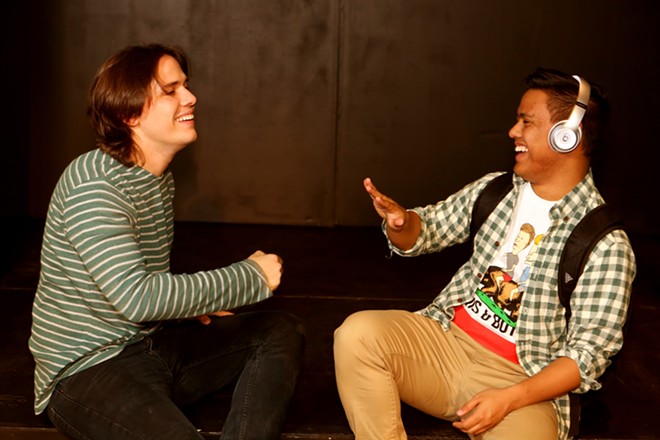 Scott Miller, co-artistic director of New Line Theatre, says it all comes down to timing. "Be More Chill was originally commissioned by Two River Theater in New jersey, and after the run the show didn't get any takers to go Broadway," Miller explains. "So they did a cast album and released the rights for colleges and regional theaters — and then they got an offer for Off Broadway, and from there it went to Broadway."

The big league's slow reaction time is to our benefit. But Miller also isn't surprised that Be More Chill was a slow starter.

"It doesn't feel like Broadway — it kind of tricks the audience," Miller enthuses with the passion of a musical theater lifer. "It seems like a rom-com about a lovable loser who wants to get the girl but can’t. And then the Squip comes in at the end of Act I, and you realize it's a sci-fi thriller!

“They sneak up on you with it," he finishes.

“The Squip” is an an acronym for Super Quantum Unit Intel Processor. In the show, teenaged Jeremy is a loser on the outside of high school society. When he learns he can swallow a tiny Japanese supercomputer — the Squip — that will upgrade him with a customized internal voice advising him on how to be more chill, he takes it. The musical is based on a novel by Ned Vizzini, and it deals with teen depression, the digital age and bullying, all filtered through '50s sci-fi and the teen movies of the '90s.

It's the exact sort of rock & roll musical Miller loves to sink his teeth into, and with his co-artistic director Mike Dowdy-Windsor taking the lead as director, he has been left with more time to dig into what makes Be More Chill and its young cast (more than half of which are first time New Liners) tick.

"The interesting thing about this is it doesn't show off, lyrically," offers Miller. "There are no interior rhymes, no tricks. They don't sound like lyrics; they sound like high school kids talking. The show really treats these kids with respect, and if feels real. The kids say dumb thing and do dumb things."