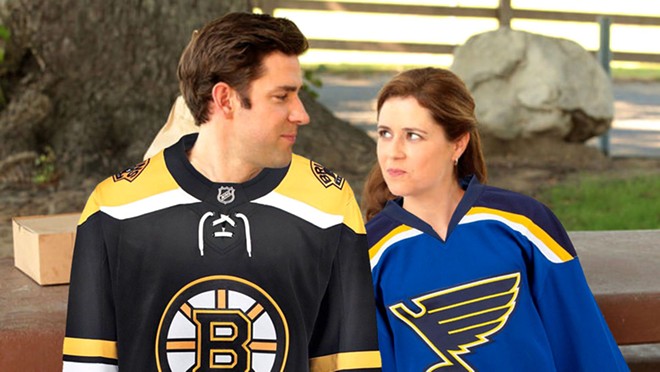 They weathered the storm that was Athlead. They got over Pam's awkwardly close friendship with that boom mic operator. They even survived the Rectangle Holding Incident, even though Jim was being a real bitch about that one.

But Jim Halpert and Pam Beesly may now be facing their toughest challenge yet: the Blues-Bruins series for the Stanley Cup.

That's because the actors behind the two characters find themselves on opposite sides of the issue. Jenna Fischer, a St. Louis native, is squarely on the Blues' side (and, therefore, on the right side of history), whereas John Krasinski was born in Boston, and is rooting for the Bruins.

Their differences were made apparent after Krasinski retweeted a post from the Blues' Twitter account showing Fischer in a Blues jersey with a simple message: "Uh-oh."

To drive the point home, Krasinski then shared a side-by-side comparison: himself in a Bruins jersey, his TV bride clad in Blues blue.

Fischer even responded, tweeting that things are going to be "interesting." (And by interesting, we're sure she meant that it would suck for Krasinski when his team goes down to defeat.)

This is going to be interesting... https://t.co/fuc5tt2yvp


Time will tell if one of the more storied fictional romances in television history can survive this one, or if, instead, Jim is going to be a big baby when the Blues inevitably take home the Cup. Either way, things are definitely going to be really hard for a while.

Er, ahem: That's what she said.