Mr. Wiggy and Pepper LaPew Are the Friendly Pigs of Benton Park West 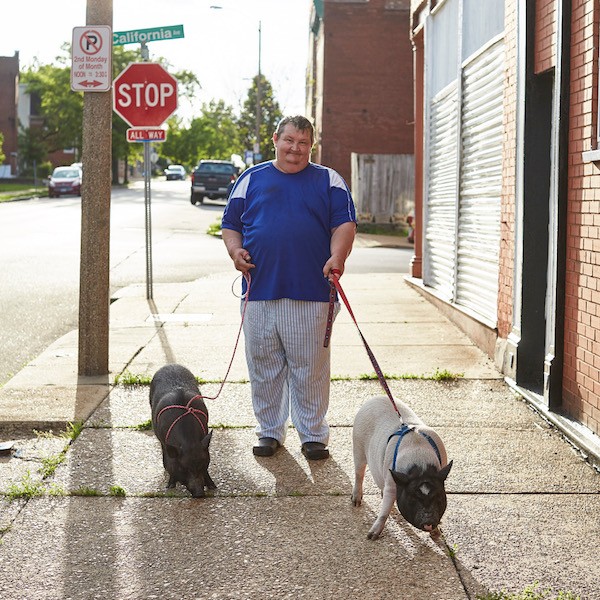 If you're feeling lonely, a pig can be a marvelous thing. Christopher Muse has two, and he loves their company. "I had dogs, but pigs are just like us when it comes to a social network. They want to cuddle, they'll talk back to you!" he enthuses. Even more than that, he loves how they help him meet people.

Muse, a St. Louis native who lives in Benton Park West, says he suffers from extreme social anxiety. Before the pigs came into his life, "I was really closed off, I really was. I rarely left my room because I didn't go anywhere. I didn't go shopping, didn't want to eat, didn't want to do anything."

Things have changed. Walking them on their leashes, he says, "Everyone wants to say hi. And I need that!" Beyond that, they give him purpose: "It's like micromanaging everybody, like a bunch of school kids. You really gotta stay on top of them all the time."

Mr. Wiggy, the black pig, came into Muse's life as a baby. "He was ten pounds when I got him," he reports. "He's 100 pounds now." Pepper LaPew, the white one, technically belongs to his roommate, a blind woman he moved in with after his mother died two years ago. "I just started walking her on a leash two weeks ago. She would always scream when you go to put it on her; now she handles it. She’s very curious."

"We just walk around that area and just get gobs of people come over and pet him and stuff," he says. "It’s awesome. Then I go to the Loop, and I walk him there by the theater and then get breakfast at the Peacock Diner then get in the car and come home."

Seeing the pigs' intelligence and good manners has changed his own thinking, and he hopes to encourage others to rethink meat eating as well. "He’s a really good ambassador for pigs," he says of Mr. Wiggy. But not everyone is persuaded. "Occasionally you get a jerk who says, ‘Mmm, get me some bacon!’ It’s very offensive. Would you say something like that about your own pet?"

For the record, the pair are not emotional support pigs. But Mr. Wiggy maybe should be. "He’s not certified yet, but I’m sure I could get him certified because he’s just that awesome," says his proud owner. 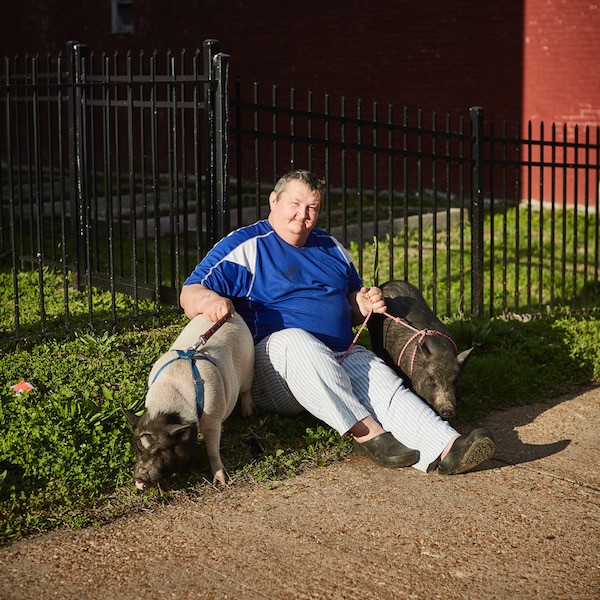 Theo Welling conducted this interview as part of "The Lede" column that appears in the RFT every Wednesday. For more of his work, pick up a print edition.