The City Museum Now Has a New Website, With Pictures 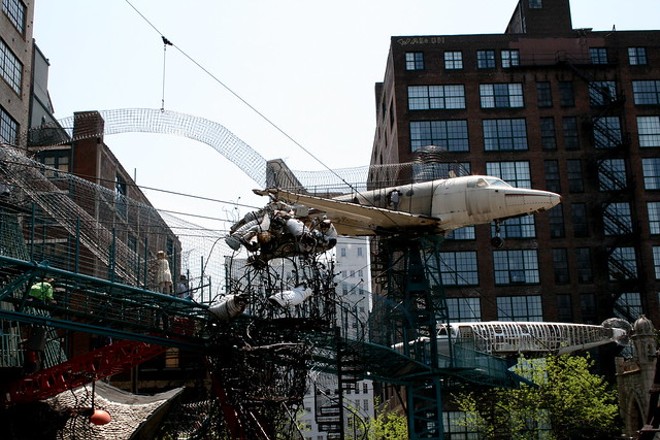 Bob Cassilly, the visionary founder of the City Museum (750 N. 16th Street, 314-231-2489), didn't like websites, and especially disliked websites with pictures. Which is one reason the City Museum's website was always pretty basic: hours, prices, information on special event rentals.

But the City Museum now has new owners, and they wanted a website that might actually give visitors an idea what to expect.

"There has always been some institutional pushback against having a website," explains Richard Callow, the museum's longtime spokesman. "Instead, Instagram, Facebook and Twitter got most of the attention. And the website was more of an artifact than a communications effort. But, the new owners explained PATIENTLY that selling tickets and season passes on-line (instead of in the chaos that was our ticket entrance) was an organizational priority."

And so Premier Parks LLC got their wish, as those who control the purse strings tend to do (the hapless Rex Sinquefield being a major exception). The new season passes introduced by the Canadian owners, just $69.99 for unlimited visits, are now available online, as are regular one-day tickets.

Still, Callow says, the owners didn't take a heavy hand with the site's new additions. They deferred to staff on the details, putting Maria Cassilly in charge. (Married to Max Cassilly, Maria is operations manager and chief librarian at Beatnik Bob's.)

The result of that effort, a roughly month-long project, launched April 25, though the final piece, a new galleries page showing off the museum's highlights, finally went live last Friday.

Of particular interest: the museum's history page, which includes fascinating tidbit that even frequent visitors may be unaware of. Did you know you can see the handprints of the original installers on that 40-foot-long Louis Sullivan cornice on the second floor? Or that welders working above that amazing Wurlitzer organ accidentally set it on fire the first week after it was installed?

Or, to continue the fire theme, did you know that at the museum's tenth anniversary party in 2007, "fire spinners accidentally incinerated a late-model Ford Taurus in the parking lot"? Hey, you do now. And if that total commitment to art-related hijinks isn't inducement to buy a season pass, pronto, perhaps you are simply not the City Museum type.