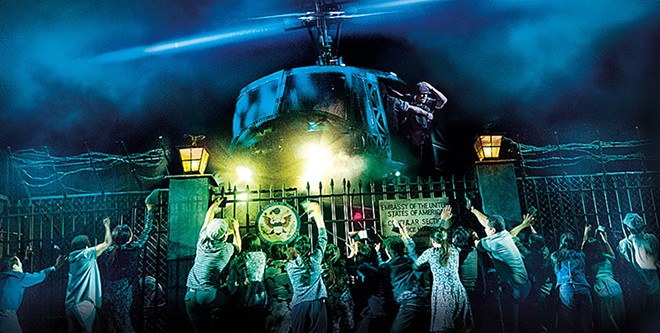 We're staring down a busy weekend with the return of the American Muslim Art Show, modern dance company Pilobolus coming back with a breathtaking show and a one-woman version of <i>Titanic</i>.

1. Octolus Riff
After 31 years of mocking terrible films for the amusement of audiences, you'd think the RiffTrax/Mystery Science Theater 3000 crew would be out of bad movies. Instead, the RiffTrax guys keep turning up stinkers. RiffTrax Live: Octaman will see Mike Nelson, Bill Corbett and Kevin Murphy dogging the 1971 octopoid tragedy Octaman for a national audience at 7 p.m. Thursday, April 18, at the Marcus Wehrenberg Ronnies Cine (5320 South Lindbergh Boulevard; www.fathomevents.com). Writer/director Harry Essex's film is about an irradiated octopus man (created by special effects genius Rick Baker, then very young) who seeks revenge on the scientists who stole its offspring. Never before has a guy in a rubber suit with flimsy tentacles terrorized such a large audience. Tickets for the live broadcast are $15.67.

2. Mmm, Brainy
Dan O'Bannon's Return of the Living Dead is not really a sequel to Night of the Living Dead, although the original script for it was written by Night's John Russo. O'Bannon punched up the story with comedy and a slightly lighter touch with the horror. A pair of medical supply company employees in Louisville, Kentucky, accidentally release the remains of a botched military experiment, infecting a nearby graveyard. A group of vintage 1980s punks are hanging out in the cemetery when the dead start crawling out of their graves, which sets off the requisite fight for survival. Return of the Living Dead's zombies pioneered the whole "eating brains" thing, which adds that extra frisson of excitement to the proceedings, as does the soundtrack of classic punk, which includes the Cramps, 45 Grave and T.S.O.L. The film screens at 7:30 p.m. Thursday, April 18, at Webster University's Moore Auditorium (470 East Lockwood Avenue; www.webster.edu/film-series). Tickets are $5 to $7.

3.WWEeee!
Just nine days after the marathon that was Wrestlemania 35 (seven hours of wrasslin', y'all), WWE Live pulls into St. Louis with a host of RAW stars. Finn Balor is scheduled to fight Elias, women's tag team champs Bayley & Sasha Banks take on the Riott Squad and RAW tag team champs The Revival will mix it up with someone. The card is subject to change, but whoever shows up will surely keep things interesting. WWE Live starts at 7:30 p.m. Friday, April 19, at the Enterprise Center (1401 Clark Avenue; www.enterprisecenter.com). Tickets are $20 to $115.

4. Her Heart Goes On
James Cameron's blockbuster Titanic blended reality and fiction to create one of the greatest romances of cinema history. In the movie we see the elderly Rose Dawson remember the events leading up to that fateful night in the north Atlantic, and her tragic love for Jack Dawson. Will Bonfiglio and Lucy Cashion's new play Never Let Go picks up Rose's story 24 years after the sinking of the Titanic. Still grieving Jack, she's nevertheless pushing forward with her plan to become an Academy Award-winning actress. That's why Rose is here tonight, pitching her story to a team of possible investors and producers. As she recounts her tale, the lines between the past and present grow fuzzy. Rachel Tibbetts stars in the one-woman show Never Let Go. The play is performed at 8 p.m. Thursday to Saturday (April 18 to 20) at the Monocle (4510 Manchester Avenue; www.eratheatre.org) and 10 p.m. Friday and Saturday (April 26 and 27) at the Improv Shop (3960 Chouteau Avenue). Tickets are $15 to $20.

5. Out of the Shadows
Contemporary dance company Pilobolus created its multimedia project Shadowland — The New Adventure in conjunction with Steven Banks, the head writer for SpongeBob SquarePants. The story takes place in the land of shadows, where two people go on a quest to save an imaginary bird. The dancers create shadow figures — cityscapes, strange animals — by joining together in unexpected ways behind a backlit screen, while other cast members perform in front of the screen. It's a mind-bending show that combines acrobatics, humor, animation and a love story. Dance St. Louis presents Shadowland — The New Adventure at 7:30 p.m. Saturday, April 20, at the University of Missouri-St. Louis' Touhill Performing Arts Center (1 University Drive at Natural Bridge Road; www.touhill.org). Tickets are $35 to $69.

6. The Art of Modesty
The third annual Creativity & Identity: An American Muslim Art Exhibition returns this week to celebrate the artistic achievements of the local Muslim community. More than two dozen artists will exhibit their work, and they'll be joined by several performers, including poets, spoken-word artists and practitioners of Nasheed, or traditional Islamic singing. New this year is the Modest Muslim Women's Fashion Show, which showcases clothing by fashion designer Mojda Sidiqi. The garments in the show are feminine and beautiful without being overly revealing. Traditional garb worn by Muslim women will also be featured in the show. Creativity & Identity takes place from 6 to 9:30 p.m. Saturday, April 20, at the Sheldon (3648 Washington Boulevard; www.cair-mo.org/art). Tickets are $5 to $15 and include food and access to the interactive children's section (children five and younger get in free).

7. Saigon Love Song
In the midst of the Vietnam War, G.I. Chris meets Kim, a war orphan. Kim works in a bar run by the opportunistic man known as the Engineer, and she's essentially his property. Chris' tour is almost over, and even if it wasn't he'll be leaving in a matter of days when Saigon falls to the communists. Here at the end of the world, Kim and Chris find love — at least for one night. But their union has unintended consequences when the communists take over, and Kim is left behind to deal with them. The revival of Claude-Michel Schönberg and Alain Boublil's bombastic musical Miss Saigon returns to the Fox Theatre (527 North Grand Boulevard; www.fabulousfox.com) for a two-week run. Performances are at 7:30 p.m. Tuesday through Friday, 2 and 7:30 p.m. Saturday and 1 and 6:30 p.m. Sunday (April 23 to May 4). There's a final matinee at 1 p.m. Sunday, May 5, and tickets are $30 to $99.