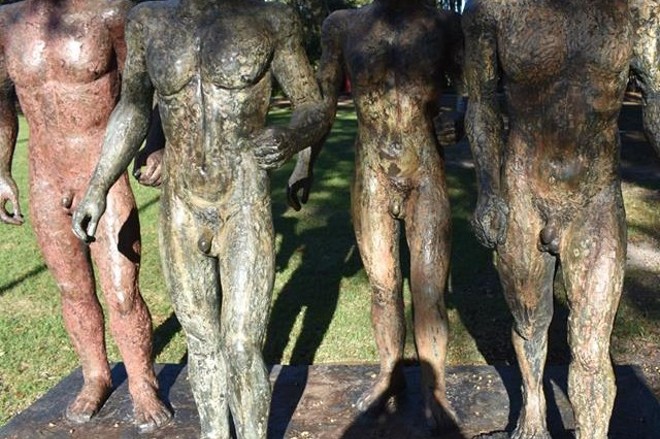 This week, Mayor Harold Sanger and Clayton's Board of Aldermen rejected an offer by the Saint Louis Art Museum to display a seven-foot-tall bronze sculpture of a naked man by the name of "Young Siegfried” at the entrance to Oak Knoll Park.

The Post-Dispatch reports that the museum had offered to loan the piece, a 1928 work by Austrian sculptor Franz Seifert, to the city for a year, with the option to renew the terms if the people of Clayton so chose. If approved, the tall nudist wielding a sword would be installed at the park's entrance near the intersection of Big Bend Boulevard and Clayton Road.

But Clayton roundly rejected the offer. Alderwoman Joanne Boulton said Tuesday, “This isn’t art we want to put on display in a public area of Clayton." And Mayor Sanger noted that the city already has a nude male statue, Fernando Botero’s Man on a Horse, on display at the intersection of Hanley Road and Wydown Boulevard. That piece rankled some residents upon its installation in 2005, with concern that it could poison the minds of the city's children. The suburb apparently decided not to double down on the outrage.

Now, some might say that roughly half the population already has wieners of their own anyway, and that any kid with access to Play-Doh has assuredly already himself sculpted dozens of wieners (they told you they were "snakes" — they lie). They might add that the owners of these particular wieners are merely statues incapable of harming anyone with their nudity, and that America is filled with joyless prudes and that Clayton specifically houses an inordinately high concentration of them.

But all of those critiques miss the larger point, the real heart of the matter: These Clayton specimens are sub-par dicks at best.

Yes, Clayton is right to reject the installation of lackluster ding-dongs on its streets. We can only surmise that Man on a Horse itself rightly soured the citizenry on the idea. Just look at this fatty — not exactly the picture of male virility (and the horse blocks the goods anyway, a shame). “Young Siegfried,” meanwhile, has his proportionally tiny package obscured by leaves. What's even the point?

So in solidarity with the good people of Clayton and their unassailable taste in dicks, we at the RFT present five naked dude statues with better wieners than the ones Clayton rejected. Rather than deride the suburb as filled with anti-art Philistines, perhaps the good folks at the Saint Louis Art Museum should offer something along these lines instead: 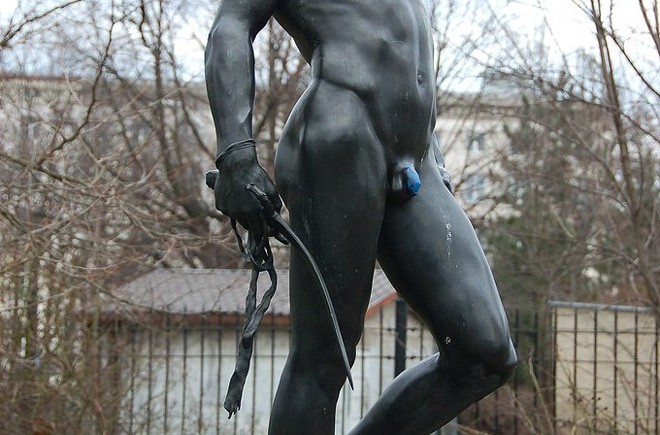 This ding-dong, attached to a statue of Perseus in Warsaw's Ujazdowski Park, is as elegant as it is understated. It's the kind of wiener that doesn't make a big fuss about itself, but refuses to hide its light under a bushel, either. It would look great in front of the Ritz-Carlton in Carondelet Plaza.

This statue, on display in Paris and entitled Hercules Killing the Birds of Lake Stymphalis, really puts its magnificent wang at the forefront by featuring its owner in a near-splits pose. We at the RFT don't have a whole lot of experience in archery, and therefore cannot attest as to whether this stance offers any advantages on that front, but it is certainly ideal for showing off the goods.

Four for the price of one! This piece on display at the sculpture garden in New Orleans' City Park provides the most bang for the art lover's buck, with four times the glorious dongs that most nude male sculptures provide.

In addition, it really highlights the freedom and joy that can be found through a simple naked walk through nature with three of your closest buds. Would look amazing in front of the courthouse!

What this Roman statue of Apollo lacks in size he more than makes up for in the multiple penis-shaped objects he's currently carrying on his person. Hey, sometimes we all could use a little assistance, right fellas?

OK, maybe this statue from an open-air museum in Oslo, Norway would be bad for children — he is, after all, actively dropkicking an infant. But admit it: You just can't deny that sweet stone dick. They should install this one directly across from the mayor's house.