Now we're talking, April. Baseball is back on the menu, Wizard World welcomes the famous and exotic and Terry Gilliam's long-gestating film about fantasy, reality and Don Quixote finally screens locally. Read on for more gems.

1. All Together Now
Baseball again returns to St. Louis — one day later than anticipated, thanks to inclement weather — at 3:15 p.m. Friday, April 5, when the Cardinals take on the visiting San Diego Padres at Busch Stadium (700 Clark Avenue; www.stlcardinals.com). Y98.1-FM, NOW 96.3-FN and 102.5 KEZK-FM host an Opening Day Rally starting at 10 a.m. in Kiener Plaza (601 Clark Avenue), with food, drinks, games, entertainment and free admission. This is a day when St. Louis comes together to celebrate its shared passion, whether you're at the game, in one of the city's many bars or surreptitiously watching online while "working." Remaining tickets for the game are $50 to $250, and the Cards play the Padres again at 1:15 p.m. Saturday and Sunday (April 6 and 7).

2. Dream Big
Inspired by the early careers of various Motown girl groups, Henry Krieger and Tom Eyen's Dreamgirls has become one of the most beloved musicals of the modern era. In it the Dreamettes, a young trio of singers from Chicago, attempts to jump-start their musical career by winning Amateur Night at the famous Apollo Theater in New York. Instead Effie, Deena and Lorrel find a manager in Curtis, who dreams of guiding a black group into the pop realm, where millions of dollars can be made with the right song, look and sound. As the Dreamettes work their way closer to stardom, they encounter jealousy, creative differences, love and betrayal. Stray Dog Theatre presents the sound sensation Dreamgirls at 8 p.m. Thursday through Saturday (April 4 to 20) at the Tower Grove Abbey (2336 Tennessee Avenue; www.straydogtheatre.org). There are two additional shows at 2 p.m. Sunday, April 14, and at 8 p.m. Wednesday, April 17. Tickets are $25 to $30.

3. Is that a Dagger?
St. Louis Shakespeare is on the move again. The venerable company now mounts its shows in Tower Grove Baptist Church (4257 Magnolia Avenue; www.stlshakespeare.org), which is where you can see its season-ending performance of Shakespeare's Othello. The powerful and charismatic Reginald Pierre stars as Othello, the noble Moorish soldier who valiantly defends his adopted city of Venice. One of Othello's soldiers, Iago, has a deep and abiding loathing for his commanding officer, who is unaware of his enmity. While Othello goes about the business of defending Venice's concerns from the Turks, Iago plots to destroy his hated foe through the use of cat's paws and schemes. Caught up in a web of plots, Othello destroys the person he most loves. Othello is performed at 8 p.m. Friday and Saturday and 7:30 p.m. Sunday (April 5 to 13), and tickets are $15 to $20.

4. Wind-Up Wonder
The Arthur Saint-Léon and Léo Delibes ballet Coppélia is inspired by two E.T.A. Hoffmann stories, so you know going in something magical and macabre is about to happen. Sweethearts Franz and Swanhilda plan to marry soon, but Swanhilda notices her betrothed seems infatuated with the mysterious girl who sits all day on the balcony of Dr. Coppéius' house. Furious, Swanhilda breaks into the home with some of her friends, where they find numerous life-like mechanical dolls. On the balcony, they discover the doctor's diabolical secret plan for the doll, and Swanhilda hatches a quick plan to save her beau, despite his wandering eye. The Saint Louis Ballet presents Coppélia at 7:30 p.m. Friday, 2 and 7:30 p.m. Saturday and 2 p.m. Sunday (April 5 to 7) at the Touhill Performing Arts Center on the University of Missouri-St. Louis campus (1 University Drive at Natural Bridge Road; www.stlouisballet.org). Tickets are $25 to $69.

5. Get Wet with the Wizard
As you may have heard, Jason Momoa — DC's Aquaman (sploosh) — will be in St. Louis for this year's Wizard World St. Louis pop-culture convention. If you want to get a photo with him, act fast — several sessions have already sold out, and remaining slots are $125 to $150. But if you can't or don't get a spot, don't worry; there's lots of other stuff to do and see and buy. A double handful of comic-book artists will be present to sign and talk about their work, including Arvell Jones, Phil Ortiz and Rich Burchett, as well as celebrities such as Sean Astin (Lord of the Rings), Ernie Hudson (the fourth Ghostbuster) and Saturday Night Live alum Chris Kattan. There will be cosplay, pop-culture merch galore, comic books, seminars on everything from Doctor Who to cosplay foam sculpture. There will also be live entertainment hosted by Kato Kaelin (yes, really). Wizard World takes place from 4 to 9 p.m. Friday, 10 a.m. to 7 p.m. Saturday and 10 a.m. to 4 p.m. Sunday (April 5 to 7) at the America's Center Conventions Complex (701 Convention Plaza; www.wizardworld.com). Tickets are $39.99 to $54.99 for individual days, or $79 for a three-day pass. Numerous priority and VIP options are available.

6. Pics or It Didn't Happen
In the aftermath of World War II, the scientific community raced to solve the mystery of DNA. Scientists knew what it was and that it was responsible for passing down genetic information to the next generation, but no one knew the mechanism for this "secret of life." English chemist Rosalind Franklin was a leading x-ray crystallographer, using a method of diffracting x-rays through a crystal to get a picture of its structure. Her expertise was put to use at King's College, where she was assigned to the DNA problem, and also directed to supervise the work of PhD student Raymond Gosling. When the scientific team of Francis Crick and James Watson examined some of Gosling's photographs, they had an epiphany: DNA could be a double helix. What the duo didn't know was that they weren't looking at one of Gosling's photos — it was Franklin's work. How Rosalind Franklin was omitted from her own discovery is the subject of Anna Ziegler's drama Photograph 51. It's a story of interpersonal conflicts, self-doubt and the difficulties of being a woman in a man's field. West End Player's Guild presents Photograph 51 at 8 p.m. Thursday through Saturday and 2 p.m. Sunday (April 5 to 14) at the Union Avenue Christian Church (733 North Union Boulevard; www.westendplayers.org). Tickets are $20 to $25 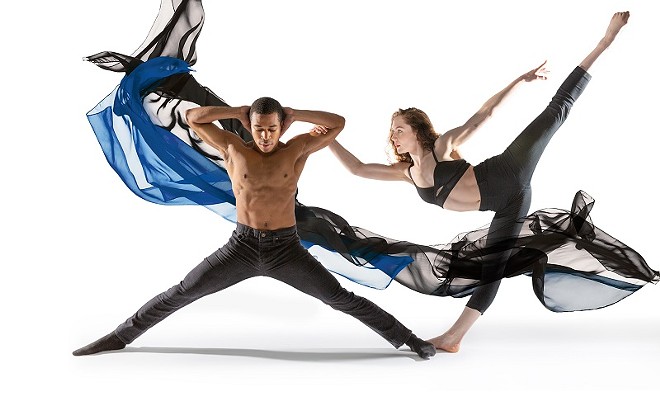 7. Live and Local
For its new performance Footnotes, the Big Muddy Dance Company chose to pair the music of St. Louis-based musicians with new choreography by Shannon Alvis, Samuel Asher Kunzman and Prince Lyons. The company will dance to the sounds of composer Noah Valenti, Steph Plant and the Leonas, Mile Davis and the live sounds of the Jazz St. Louis Student Musician Ensemble. Hopefully the all-local production becomes an annual event on Big Muddy's calendar. Performances of Footnotes take place at 8 p.m. Saturday and 2 p.m. Sunday (April 6 and 7) at the Grandel (3610 Grandel Square; www.thebigmuddydanceco.org). Tickets are $25 to $35.

8. Fantasy Is Reality
Terry Gilliam's The Man Who Killed Don Quixote was known for years as "the film that couldn't get made." Funding trouble, a flash flood and actor misfortune plagued every attempt to commit the concept to celluloid since Gilliam first conceived it back in 1989. After decades of trouble and a documentary about the non-existent movie, it improbably premiered at the 2018 Cannes Film Festival. Loosely adapted from Don Quixote, and inspired by its central conceit of a man who can't tell reality from dreams anymore, the film follows a troubled American director (Adam Driver) who meets a Spanish cobbler (Jonathan Pryce) who think he's Don Quixote. The duo undertake a quest that forces them both to recognize their mistakes and face the truth about life. Fathom Events presents the long-awaited The Man Who Killed Don Quixote at 7 p.m. Wednesday, April 10, at the Marcus Wehrenberg Ronnies Cine (5320 South Lindbergh Boulevard; www.fathomevents.com). Tickets are $13.45.