The Best Things to Do in St. Louis This Week, March 29 to April 2

What, April already? 2019 isn't wasting any time, so let's go. It's a week of plays, a new film fest and a celebration of the always-in-style lager. If none of that strikes your fancy, well, there's always next week.

1. Life After War
Sarah and James were romantic partners and work partners while covering the war in Iraq, but James had to leave when the stress became too much. Then Sarah was caught in a bomb blast. She's now back in America recuperating from her injuries, but getting physically healthy is just one thing. Recovering her mental health may be more challenging. James thinks they should seize this opportunity to settle down and start a family, but is that even possible in a world with so much violence? The idea of a normal future is alien, and beyond that, there's a betrayal in their past that neither will speak about. Donald Margulies' Time Stands Still is about a damaged couple trying to become whole and the aftermath of war. The New Jewish Theatre presents the drama at 7:30 p.m. Wednesday and Thursday, 8 p.m. Saturday and 2 p.m. Sunday (March 28 through April 14) at the Wool Studio Theatre in the Jewish Community Center (2 Millstone Campus Drive, Creve Coeur; www.newjewishtheatre.org). Tickets are $42 to $45.

2. Marking Time
Japanese butoh dancing is spiritually opposed to definition or formalization, but it's generally characterized by playful and grotesque imagery and very slow, controlled movements. For Shifting Time, the new dance concert by Karlovsky & Company Dance, butoh and Western post-modern dance provide the inspiration. The dancers will incorporate the different ways in which humans experience time and the larger scale of ecological time. The last hour at work on Friday is perceived quite differently from the Monday lunch hour, for example. Shifting Time uses original choreography by Dawn Karlovsky and guest collaborator Megan Nicely. Performances are at 7:30 p.m. Friday and Saturday (March 29 and 30) at the Grandel Theatre (3610 Grandel Square; www.karlovskydance.org). Tickets are $15 to $20. 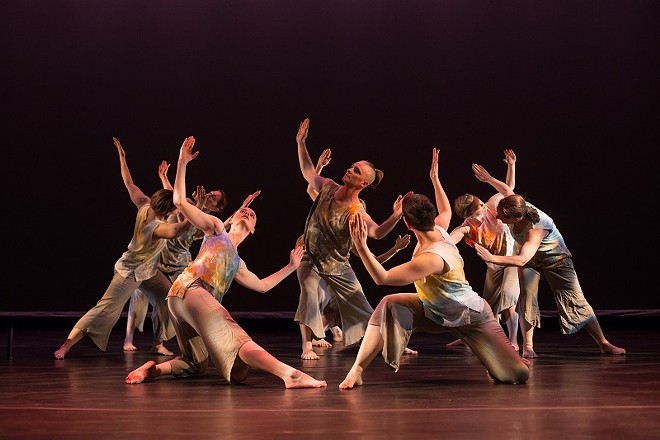 3. Interior: Benton Park
St. Louis has a strong tradition of locally made films, thanks to the St. Louis Filmmakers Festival and the St. Louis International Film Fest, not to mention the Hollywood productions that have shot here, from White Palace to Escape from New York. But there's always room on the calendar for another film festival — Franki Cambeletta just didn't expect he'd be involved in the newest entry.

The director of the new Benton Park Film Fest credits Dick Pointer, the owner of Lemp Mansion and Lamp Grand Hall, for both the idea and the venue. It wasn't a completely out-of-the-blue suggestion. Not only is Pointer a filmmaker, but Cambeletta is one himself (with his partners John Bolduan and Jeremy King, he owns the production company Shift Films, with Ryan Foizey as a creative partner). When Pointer suggested it, Cambeletta quickly agreed, and a new festival was born.

Four screening rooms will be organized thematically. Hall one is for features and shorts, hall two screens the feature documentaries and student documentaries (on Saturday only). Hall three is the founders hall, screening films by Cambeletta and Pointer, and experimental films, musical shorts and animation entries will be in hall four. Food and drink will be sold on site as well, so you can maximize your film watching.

"We wanted the Benton Park Film Fest to be approachable for beginning and intermediate filmmakers," promises Cambeletta. "If you're an actor, or a musician or a writer or a would-be filmmaker, come meet some people and make some connections."

4. Falls Down Funny
The small town of Popcorn Falls is in trouble. Its namesake waterfall has run dry, and a big corporation is about to move in and build a sewage plant that will wipe the town off the map. Mayor Trundle and Joe, a janitor, seek a way to save their home. There's a grant available that could keep Popcorn Falls going, but the money has to be used in part to present a play. The town has no theater, no actors and only a week to get a production ready to go. Can they pull it off? James Hindman's comedy Popcorn Falls calls for two actors to perform 21 different characters to tell the story of a town in a race against time. Midnight Company presents Popcorn Falls at 8 p.m. Thursday through Saturday at the Kranzberg Arts Center (501 North Grand Boulevard; www.midnightcompany.com). Tickets are $20.

5. A Letter from Daddy
Jerusha Abbott has the unfortunate distinction of being the oldest orphan in the John Grier Home, but finally catches a break when a mysterious benefactor, "Mr. Smith," offers to send her to college, all expenses paid. The only catch is that Jerusha must send a monthly letter to Mr. Smith detailing her progress. Four years of regular letters document Jerusha's maturation, her friends and her dreams, all of which warm Mr. Smith's heart to his charge and make him consider the nature of his charity. But Mr. Smith has a secret, and Paul Gordon and John Caird's musical Daddy Long Legs tells the story of two lonely people who unexpectedly discover how alike they are despite vastly different circumstances. Insight Theatre Company opens its new season with Daddy Long Legs at 8 p.m. Thursday through Saturday and at 2 p.m. Sunday (March 28 to April 14) at the Marcelle Theater (3310 Samuel Shepard Drive; www.insighttheatrecompany.com). Tickets are $20 to $40.

6. Sooner or Lager
In the craft beer world there's a tendency to experiment with styles and flavors, which can spiral into some strange territory (Gooey Butter Cake Beer, anyone?). In the race for something new and noteworthy, the humble lager gets overlooked. Urban Chestnut Brewery once again shines the spotlight on the crisp and sturdy beer that built St. Louis with its Lager Summit. A host of craft breweries, from Daredevil to the Austin Biergarten Brewing Co., have brewed old and new lagers for the event, which also includes seminars on everything from the lagering caves of St. Louis to the history of lagers in America. The second annual lager summit takes place from 11 a.m. to 4 p.m. Sunday, March 31, at Urban Chestnut's Grove Brewery & Bierhall (4465 Manchester Avenue; ww.urbanchestnut.com). Tickets are $25 to $32 and include a commemorative sampling glass and unlimited samples, plus admission to all conference talks.

7. Cinematicats
Al Gore gets all the credit for inventing the internet, but it was cats who made the internet the unstoppable juggernaut that it is today. There isn't a video-sharing site online that isn't blessed with clips of cats misjudging the distance of their jumps, cruising around on their Roombas and terrorizing much larger dogs — the art form is the lifeblood of the internet. For the second annual Cat Clips screening, a curated selection of user-submitted precious cat footage will be screened live from 6 to 8:30 p.m. Tuesday, April 2, at Urban Chestnut's Grove Brewery & Bierhall (4465 Manchester Avenue; ww.stlcats.org). Snacks are free and there will be a photobooth, raffle baskets and cash prizes for the top two clips. Tickets are $20 to $40, and the money benefits Animal House Cat Rescue.