How a Tennessee Williams Play Set in St. Louis Inspired The Golden Girls 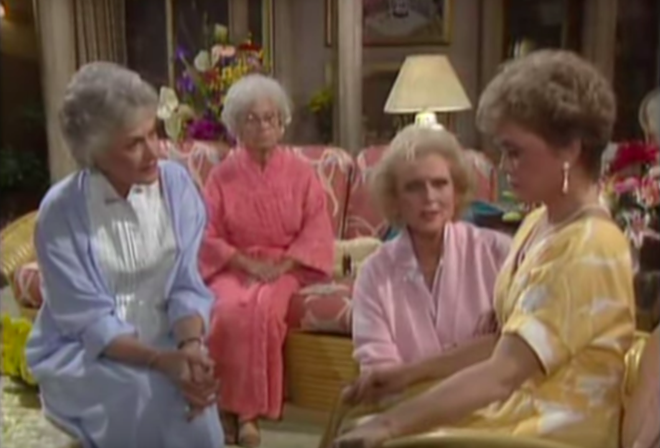 Tennessee Williams' plays have been credited many innovations, from that meme-worthy "Stelllllaa!!!" to the lyrical cannibalism in Suddenly Last Summer. But did a play Williams wrote about St. Louis actually inspire The Golden Girls?

"I've been to many Tennessee Williams seminars and panels, and that is what the scholars contend," says Carrie Houk, the founder and artistic director of the Tennessee Williams Festival St. Louis. With the unspoken acknowledgement that such evidence is far from definitive, Houk continues, "But if Golden Girls was based on the play, it's very loosely based."

The 1979 play, which Houk tapped for this year's festival, is called "A Lovely Sunday for Creve Coeur," and its Depression-era setting is inspired by Williams' early life in St. Louis. In it four women who live in the same building dream of romance, family and escaping their dreary situation, but will settle for a nice Sunday afternoon in Creve Coeur Park.

The accepted show biz story for the creation of the Golden Girls is that NBC president Brandon Tartikoff wanted a show for an older audience. Golden Girls' creator Susan Harris was inspired by her very active grandmother's social life. (Harris also created the soap opera parody Soap, which focused on two sisters — one practical, one wealthy and moderately delusional about her own life — who regularly sat around the kitchen table discussing their new problems every week.)

Still, references to Williams' plays run through many of Golden Girls' 177 episodes, from the names of the main characters to Blanche Deveraux's mannerisms and her father, whom she calls "Big Daddy," echoing the name of the patriarch in Cat on a Hot Tin Roof. And Rue McClanahan said her portrayal of Blanche was directly inspired by Williams' famous heroine in A Streetcar Named Desire. (Worth noting: Williams himself praised McClanahan's early performance in the play Dylan as being a "rare combination of earthiness and lapidary polish, that quality being utterly common and utterly noble." If you're looking for a summation of the prototypical Williams heroine, that's it.)

For Houk, the magic of "A Lovely Sunday for Creve Coeur" is not any real or perceived connection to a beloved sitcom, but the play itself. "It's about loneliness and the need for human connections," she explains. "It's a comedy, but it has a lot of vulnerability. It could just be wisecrack, wisecrack, wisecrack, but there's this other element, of the characters needing love. All four women are different, but they need each other."

Like many of Williams' short plays, the condensed nature of the one-act format heightens the impact of his poetic flourishes, and also allows him the luxury of a happy ending. "Here are these women on a flat on Enright Avenue, and they dream about flying away," marvels Houk. "Even if there's just one afternoon at Creve Coeur Park, there's a respite."

"A Lovely Sunday for Creve Coeur" will be directed by Kari Ely, and star Maggie Wininger, Kelley Weber, Julie Layton and Ellie Schwetye, which experienced theater goers will recognize as quite a potent line-up. It will be performed May 11 to 19 in the Grand Hall at the Grandel.

For tickets and information on the rest of the festival, visit www.twstl.org, and don't forget to have a piece of cheesecake before bed.