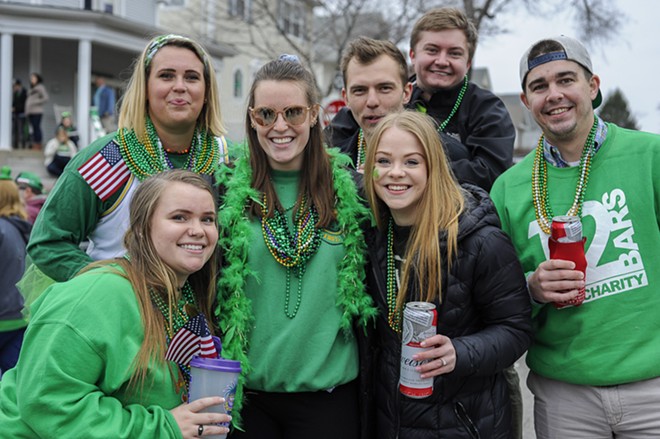 The St. Patrick's Day parade will return once again to the streets of Dogtown on March 17 and, for the second year in a row, will feature an early start time.

One year ago, the Dogtown parade began at 10 a.m. after it fell on the same day as the downtown parade (historically held on the Saturday before the holiday). This year, March 17 is a Sunday, so the two events are on different days. The Dogtown parade will still make an effort to stay family friendly with an 11 a.m. start time.

The reason? Last year’s parade went so smoothly, says organizer Jim Mohan of the Ancient Order of Hibernians. Over the years, Mohan has seen many adults return to the parade after decades of attending as children. Organizers want that same experience to continue and hope that moving the parade up from the traditional 12:30 p.m. beginning will provide a more inclusive (read: not quite so alcohol-fueled) space.

Last year, organizers not only succeeded in making the event more family-oriented, but community-oriented as well. For the first time ever, the Hibernians joined forces with the community-based organization Dogtown United to put on the Dogtown Irish Festival. Following the conclusion of the parade, the streets opened up for the festival, providing a large space for attendees to convene and celebrate. The festival will return in a similar format this year.

Organizers don’t want to eliminate the fun of St. Patrick’s Day with an early start time, Mohan stresses. “We’re not trying to be killjoys, but as Hibernians but we want to emphasize the Hibernian nature of the parade,” he says.

Instead, Mohan hopes that the earlier start time can provide a space for everyone to get something out of the event. Food, drinks and t-shirts from Dogtown-based businesses will follow the parade, along with live music.

“We wanted to bring the neighborhood more into this,” Mohan says. “We wanted them to feel like this was their event too.”

The parade will feature members of the St. Louis Irish community and more than 100 floats. The festival will run until 6 p.m., with local businesses closing at 8 p.m. Organizers also improved the accessibility for those with disabilities, including sign language interpreters and specialized viewing sections in the day’s events.

Although Mohan wants people to enjoy themselves, he wants them to be mindful of the history attached to the event and Dogtown.