Mardi Gras 2019: A Complete Guide to the St. Louis Fun

In St. Louis, Mardi Gras isn't just about Fat Tuesday. It's also the Friday before Fat Tuesday (when the mayor's ball is the hottest ticket in town) and, of course, Saturday, when throngs of revelers fill Soulard with excitement, beads and beer.

We've got the complete guide to this year's festivities, in Soulard and out of it. And here's a new flash for this year: If you want to celebrate on Tuesday itself, the Central West End now has a party for that.

Here are the highlights.

Bud Light Grand Parade
The 40th annual Mardi Gras parade kicks off at 11 a.m. Saturday at Busch Stadium. This year’s theme is “40 Years of Magic, Music and Memories,” and the parade celebrates the St. Louis institution with krewes riding nearly 100 floats. The parade ends at Anheuser-Busch Brewery, and then Soulard is open for business until the wee hours. Free. Sat., March 2, 11 a.m., stlmardigras.org/events/bud-light-grand-parade.

Al Rubin Memorial Crawfish Boil
If you want to avoid the Soulard crowd but still celebrate this Saturday, Narwhal’s will be open all day, serving up its signature slushies along with three Mardi Gras-inspired frozen cocktails: Elderflower Gin Fizz, Hurricane Tony and Black Cherry Sazerac. From noon to 5 p.m. (or until sold out) enjoy a crawfish boil courtesy of Cajun Boil Company. One-pound plates are $20; get an additional pound for $15. Sat., March 2, 7 p.m. to midnight, 314-696-8388. Narwhal’s Crafted Urban Ice, 3906 Laclede Avenue.

Blues Alumni Party Tent
If you want to rub elbows with Blues legends at St. Louis’ biggest party, the Blues Alumni Party Tent is what you’re looking for. Your all-inclusive pass lets you hang out with some of the best to don the Blue Note in a climate-controlled tent right on the parade route at Seventh and Ann streets. Enjoy an open bar with beer and cocktails, NSFW story time with the Blues players, a lunch buffet from Joanie’s to Go and an air-bubble hockey tournament. Sat., March 2, 9 a.m. to 5 p.m., $125, stlmardigras.org/events/blues-alumni-experience. 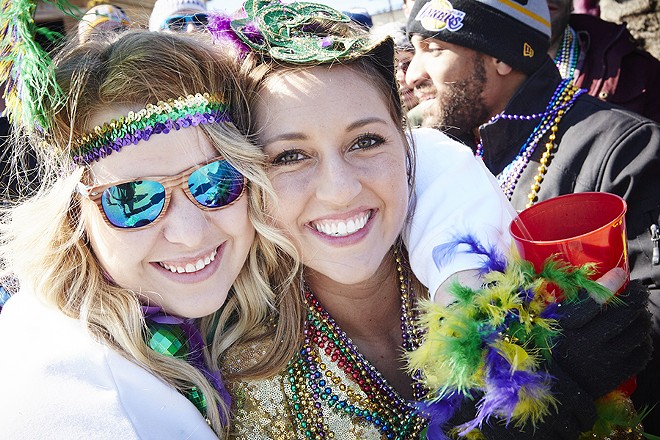