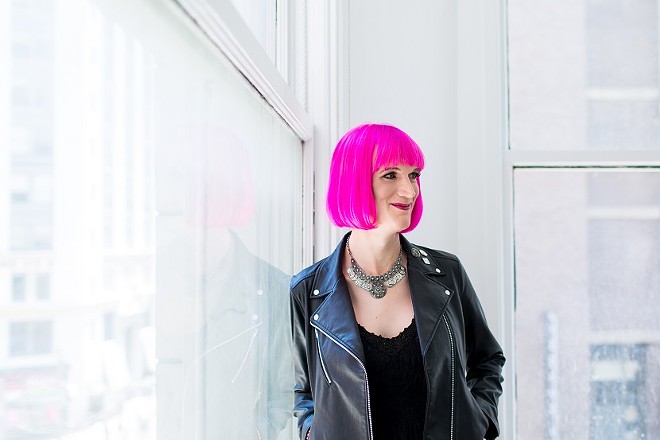 Friday's here at last, and you have the next two days free. What will you do? Enjoy a late Valentine's Day nightmare, take in the ballet or perhaps revel in a deluxe performance of one of the greatest ever film scores? Just keep an eye on the weather before you leave the house — February can be wild.

1. Mom Says Hi
What better way to celebrate Valentine's Day than with a film about the purest love of all, that of a son for his mother? Norman and his mom run a motel with a decidedly unique ambiance. When pretty young Marion Crane stops in for a short stay, Norman's life gets very interesting indeed. Alfred Hitchcock's shocking thriller Psycho is known even by those who have never seen it. The Webster Film Series presents the classic back on the big screen where it belongs, with that fantastically evocative Bernard Herrmann score doing its damnedest to make you sweat. Psycho screens at 7:30 p.m. Thursday, February 14, at Webster University's Moore Auditorium (470 East Lockwood Avenue; www.webster.edu/film-series). Tickets are $5 to $7.

2. A Gem of a Show
George Balanchine's Jewels is a three-act ballet that uses music from three different composers, which is unusual in its own right. That the ballet has no plot and that all three acts are independent of each other is even more astonishing. "Rubies," the middle act, sets Balanchine's ebullient choreography against Igor Stravinsky's joyous, bouncy "Capriccio for Piano and Orchestra." The dancers, clad in rich red tones, represent the dance of light on gemstones, refracting and bouncing across the stage. The Saint Louis Ballet presents its first-ever performance of "Rubies" as a special Valentine's Day treat. Performances are at 8 p.m. Friday and Saturday (February 15 and 16) at the Touhill Performing Arts Center on the University of Missouri-St. Louis campus (1 University Drive at Natural Bridge Road; www.touhill.org). Tickets are $34 to $59.

3. Ice Fight
Sergei Prokofiev composed music for every format you can think of. Operas, symphonies, ballets, concertos and solo piano pieces, he did it all. So far-ranging were his interests that he even branched out into film scoring, teaming up with fellow Russian genius Sergei Eisenstein for the latter's epic film Alexander Nevsky. The movie chronicles the national legend who saved the motherland from a horde of invading Teutonic Knights of the Holy Roman Empire; the highlight is a terrifying battle fought on a frozen lake. Prokofiev's score is so good that he condensed some of the most thrilling moments into a 40-minute long cantata, which includes the music for the climactic Battle on the Ice. Conductor Stéphane Denève leads the St. Louis Symphony through a program of Prokofiev's greatest hits, including his Piano Concerto No. 2, the Alexander Nevsky cantata and Denève's own suite arranged from Prokofiev's ballet Cinderella. Performances are at 8 p.m. Friday and Saturday (February 15 and 16) at Powell Hall (718 North Grand Boulevard; www.slso.org), and tickets are $25 to $83.

4. Don't Dream It
The Rocky Horror Picture Show is a film that needs no introduction, but just in case you're new to the country ... Brad and Janet are a couple of squares who get lost, find a castle and discover the wonders of alternative lifestyles thanks to over-sexed scientist Dr. Frank N. Furter and his gang of hangers-on and party guests. The only things standing in the way of an all-out lovefest are the creepy butler and maid, Riff Raff and Magenta. The cult-classic musical experience is best experienced at a midnight showing with a large crowd of cult members, so get thee to the Moolah Theatre (3821 Lindell Boulevard; www.stlouiscinemas.com/moolah) at 11:55 p.m. Friday and Saturday (February 15 to 16) for the majesty that is the Rocky Horror Picture Show. Flustered Mustard will do the honors as the live shadow cast acting out the film in front of the screen, and $3 prop bags that include the essentials (balloon, newspaper, latex glove, toilet paper) will be sold at the door. Tickets are $8.

5. Scream for More
Nothing makes your date hold tighter to you than a good scare, so if you want to get physical, why not get frightened this Valentine's Day? Legendary haunted house the Darkness (1525 South Eighth Street; www.scarefest.com) is open for business from 7 to 10 p.m. Saturday, February 16, for a Bloody Valentines special event. Buddy, you're gonna see some hearts (and other innards) as you make your way through the goriest date night ever, with scares and close calls a-plenty. Your date will leave fingerprints embedded in your arm after this romantic getaway. Tickets are $25 and limited in number, so reserve now.

6. Sweet Sixteen
Annie Desmond is turning sixteen, and she and her friends plan to celebrate in a big way — tattoos may be involved. They're like many black teenagers, dreaming big but surrounded by little that offers hope of something better. Annie's mother works herself near to death to support them, but when Annie's friend Margie tells the group she's pregnant, they hatch a plan that's shortsighted at best. Kirsten Greenidge's play Milk Like Sugar has been praised for the poetry and honesty of its dialogue and its unflinching look at the future being created for black youth. The Black Rep presents Milk Like Sugar at 7 p.m. Wednesday and Thursday, 8 p.m. Friday and Saturday and 3 p.m. Sunday at Washington University's Hotchner Studio Theatre inside the Edison Center (6445 Forsyth Boulevard; www.theblackrep.org). Tickets are $15 to $40.

7. Night Life
Charlie Jane Anders won the Nebula award for her novel All the Birds in the Sky, and similar buzz surrounds her new novel, The City in the Middle of the Night. Sophie is presumed dead after being exiled onto the beast-haunted ice that covers the side of the planet that knows only freezing darkness. The other hemisphere exists in eternal sunshine, but its cities are equally dangerous. The beasts around Sophie aren't mindless, however, and she forms a psychic bond that allows her to communicate with and understand one of them. The City in the Middle of the Night is a book about culture, empathy and other big ideas that has drawn comparisons to the best of Ursula K. LeGuin. The San Francisco-based Anders comes to St. Louis to discuss and sign her novel at 7 p.m. Monday, February 18, at Mad Art Gallery (2727 South Twelfth Street; www.left-bank.com) as the guest of Left Bank Books. Admission is free, and Anders' books will be sold on site.