As Blues' Pride Night Becomes 'Hockey Is For Everyone' Night, LGBTQ Fans Fume 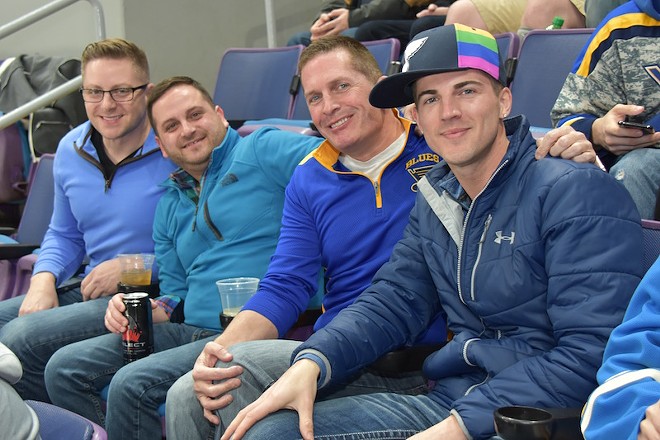 When the St. Louis Blues started hosting Pride Night in 2017, they went all out. Drag queens roamed the concourses for charity. Fans got, and promptly donned, T-shirts. Prominent members of the community were chosen to drop the first puck — in 2017, it was the first gay Miss Missouri, followed in 2018 by prep football standout Jake Bain. And the rainbow lighting was divine. "It was like a Skittle factory exploded inside that place," says Colin Murphy, editor in chief of Boom Magazine, which covers the LGBTQ community here.

Fast-forward to the game Tuesday, and while the team notched yet another victory on the ice, LGBTQ fans in the stands were left feeling distinctly underwhelmed.

Gone were the drag queens, the celebrity puck drop, the gear that made gay and lesbian fans instantly recognizable and feeling honored. Instead of T-shirts, or the hats given out in 2018, people with theme tickets were given backpacks — and those were handed out inside plain white bags. Photographers for Murphy's magazine, who'd presumed they'd have no trouble getting shots of the rainbow-colored fun, found themselves stymied.

"We couldn't even do our jobs," Murphy says. "You try to identify LGBTQ people if they're not wearing a special shirt!"

For members of the community there not just for work, but for fun, the night also left a sour taste. Marty Zuniga, vice president of St. Louis Pride, says his group ended up leaving in the second period.

"We felt like we'd been sold a bill of goods that this was our night," he says.

Reached for comment, the Blues initially suggested LGBTQ fans were wrong to think they ever had exclusive ownership of the festivities. Despite the hoopla devoted to the Pride theme in its two previous iterations, Blues spokesman Dan O'Neill suggests Tuesday wasn't meant to be Pride Night at all — but rather an "all-inclusive" night called "Hockey Is for Everyone."

The goal for the league-wide initiative, O'Neill says, "is to communicate that hockey is an all-inclusive sport for fans, players and staff. We made every effort to recognize as many communities as possible, including the LGBTQ community."

So does that mean no more Pride Night? O'Neill doesn't address that directly, stating only, "Hockey Is For Everyone was an all-inclusive night." While the team gave out the Pride backpack, he says, "We also represented the LGBTQ community, blind hockey players, special needs hockey players, sled hockey players etc. Our goal was to make everyone feel welcome and appreciated."

In that, some fans say, the team failed. They credit the Blues for hosting a Pride Night before the Cardinals were willing to do so. But now, they say, it's the Cardinals who seem to be doing it right, while the Blues marketing felt like a bait-and-switch.

And to suggest the evening was never actually Pride Night felt to some like gaslighting. The game had been listed as Pride Night on the Blues' website, Zuniga says — although references to that were scrubbed just two days before the game. The Blues made no effort to explain that plans had changed, or how the evening was being folded into other efforts to support diversity.

"You took our money and did not show support to the community," Zuniga says. "If you're going to change things, come to us first. Don't just say you're going to do it again, and then we show up and there's nothing."

Zuniga, for one, won't be back. Of his group's early departure Tuesday, he says, "It was a great game, but we're over it."