The Best Things to Do in St. Louis This Week, February 7 to 12 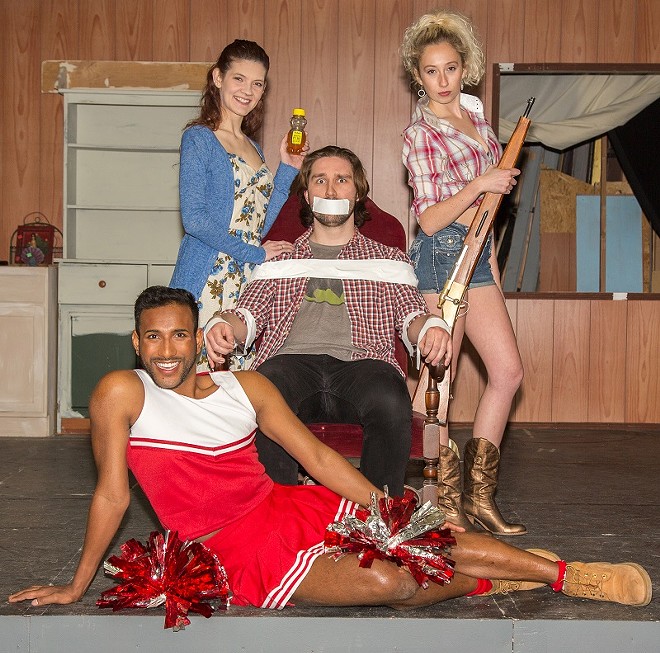 This weekend is a big one for theater, with a number of high-power plays hitting the stage across the city. But that's not all! The St. Louis Symphony gives us a touch of Mozart, and romance returns to the movies for a limited time.

1. The Fires of Hell
All of Salem is whispering about what happened in the forest last night. There are rumors that Rev. Parris' daughter Betty was caught dancing naked in the woods with several other girls — which can only mean witchcraft. Now renowned witchcraft expert Rev. John Hale is on his way to town to get to the bottom of matters. It's a long way to the bottom, and before Hale and Parris can find it, dozens of villagers will be accused of witchcraft by the young women and hanged for their crimes. How can Salem, perched on the raw edge of the new world, survive the loss of so many people? Arthur Miller's searing drama The Crucible was inspired by the insanity and paranoia of McCarthy-era America and depicts a society devouring itself in pursuit of an invisible enemy. Stray Dog Theatre presents The Crucible at 8 p.m. Thursday to Saturday (February 7 to 23) at the Tower Grove Abbey (2336 Tennessee Avenue; www.straydogtheatre.org). Tickets are $25 to $30.

2. The Only Way Isn't Up
Stephen is an up-and-coming press secretary for a surprising presidential candidate. Or maybe that's just Stephen's spin in action. He's constantly spinning something, whether in a "candid" interview with a New York Times reporter or while regaling a backroom audience with stunning tales of his political acumen. He's young and handsome, and with his candidate's impending move to the Oval Office, there's no height he can't metaphorically scale. Of course the higher you rise, the harder the fall. House of Cards creator Beau Willimon wrote his politics 'n' power drama Farragut North after years of working on other people's campaigns, most notably Howard Dean's failed presidential run in 2004. St. Louis Actors Studio presents Farragut North at 8 p.m. Thursday through Saturday and 3 p.m. Sunday (February 8 to 24) at the Gaslight Theater (358 North Boyle Avenue; www.stlas.org). Tickets are $30 to $35.

3. Mid-Morning Night Music
Stéphane Denève, the St. Louis Symphony's music director designate, is in town to bring a little passion and beauty to Powell Hall in the run-up to Valentine's Day. This weekend is Stéphane's Serenade, a program that features Mozart's beloved Eine Kleine Nachtmusik, Brahms' striking Symphony No. 2 and a double bill of Vaughan Williams' gorgeous works for violin in The Lark Ascending and Serenade to Music. Mozart's piece is often used as musical shorthand in films for a rich person's party, but only when you hear the entire composition can you truly appreciate the beauty of it. Williams' The Lark Ascending is less used in popular culture simply because it's impossible to excerpt its ethereal melody; it's all or nothing with this pastoral gem. Performances are at 10:30 a.m. Friday, 8 p.m. Saturday and 3 p.m. Sunday (February 8 to 10) at Powell Hall (718 North Grand Boulevard; www.slso). Tickets are $25 to $88

4. Bear Necessity
Nan's life in the woods of North Georgia isn't easy. Dominated and abused by her husband Kyle, she's eager to break free from him and live her own life. Now she has a plan to do just that, but first she wants to extract some justice from the lout. Once she has Kyle securely duct-taped to his recliner, she enlists her gay friend Simon to be her emotional cheerleader and Sweetheart, a local stripper who wants to break into acting, to recreate some of the worst moments of her marriage. And after Nan has shown Kyle the error of his ways, she doesn't plan to leave anything behind. With some luck and enough raw meat as bait, the local bear population should take care of any loose ends, like her husband. Lauren Gunderson's Exit, Pursued by a Bear is a dark comedy about a woman empowering herself by any means necessary. The West End Players Guild performs the show at 8 p.m. Thursday through Saturday and at 2 p.m. Sunday (February 8 to 17) at the Union Avenue Christian Church (733 North Union Boulevard; www.westendplayers.org). Tickets are $20 to $25.

4. Norway But Forward
Back in the days before Twitter, diplomacy was a face-to-face business. Representatives from two nations or groups would meet together to discuss the issue at hand like adults and try to come to some sort of agreeable compromise. In the early 1990s, these quaint methods enabled leaders of the Palestine Liberation Organization and Israeli government to meet, however reluctantly. Norwegian diplomat Mona Juul and her husband Terje Rød-Larsen used back-channel relationships to very quietly establish connections with Israeli Prime Minister Yitzahk Rabin and PLO Chairman Yasser Arafat, and encouraged them to sit down and talk about building a road to peace. In a room supplied with food and drink, the leaders of two warring parties engaged with one another as people and found the spark of a human connection. J.T. Rogers' Tony Award-winning play Oslo dramatizes those meetings and that fleeting moment when two enemies shook hands and agreed to make peace. The Repertory Theatre St. Louis presents Oslo Tuesday through Sunday (February 8 to March 3) at the Loretto-Hilton Center (130 Edgar Road; www.repstl.org). Tickets are $19 to $92.

5. En Fuego!
Fire can be a force for destruction or creation, depending on how it's used. At Laumeier Sculpture Park's Fire and Light, fire is absolutely a creative force. The park will be open from 4 to 9 p.m. Saturday, February 9, for an evening of artist demonstrations heavy on the hot stuff. Blacksmith Andrew Andrasko will show how fire transforms iron into art, and Six Mile Sculpture Works will light up the night by pouring 2,000 pounds of molten iron into custom scratch-block molds made during Laumeier workshops. There will be fire pits, and Seoul Taco, Sia's Italian Ice and the StLouisanaQ food trucks will be open for business. Laumeier is located at 12580 Rott Road in Sunset Hills (www.laumeiersculpturepark.org), and admission to Fire and Light is free. Bring a flashlight for easy walking. If you don't have one they'll be sold in the gallery gift shop.

6. Old-Fashioned Romance
Before Titanic ushered the young women of the late 1990s into the world of romantic love, Dirty Dancing served that same role for an earlier generation. The 1987 film stars Jennifer Grey as Frances "Baby" Houseman, a seventeen-year-old spending summer in the Catskills in 1963. Music and culture are changing, but for the sheltered Baby, everything at Kellerman's summer resort is new. Most new and startling of all is the world she discovers after hours, when the resort staff socialize (and more) at their secret "dirty dancing" parties. Handsome dance instructor Johnny Castle (Patrick Swayze) catches Baby's eye, and they begin a dance partnership that becomes much more than that. The classic movie is back on big screens for an extremely limited run. Romantics young and not so young can see it locally at 7 p.m. Sunday and Wednesday (February 10 and 13) at the Marcus Wehrenberg Ronnies 20 Cine (5320 South Lindbergh Boulevard; www.fathomevents.com). Tickets are $12.50.

7. New Look Blues?
The NHL's trade-deadline day is February 25, which means the St. Louis Blues could look different by next week, or even by the time you read this. Brayden Schenn, Colton Parayko and Patrick Maroon are all rumored to be on the trade block, depending on which NHL talking head you believe. Can a couple of trades shake the Blues out of this up-and-down (and down some more) season? It's worked before, but never so effectively that the team has romped into the Stanley Cup finals. The team that faces the New Jersey Devils for the Tuesday, February 12, game at Enterprise Center (1401 Clark Avenue; www.stlblues.com) could look very different, or mostly the same. Really, the only thing that needs to change is the Blues' win-loss rate, and everything will work out fine. The puck drops at 7 p.m., and tickets are $24 to $135.