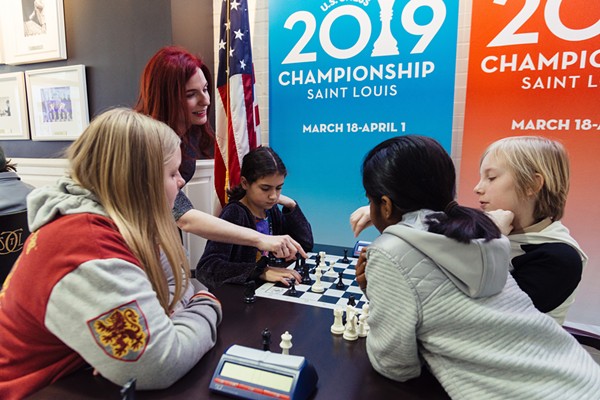 Christmas came early for the world of women's chess in 2018. Not only did the World Chess Federation announce a revised format for the Women's World Championship (so long, 64-player knockout tournament), it also more than doubled the prize money to $550,000, bringing the purse more in line with the Men's World Championship along with the format. Both changes were made with the express purpose of further developing women's chess.

Not long afterward, the Saint Louis Chess Club announced the inaugural Cairns Cup, a tournament for elite female players. Currently underway in the Central West End, the Cairns Cup pits the top ten women players against each other in a round-robin format, with a prize fund of $150,000. That's one of the largest pots available in a women's competition.

In a press release, Dr. Sinquefield says she hopes the tournament will "inspire more women to play chess on a competitive level." Sinquefield is a co-founder of the chess club here; the tournament takes its name from her maiden name.

Why the push for more women in chess? The gender is underrepresented in the game — and its proponents would tell you that's a very bad thing. As Jennifer Shahade, a Saint Louis Chess Club board member and Women's Grand Master, explains, "I think the benefits of chess are more relevant for women and girls. Chess teaches the ability to block out distractions and what people think about you. It's an important skill."

There are people who immediately question why separate tournaments are necessary. Chess is a mental game, this isn't football, etcetera. "The men-versus-women framework hurts us sometimes, because it hurts the attempts for diversity," Shahade counters. "It's hard to push through initiatives like equitable prize purses if people think there are no need for them."

The truth is that chess has a social component, and that while a substantial number of girls start playing between kindergarten and third grade, their numbers decrease as they age and become outnumbered by boys at tournaments and clubs. The more girls who continue playing, the more talented women will emerge from the junior ranks. 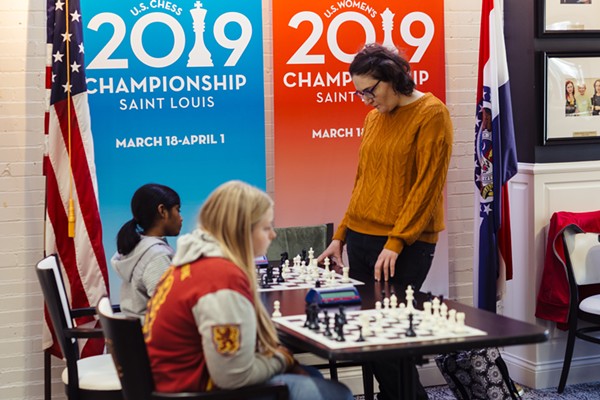 The field for the Cairns Cup features Anna Zatonskih and Irina Krush (both winner of multiple U.S. women's championships), former Women's Blitz World Champion Nana Dzagnidze and former Women's World Champion Alexandra Kosteniuk. The prize for first place is $40,000, and Shahade believes any of the ten could take it.

The players are just as cagey about their chances.

"When we interviewed the players, every competitor said 'Valentina Gunina could win 'em all or lose 'em all,'" Shahade says, referring to the Russian Grandmaster who won the 2016 London Chess Classic Super Rapidplay with one of the finest performances ever by a female player. Shahade slyly notes that St. Louis has a reputation for witnessing surprising play. "When we started the Sinquefield Cup, Fabiano Caruana won the first seven games and nobody saw it coming." (Caruana is currently ranked No. 2 in the world.) "History is made in St. Louis," she says.

As for the future, Shahade takes the long view — and that makes her hopeful.

"Thousands of years ago the queen was the weakest player, only allowed to move one square at time," she notes. About 500 years ago the rules changed and the queen took her current form as the most powerful piece, able to move any number of squares in any direction. Perhaps coincidentally, Isabella I of Spain and Eleanor of Aquitaine rose to world power concurrently with the chess queen's ascension.

It ain't easy for women to get ahead in the world, though. "When the queen became powerful, it was called the 'mad women's chess,' which mirrors the sort of negativity that surrounds modern women," Shahade says. The pejorative fell by the wayside, because the new queen shortened playing times to a few hours, which helped popularize the game. Ladies get stuff done, to paraphrase Tina Fey.

For the deskbound, matches will be streamed live daily with commentary by Shahade, GM Yasser Seirawan and GM Maurice Ashley via uschesschamps.com. A Russian language broadcast with IM Almira Skripchenko and WGM Anastasiya Karlovich is also available.