Britt Tate Beaugard has learned a few things in her three years teaching art in the St. Louis Public Schools. One is that it's OK to mix things up — preferable, really, which is one reason she has a classroom rabbit named Bunilla Ice. Another? The subject matter has to reach the students where they are.

"I'm not teaching Da Vinci," she says. "That's not relevant to kids in north St. Louis. They're tired of learning about the history of old white people. And I'm also really interested in showing them art in the world. If they want to make change in the College Hill neighborhood, they can do it through art."

For Tate Beaugard's fourth graders at Bryan Hill Elementary School, those ideas found their nexus this winter with an art project inspired by Kehinde Wiley. The New York City-based artist, who famously painted Barack Obama's presidential portrait, has the city buzzing over an exhibit at the Saint Louis Art Museum that depicts everyday African-American St. Louisans in poses inspired by the museum's collection.

Wiley has a background not unlike the kids at Bryan Hill, which is located in one of the toughest neighborhoods in a famously tough city. (Notes Tate Beaugard of north city's College Hill area, "We can't even get food delivered here.") Growing up in South Central Los Angeles, Wiley notes in his artist bio that he saw "violence, anti-social behavior, streets on fire." If he could use art to underscore the heroism in today's St. Louis residents, Tate Beaugard thought, why couldn't her fourth graders do the same?

And so the class learned about Wiley's life story. They played a matching game, pairing his portraits with the older works that inspired them. Then they chose a painting from an Old Master or the baroque period to imitate — and struck a pose of their own in front of a "green screen" Tate Beaugard made out of butcher paper.

And then, in what many of the students say was the most laborious part of the process, they colored vivid backgrounds, using the pages of adult coloring books to provide the framework.

Thanks to exacting work with an iPad Pro and an Apple pencil and the new large-scale printer purchased by the school's principal, the result is a gorgeous series of photo-based portraits, clearly inspired by Wiley's work and yet also showing each member of the class in his or her idiosyncratic glory.

Two girls stand side-by-side, staring out from a geometric background. A boy in a Nike sweatshirt faces the camera as he stands amidst a wavy sea, his expression enigmatic. Two other girls crouch and beam in a pose right out of Wiley's museum show.

In each case, they are entirely themselves, but also transformed. Wiley famously paints his subjects in their own clothes; the poses may be formal, but their garb is their own. While Tate Beaugard's kids had to wear their school uniforms, they found personal expression in the hoodies their teacher permitted them to wear on top. And even in their white, blue or khaki basics, in this construct, both their personalities and a certain pride of self shine through.

As you might expect from ten-year-olds, the kids are a bit shy when asked about the various steps in the project. But one jumps in to say how excited he was when, midway through the multi-week project, he spotted Wiley's work being advertised on a bus stop. "I asked Mrs. Hamilton, would it be good to tell Miss Tate about it?" he recalls.

"It was," interjects their home room teacher, Bertha Hamilton. And yes, Tate Beaugard agrees, it certainly was.

Then Jayshyne Cotton volunteers that, when he took his artwork home at the end of the project, his mother knew just what to do with it.

"She put it in a frame," he says. At that point, the previously quiet class comes to life — at least two-thirds of their parents, as it turns out, did the same thing. 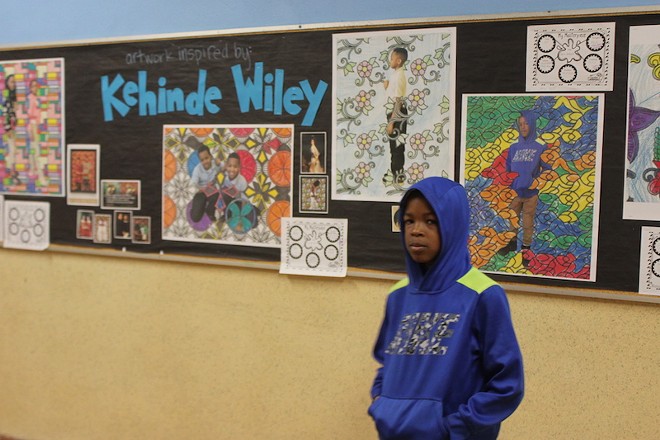 It's not just the halls of their own homes where the portraits are now enshrined. After Tate Beaugard laminated them, she hung them in the hallways of the school, turning the kids into minor celebrities. Asked where their portraits are hanging, each student knows the precise location — and points to it proudly.

As for their homeroom teacher, she's been inspired to make one of her own. "I want to do one and give it to my husband on Valentine's Day," Hamilton says, and holds up a brightly colored background. "I spent the weekend coloring mine!"

On February 5, thanks to a grant from the St. Louis Public Schools Foundation, the kids at Bryan Hill will be taking a trip to the Saint Louis Art Museum, along with Tate Beaugard's fifth-graders from Columbia Elementary, who undertook the same Wiley-inspired project.

"This is a very big deal for my kids," says Tate Beaugard.

It's not just that they'll finally be seeing people who look like them hanging on the walls of the city's most prestigious museum. It's that they'll also be seeing art that looks a whole lot like theirs. 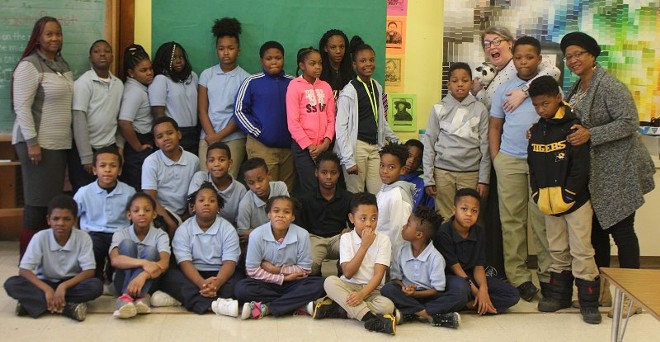