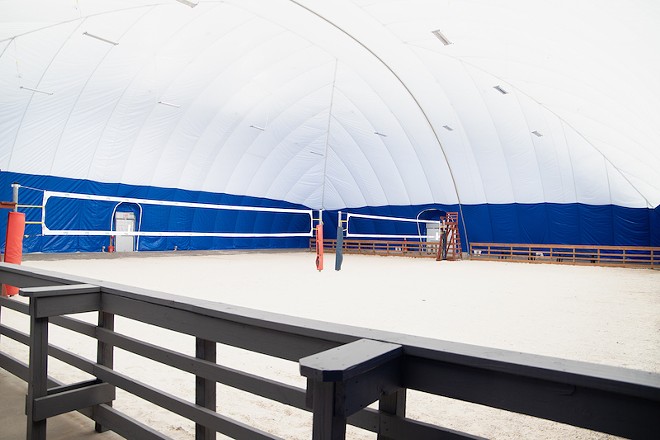 If you're trying to stay active even during the coldest winter months, you might want to check out the action in Bridgeton. There, a combination bowling alley/pizzeria has just opened the St. Louis area's first air-supported dome in twenty years — and it's turning the northwest county 'burb into a beach volleyball mecca.

And if you're wondering what beach volleyball has to do with bowling, well, it just kind of evolved. Eleven years ago, veteran St. Louis restaurateur Gary Shenberg purchased an old-school bowling alley named Kingpin Lanes (12249 Natural Bridge Road, Bridgeton; 314-291-3215). He liked the business, but rapidly came to realize one thing: "Bowling is not what it was 30 years ago."

Never one to give up, Shenberg looked for ways to drive customers to the alley — and for new revenue streams in the summer months, when no one feels like being cooped up in a bowling alley. That meant opening Brickhouse Pizza Company on site, and then, eight years ago, adding outdoor sand volleyball courts.

But as sand volleyball increasingly became a big draw, Shenberg started researching ways to expand the season beyond warm-weather months. After seeing a similar model in Kansas City, he landed on the idea of a large air-supported dome to allow play during winter months.

After grappling with construction and a few unanticipated delays, Volleyball Beach 365 dome opened last week for business. Shenberg says it's already a smash hit: In addition to offering leagues three nights a week, he's added one on Sunday, and is now contemplating a second league that day. "We're sold out," he says.

The dome has room for two courts, as well as plenty of room for spectators on each side, with tables and chairs to keep them fed and hydrated. And all that should make Shenberg's investment pencil out quite nicely. Says Shenberg, "The volleyball players drink more than the bowlers do now!"

The dome is seasonal; Shenberg anticipates keeping it up from October through April. At that point, he can put it away for the summer for open-air play and bring it back come fall.

At first, he says, his regular players were a bit skeptical. "A lot of them were like, 'What?'" he recalls. Now they're totally sold.

"We've heard nothing but great things said about it," he says. "People are saying, 'This is awesome! It's unbelievable!'" In that, it's kind of like playing beach volleyball in Missouri in January as the snow flies. Clearly, it's time to believe.