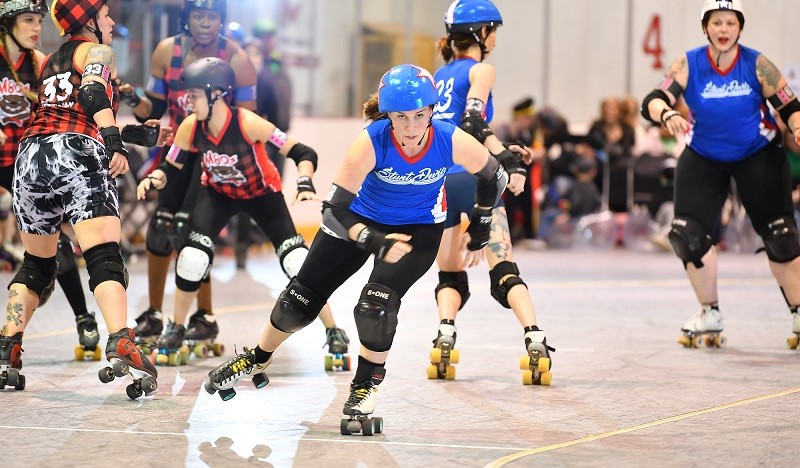 It's another busy weekend in St. Louis, with art shows, a new documentary from Peter Jackson and a whole lotta Christmas options. Let's get out there and holiday so thoroughly that we sleep through Christmas.

1. Who's a Mean One?
Who would want to steal Christmas? Well, if you're an anti-social grouch who hates the happy sounds of singing and good cheer, you'd go to drastic measures for silence. The Grinch is just such a surly character, and with his faithful dog Max he attempts the wholesale theft of a holiday. Dr. Seuss' How the Grinch Stole Christmas! The Musical brings the holiday staple to the stage, with sets and scenery inspired by the book's drawings, and songs borrowed from the TV special. Performances are at 7 p.m. Thursday and Friday, 11 a.m., 3 p.m. and 7 p.m. Saturday, and 1 and 5 p.m. Sunday (December 13 to 16) at the Stifel Theatre (1400 Market Street; www.stifeltheatre.com). Tickets are $32 to $82.

2. Red in Claw
Lauren Marx's fascination with the animal kingdom was fueled by countless childhood trips to the Saint Louis Zoo. This interest in biology led to mythology, particularly the stories in which animals speak and serve as symbols for old gods and primordial power. All of this informs Marx's art, which depicts the natural world refracted through the visual language of legend. (That's her piece, The Struggle of the Apathetic Saint, on this RFT's cover.) Birds and snakes tear each other open while halos of moths swirl around them; ruptured fruits burst forth from open wounds, their seeds spilling forth. Her backgrounds are sparse, only a sinuous branch or a cluster of leaves hanging in a white void. Do these endless battles represent old worlds being destroyed or new worlds being born from flesh and blood, and tooth and claw? Her exhibition Unravel: Paintings by Lauren Marx at Hoffman LaChance Contemporary (2713 Sutton Boulevard, Maplewood; www.hoffmanlachancefineart.com) offers you the opportunity to puzzle it out for yourself. Unravel opens with a free reception from 6 to 10 p.m. Friday, December 14. The show continues through January 5, and the gallery is open from noon to 3 p.m. Friday and Saturday.

3. Tchaikovsky Time
Saint Louis Ballet has long performed Tchaikovsky's The Nutcracker at Christmas, but this year the company goes all out with thirteen performances of the crowd-pleasing classic. In it young Clara receives the gift of a handsome nutcracker, which her brother breaks. When Clara later sneaks downstairs to check on her gift, she discovers an army of attacking mice, led by the Mouse King. Suddenly the nutcracker grows to life-size, and a desperate Clara distracts the Mouse King long enough for her nutcracker prince to defeat the enemy. The duo escape to the Land of Sweets, where much dancing and happy times commence. The Saint Louis Ballet incorporates special effects and grand sets to create a proper holiday spectacle. The Nutcracker is performed Wednesday through Sunday (December 14 to 23) at the Touhill Performing Arts Center on the University of Missouri-St. Louis campus (1 University Drive at Natural Bridge Road; www.stlouisballet.org). Tickets are $35 to $72.

4. Round and Round
The Arch Rival Roller Derby league start its lucky thirteenth season of flat track roller derby with an expanded roster of four home teams and two bouts. The Stunt Devils and the Smashinistas resume their long rivalry at 6:30 p.m. Saturday, December 15, at Queeny Park's Midwest Sport Hockey (570 Weidman Road, Ballwin; www.archrivalrollerderby.com). After the dust settles, the Rebel Skate Alliance dukes it out with the M-80s. If you haven't been to the roller derby in a while (or if this will be your first bout) you should familiarize yourself with the rules, which are on the league website. The short version is that five skaters from each team take to the rink and try to prevent the opposing team's jammer from lapping the pack. If a jammer gets past every opposing skater, they score a point for their team. It's a fast-paced game that requires both physicality — the other team physically blocks the jammer, which results in falls and collisions — and strategy. Tickets are $8 to $15 and kids younger than ten are free.

5. Songs of the Season
There are plentiful musical options during the holiday season, but those in the know always make time for the Gateway Men's Chorus Christmas show. 'Twas the Night is the name of this year's event, and it includes traditional carols as well as contemporary songs such as "Grown Up Christmas List" and "Hanukkah in Santa Monica." 'Twas the Night is performed at 8 p.m. Friday and Saturday (December 14 and 15) at the Union Avenue Christian Church (733 North Union Boulevard; www.gmcstl.org). Tickets are $20 to $25.

6. Unsilent Night
Krampus has lately been on a bit of tear in America. The goat-demon traditionally appears in Central European countries during early December to scare bad children into being good; he's the raging yang to Santa's sober yin. We may have been slow to adopt the beastie, but he's making quick inroads — and he's in St. Louis for one night only. The Darkness (1525 South Eighth Street; www.scarefest.com) opens up for an evening of holiday horror with Krampus' Haunted Christmas from 7 to 10 p.m. Saturday, December 15. Expect Christmas lights, candy, evil elves and a demented Santa Claus, as well as the big, shaggy man-thing himself. Tickets are $25 and going fast.

7. 'Tis the Season
Have you run out of gift ideas for friends and family? Don't worry, the Strange Folk Festival has you covered with its Wundermarket and the Snow Queen's Cottage at Das Bevo (4749 Gravois Avenue; www.strangefolkfestival.com). A heated tent will be set up in the biergarten, selling handmade goods from more than 30 artists from noon to 8 p.m. Saturday and 11 a.m. to 3 p.m. Sunday (December 15 to 23). In addition to the unique shopping opportunity, there will be seasonal sing-a-longs, a visit from Santa and a nearby Christmas tree lot. If you get shopped out early, enjoy Das Bevo's outdoor fire pits and hot chocolate, or head inside for a full meal. Admission is free.

8. A New War Story
It's been exactly 100 years since World War I ended, and the rapid pace of technological advances (both in war and peace) makes it seem to be even further back in time. But technology, as the soldiers of the Great War discovered, is a double-edged sword. Peter Jackson used the latest film restoration processes to create his new documentary about the war, They Shall Not Grow Old. He transformed the grainy, black-and-white contemporary footage not just into color stock but modern 3-D digital files, which are supplemented by archival interviews with the British soldiers who lived through the conflict. The result is startling. They Shall Not Grow Old shows the war as a generation of young men experienced it. The film is shown at 4 and 7 p.m. Monday, December 17, and 1 and 4 p.m. Thursday, December 27, at the AMC Creve Couer 12 (10465 Olive Boulevard, Creve Coeur; www.fathomevents.com). Tickets are $16.25.