The Best Things to Do in St. Louis This Week, December 6 to 11

The major drawback of the holiday season is it's relentless. Everything is Christmas-tinted, to the point that you become fatigued by it all and give up on participating in the festivities. But there's a way to overcome all that: Stop watching TV. If you avoid the barrage of commercials that commercialize the holiday, your Christmas feels a brighter and you want go out and celebrate it all. And this week there's a lot of places you can go to luxuriate in it, from Wintermarkts to the theater to Lafayette Square.

1. Blockheads Unite
The holiday season is a tough time for some people. There's less daylight, and it there's always a busybody urging you to "be jolly" and get into the "festive spirit." Hectoring doesn't make people happy — but what often does work is A Charlie Brown Christmas. Charlie Brown is one of those guys who has trouble finding his Christmas spirit when surrounded by crass commercialism. Greedy siblings, a school play heavy on spectacle and low on meaning, and constant criticism from his peers only send Charlie further into despair. And yet, when Linus reminds everybody of the reason for the season and the group comes together to apologize and sing carols in the yard, that's when joy resounds. The heartwarming holiday pick-me-up is recreated on stage by actors in A Charlie Brown Christmas Live on Stage. The show features the Vince Guaraldi score and an audience sing-along, and it takes place at 7 p.m. Thursday, December 6, at the Stifel Theatre (1400 Market Street; www.stifeltheatre.com). Tickets are $20 to $55.

2. T-Factor
The Living Arts Studio (2814 Sutton Boulevard, Maplewood; www.livingartsstudio.org) is dedicated to the idea that art is a human necessity. It offers classes, workshops and open studio time to artists with and without disabilities. Members of the studio work on their own and participate in group projects, experiencing both personal growth and the social benefits of the open studio format. While the studio receives funding from several state and national organizations, there's always a need for more resources — and you can help. The group's annual talent show takes place from 6 to 9 p.m. Friday, December 7, at the Living Arts Studio. Members will provide all the talent, performing comedy routines, singing and doing their best to entertain you. Tickets are $40 and include a cup or bowl, soup to put in it and drinks.

3. On the Down Low
Bob and Norma work for the U.S government, a good job in the 1950s. They're friends at work and after hours, a happy little foursome with the addition of Millie (Bob's spouse) and Jim (Norma's husband). Then Bob and Norma get a new assignment: Root out and expose any homosexuals working for the government. Senator Joseph McCarthy has denounced gays and lesbians as perverts, and at the time he got what he wanted. It's bad news for the duo, because they're living a lie. Bob and Jim and Norma and Millie are committed couples living under the cover of two fake marriages and a real friendship, and now it's all endangered. Can they betray their fellow homosexuals to protect themselves? Topher Payne's play A Perfect Arrangement draws from the tropes of TV sitcoms and the real-world Lavender Scare, which destroyed hundreds of lives because of one paranoid, power-hungry toad of a man. R-S Theatrics presents the play at 8 p.m. Friday and Saturday and 7 p.m. Sunday (December 7 to 23) at the Marcelle Theater (3310 Samuel Shepard Drive; www.r-stheatrics.com). Tickets are $20 to $25.

4. A Gay Old Time
Paul Rudnick reimagines and recasts Genesis (the book of the Bible, not the band) with his comic play The Most Fabulous Story Ever Told. Adam here is joined by his partner Steve in the Garden of Eden, and also by Jane and Mabel, the lesbians next door. Overseeing it all is a mysterious being with a headset and omnipotence (imagine the universe's most competent stage manager) who directs all action, including the two couples' eviction, the Great Flood and a lesbian wedding in modern-day New York. Stray Dog Theatre always mounts a December show that serves as an antidote to the sickly sweet cheer of the holiday season, and Most Fabulous Story is no exception. Performances are at 8 p.m. Thursday through Saturday (December 6 to 22) at the Tower Grove Abbey (2336 Tennessee Avenue; ww.straydogtheatre.org). Tickets are $25 to $30.

5. Markt it Down
In its continuing efforts to become your favorite local craft brewery, Urban Chestnut presents its WinterMarkt. The German-style Christmas market features more than 30 vendors selling everything from flowers to beads to photography at the midtown location of Urban Chestnut Brewery and Biergarten (3229 Washington Avenue; www.urbanchestnut.com). There will be beer specials, hot chocolate and German Glühwein (a seasonal favorite), as well as food and fire pits. The next WinterMarkt takes place from noon to 4 p.m. Saturday, December 8, and admission is free. There will be one more markt on Saturday, December 15, with a whole new roster of vendors.

6. What Day Is It?
The Nebraska Theatre Caravan has been performing Charles Jones' stage adaptation of A Christmas Carol since 1979. The world has changed greatly since then, but the show continues because of its timeless message that even the worst of us can change our ways. Ebeneezer Scrooge is a terrible excuse for a human being, berating and penny-pinching his employees to near starvation despite his considerable means. How does a man become so greedy and vicious that he mistreats even himself on sheer principle? Charles Dickens' beloved story warns that cutting yourself off from other human beings is a fate worse than death. The play is performed at 7:30 p.m. Thursday and Friday, 2 and 7:30 p.m. Saturday and 1 and 6 p.m. Sunday (December 6 to 9) at the Fox Theatre (527 North Grand Boulevard; www.fabulousfox.com). Tickets are $20 to $49. 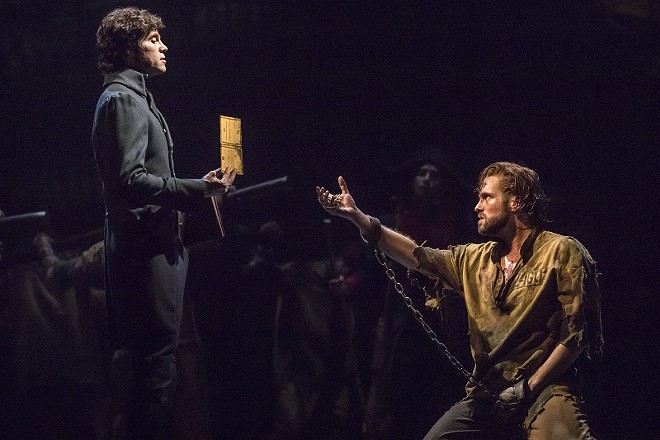 7. Parlor Tricks
The homes of Lafayette Square are renowned for their old St. Louis beauty, and that's just on the outside. Once a year a select number of residents welcome people into their homes to see the first-floor interiors, which are decorated for the holidays. The Lafayette Square Holiday Parlor Tour features access to ten homes and the holiday market, which features handmade goods and treats. You may have heard that trolleys are all the rage now, and one will be running a circuit of the participating homes to help you see all ten homes in the allotted time. The tour takes place from 10 a.m. to 5 p.m. Sunday, December 9, in Lafayette Square (Mississippi and Lafayette avenues; www.lafayettesquare.org), and tickets are $20 to $25.

8. Wanted Man
Valjean, a man of prodigious strength and moral character, has finally been paroled from prison, but he can't escape his past. No one wants to hire an ex-con, and only the genuine kindness of another frees him to start over with a new identity — but inspector Javert is still out there looking for him. In the Paris of the early nineteenth century, Valjean's promise to save a dying woman's daughter, political unrest and the unshakeable Javert all collide. And all because Valjean stole a loaf of bread to feed his starving nephew more than twenty years ago. Alain Boublil and Claude-Michel Schönberg's blockbuster musical Les Miserables returns to St. Louis with new staging and scenery, but the same songs and story. Performances are Tuesday through Sunday (December 11 to 16) at the Fox Theatre (527 North Grand Boulevard; www.fabulousfox.com). Tickets are $25 to $150.