The Best Things to Do in St. Louis This Week, November 29 to December 5 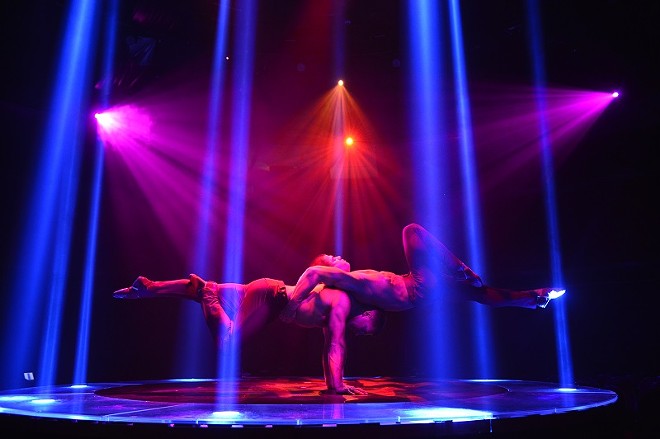 It's the end of November as we know and it feels fine. Let's embark on the beglitzed nightmare that is December with good cheer, for soon it too shall pass. In the meantime, enjoy the stage adaptation of Jean Shepherd's beloved film, a journey into the stop-motion world of Rankin/Bass but with live actors and one of the towering works of classical music. And spare a kind thought for the Strange Brew film series, which comes to the end of the road this Wednesday. It was people! The Strange Brew film series was made of people!

1. A Divine Sequel
In David Javerbaum's comic play An Act of God, the deity has returned to humanity in the form of a human man well known for his oddball charm in order to reveal his ten new commandments. The play was inspired by Javerbaum's Twitter account, @TheTweetOfGod, which delivers regular updates from the Man Upstairs. In the play, God goes to the theater ("it's where the Jews are"), not only to deliver the new revelation but also to take us mildly to task for misinterpreting his earlier work. It's a role that hinges on an empathetic actor who can strike the right balance of charm and parental disapproval, and for the New Jewish Theatre's production, the genial Alan Knoll dons the robe and sneakers. An Act of God is performed at 7:30 p.m. Wednesday and Thursday, 8 p.m. Saturday and 2 p.m. Sunday (November 29 to December 16) in the Wool Studio Theatre at the Jewish Community Center (2 Millstone Campus Drive; www.newjewishtheatre.org). Tickets are $42 to $45.

2. Print the Legend
Abstract art is a term that includes a wide variety of media: monochromatic color fields, hard-edged abstraction and its flat colors, and the sharply defined edges and optical illusions inherent in op-art's geometric forms. What links all of these styles together is that they are divorced from the traditional representation of physical objects. For its new exhibition Printing Abstraction, the Saint Louis Art Museum draws from its own holdings of abstract art created by printmakers. The show is something of an expansion of the museum's ongoing main exhibition, Graphic Revolution: American Prints 1960 to Now, in that it offers more examples of the printmakers' art and the key role it's played in the promulgation of abstract art. Printing Abstraction is on display from Tuesday through Sunday (November 30 to March 31) in galleries 234 and 235 of the Saint Louis Art Museum (1 Fine Arts Drive; www.slam.org). Admission is free.

3. Put a Word In
In Nina Raine's play Tribes, Billy is the odd man out in his own family because he was born deaf. His family are all great talkers, with his father, Christopher, a writer of "argumentative books," the loudest of all. They shout, bicker, insult and jostle for place at the table and in general, while Billy hears none of it. Instead, he reads lips from his position on the sidelines and butts in when he can. Billy's feeling of being on the outside starts to change when he meets Sylvia. Born hearing to to deaf parents, she learned sign language as a necessity; now she's losing her hearing and is terrified of the encroaching silence Billy has lived with all his life. The more time Billy spends with Sylvia, the more he realizes it's high time his family adapt to his world rather than the other way around. St. Louis Actors' Studio presents Tribes at 8 p.m. Thursday through Saturday and 3 p.m. Sunday (November 30 to December 16) at the Gaslight Theatre (358 North Boyle Avenue; www.stlas.org). Tickets are $30 to $35.

4. It's Too Much
St. Louis' Magic Smoking Monkey Theatre company ends every one of its gloriously cheap and howlingly funny plays with a free gift for one lucky audience member. This year, the company subverts that tradition entirely with its Holiday Extravaganza. The group will perform rapid-fire adaptations of the beloved Rankin/Bass Productions stop-motion Christmas specials Rudolph the Red-Nosed Reindeer and The Year Without a Santa Claus, which is essentially a gift to every person who goes. A live-action Heat Miser and Snow Miser singing their ultra-catchy songs? Come on! In the spirit of the holiday and the Rudolph special, the company asks that you bring a new, unwrapped toy to donate to the Misfit Toy Drive. Performances are at 8 p.m. Friday and Saturday and 2 p.m. Sunday (November 30 through December 2) and then at 8 p.m. Wednesday and Thursday and at 8 and 10:30 p.m. Friday and Saturday (December 5 to 8), and tickets are $10 to $15. It all takes place at the Regional Arts Commission (6128 Delmar Boulevard; www.stlshakespeare.org).

5. Muny-ficence
Charis, the St. Louis Women's Chorus, opens its 26th year with a tip of the collective cap to the Muny. Its new show, Meet Me in St. Louis, celebrates the Broadway musicals that have made it to the Muny's stage, from 42nd Street to Spamalot, but it also honors Broadway as a safe place for members of the LGBTQ community and the plays that prominently feature LGBTQ characters. From Rent to Fun Home, and all the way around to Aida, Charis will sing the songs that make musical theater and the Muny great. Meet Me in St. Louis is performed at 8 p.m. Friday and Saturday (November 30 and December 1) at the Missouri History Museum (Lindell Boulevard and DeBaliviere Avenue; www.charischorus.org). Tickets are $13 to $20.

6. Mighty Fine No. 9
Anton Bruckner's monumental Symphony No. 9 is dedicated to God. The composer labored over it for nine years at the end of his life. By the time he could see the finish line, Bruckner was too weakened to finish the score, leaving only three of the four intended movements completed. But what movements those three are; Bruckner conjures an enormous volume of sound to praise his chosen subject and uses swaths of silence and dissonance in what was at the time an unprecedented manner. Even in its incomplete state it was clear that something new had happened in music. The St. Louis Symphony, led by conductor John Storgårds, performs Bruckner's Ninth for the first time in almost 30 years at 10:30 a.m. Friday and 8 p.m. Saturday (November 30 and December 1) at Powell Hall (517 North Grand Boulevard; www.slso.org). Yes, that's a Friday morning concert on the 30th, so don't sleep in; if you miss this, it may be decades before you hear Bruckner's Ninth in Powell Hall again. Tickets are $25 to $88.

7. It's a Major Award
The evergreen holiday film A Christmas Story is based on the stories of the great Jean Shepherd, who mined childhood nostalgia and memories of his own family to tell an honest tale about the true meaning of Christmas from a child's point of view. It's Ralphie Parker's fervent dream that he wake up to a Red Rider BB gun on Christmas morning, but his parents are against it. So Ralphie tries to work the system to get his wish, first by writing the most beautiful essay about air rifles his teacher has ever read, and then by placing an order with Santa Claus. In between his schemes, Ralphie has to deal with his oddball family (why won't his kid brother just eat?), his friends and the neighborhood bully, Scut Farkus (he has yellow eyes!). The Repertory Theatre of St. Louis gives us all a gift with Philip Grecian's stage adaptation of A Christmas Story. Performances are Tuesday through Sunday (November 30 to December 23) at the Loretto-Hilton Center (130 Edgar Road; www.repstl.org). Tickets are $24 to $97.

8. Cirque du Yule
There's a lot going on in A Magical Cirque Christmas. Combining illusionists, the mind-bending acrobatics of cirque performers and Christmas music, the show is a superabundance of entertainment on one stage. Even more impressive is the fact that you only have one night to see it — it's literally a blink-and-you-miss-it evening of blink-and-you-miss-it performances. A Magical Cirque Christmas takes place at 7:30 p.m. Tuesday, December 4, at the Fox Theatre (527 North Grand Boulevard; www.fabulousfox.com). Tickets are $39.50 to $125.

9. An Odd, Familiar Flavor
The Strange Brew film series comes to an end this week, and its final selection is a corker. In the year 2022, the world is a slightly different place. Overpopulation and ecological damage have resulted in a shocking increase in homelessness and joblessness, and food is scarce. Fortunately, the Soylent Corporation has just released a new product that is both more nutritious and palatable than the older Soylent Red and Soylent Yellow. The new Soylent Green is even now being distributed as part of the free ration system. When detective Frank Thorn (Charlton Heston) is assigned to investigate the murder of a wealthy industrialist, he unwittingly follows a trail that will lead him to the secret ingredient in the Soylent Corporation's new product. The 1973 film Soylent Green is an essential part of pop culture, thanks to Heston's final, shouted lines. Those last words are the original spoiler, and they never fail to get a laugh when you test out a new recipe that tastes terrible. Soylent Green starts at 8 p.m. Wednesday, December 5, at Urban Chestnut Grove Brewery (4465 Manchester Avenue; www.webster.edu/film-series). Tickets are $5. Thanks for the weird memories, Strange Brew Crew.