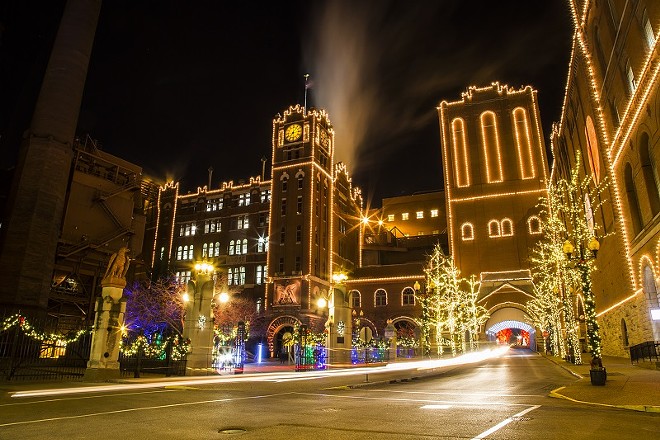 Thanksgiving is done and America now runs headfirst into Christmas mania. If you're not a fan of excessive light displays, tinsel and the rest of it, it's gonna be a long, tough month. On the non-Yule side? Well, the St. Louis Blues have a new coach (Craig Berube, one of the best enforcers the NHL ever had), the Christopher Reeve Superman movie is back on the big screen and there's a Game of Thrones party to tide you over 'til the show comes back.

1. Lights, Beer
You have to give Anheuser-Busch credit: The big brewery in town has crammed more Christmas stuff than ever into its light display this year. There are the traditional lights winking from every cornice and edge of every building in the brewery complex, the return of its own ice-skating rink, a new kids' zone and brewery express train, and holiday movies shown on a big screen nightly during regular hours. If you want to experience everything the season has to offer, it's all there. Anheuser-Busch's brewery lights are on every night, but the other activities only happen from 5 to 10 p.m. Thursday through Sunday (November 12 to December 30) at the Anheuser-Busch Brewery and Tour Center (1200 Lynch Street; www.budweisertours.com). Admission is free, but train rides are $3 and there's a suggested $3 to $5 donation for skate rental. Skating is free if you have your own skates, but why not donate anyway?

2. Have a Zoo Christmas
U.S. Bank Wild Lights at the Saint Louis Zoo (1 Government Drive; www.stlzoo.org) opens this weekend from 5:30 to 8:30 p.m. Friday to Sunday, and once again it's in the running for Best Zoo Lights in the country in USA Today's annual poll (voting is open until December 10, if you're so inclined). U.S. Bank Wild Lights features more than 1 million lights strung throughout the zoo, and families can also enjoy storytellers, campfire s'mores, ice-carving demonstrations on weekends and special nighttime viewings of Penguin & Puffin Coast and the Monsanto Insectarium. This year the zoo's 4D theater is showing The Polar Express for free during the Wild Lights nights, and the always-popular Conservation Carousel is likewise free to ride. Sessions resume from 5:30 to 8:30 p.m. Wednesday to Sunday (November 28 to December 23, and then every night except Christmas Eve and Christmas from 5:30 to 8:30 p.m. (December 26 to 30). Tickets are $8 to $11, and kids younger than two are free. 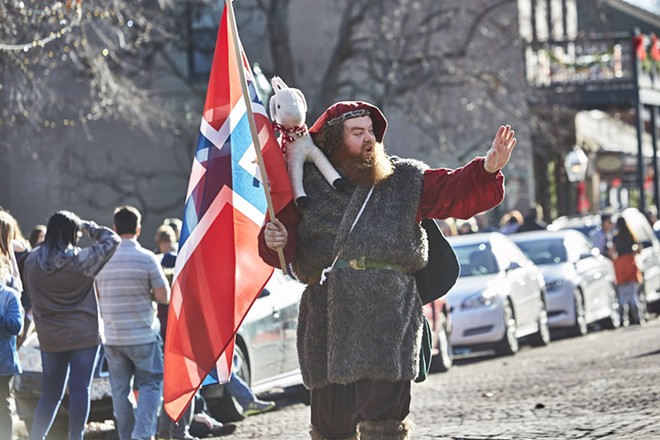 3. Nice & Naughty
Traditionally, there's only ever one Santa Claus on the job — that's what makes him so special. But at St. Charles Christmas Traditions, all the iterations of Santa Claus from other cultures and times gather in historic downtown St. Charles (South Main Street and Jackson Street, St. Charles; www.historicstcharles.com), which allows you to meet and take a picture with some far-out Santa variants and other assorted holiday characters. There's Ded Moroz ("Old Man Frost"), who brings the well-mannered children of Slavic countries their presents, and Julenisse, the Scandinavian supernatural being associated with the Winter Solstice. Non-Santa costumed characters include a reindeer flight instructor, Jack Frost, the Ice Queen and Julia D. Grant, the St. Louis-born wife of Ulysses and America's former first lady. St. Charles Christmas Traditions opens with a big brouhaha from 11 a.m. to 9 p.m. Friday, November 23. The fun resumes from 6 to 9 p.m. Wednesday and Friday, 11 a.m. to 9 p.m. Saturday and noon to 5 p.m. Sunday (November 24 to December 24). In some cultures, Santa Claus has a mischievous counterpart; on Wednesday nights from 6:30 to 8:30 p.m., the Krampus gets his time to shine during Krampusnachts. At 8:13 p.m. he spins his Wheel of Misfortune in the Colonnade, joined by unsavory pals the Mouse King, Jolakotturinn (Iceland's ferocious Yule Cat, who eats people who don't get new clothes for Christmas) and the Abominable Snowman. If you feel like you can't keep all these beings straight without a scorecard, you're in luck: Special trading cards are available for each of them. Admission is free, and most shops and restaurants in the downtown area will be open for business during Christmas Traditions hours.

4. New Blues?
The St. Louis Blues are still skidding along the bottom ranks of the NHL, which has confounded experts and fans alike. Wasn't this team supposed to be better than this? Meanwhile, the Blues' next opponents, the Winnipeg Jets, are flying high, thanks to balanced scoring and a killer instinct. It's still early enough in the season that the Blues could vault the Jets in the standings by the end of the year — especially now that Craig Yeo is gone and Craig Berube has taken over coaching duties — and the Saturday, November 24, game between the two teams would be a great time to start on that. The puck drops at 6 p.m. at the Enterprise Center (1401 Clark Avenue; www.stlblues.com), and tickets are $44 to $195.

5. Party Wargs
George R.R. Martin's A Song of Ice and Fire has become Dungeons and Dragons for non-nerds. Is it the power of his prose that made the books a lifestyle, or is it the allure of a good-looking cast on a cable channel with no network censors to child-proof all the good stuff? The world may never know. What is known, however, is that winter is coming, and the Budweiser Brewhouse at Ballpark Village is spreading the word. At 8 p.m. Saturday, November 24, the brewhouse's Crown Room (of course) will host a Game of Thrones party with themed entertainment and cocktails, and free party favors (while they last). You should of course dress in your best Westeros garb — and keep one eye open for white walkers. Admission is free, and there will be prizes for the best dressed, so keep your clothes on if you're going as Daenerys.

6.A Private Capade
Ice skating and hot cocoa go together like Christmas and carols. Every year, Steinberg Skating Rink in Forest Park (www.steinbergskatingrink.com) is open from early November to late February, providing the Midwest's largest outdoor rink for the low price of $7 a day. Your $7 is good for the whole day, from 10 a.m. to 9 p.m. Sunday through Thursday and 10 a.m. to 11 p.m. Friday and Saturday. Skate rental is another $7, which is a steal — but just because it's so affordable doesn't mean you have to bring the family. If you're tired of the in-laws, their kids or just want to get out of the house, Steinberg is there for you. Nothing clears the head like a brisk skating session and hot cocoa by an outdoor fire. 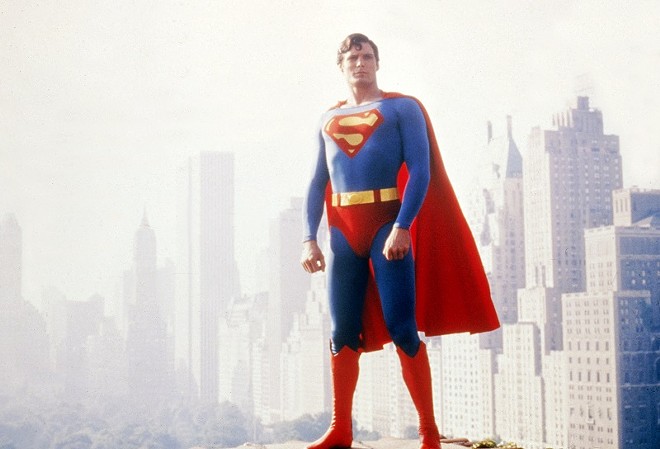 7. We Need A Hero
Superheroes weren't always the cash kings of the Hollywood box office. Forty years ago the idea of someone making a movie about comic-book characters was almost unimaginable. Richard Donner changed all that with the blockbuster film Superman. Actor Christopher Reeve looked the part and made a great Clark Kent to boot, Margo Kidder played hard-charging reporter Lois Lane and only bad guy Lex Luthor (Gene Hackman) killed anyone. Throw in a convincing romance and some great sidekick work by Ned Beatty and you have an entertaining family film that still stands up. Warner Bros. and Fathom Events celebrate the ruby anniversary of the movie by getting it back in the theaters. At 7 p.m. Sunday, November 25, you can see Christopher Reeve fly through Metropolis again at the Marcus Wehrenberg Ronnies 20 (5320 South Lindbergh Boulevard; www.fathomevents.com). Superman is shown with the great Max Fleischer-animated Superman short from 1941, "The Mechanical Monsters." Tickets are $12.50. 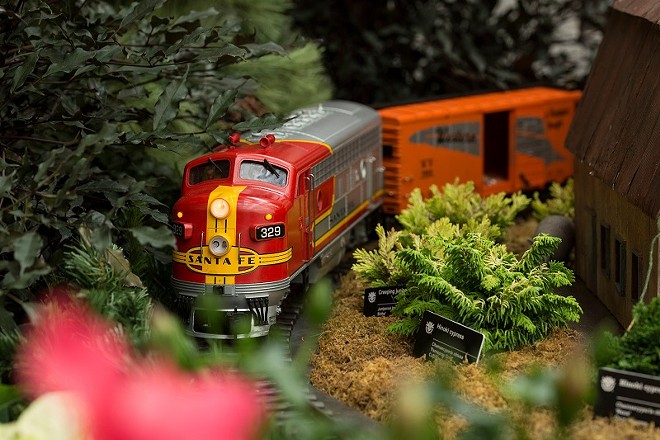 8. Trains Keep A-Rollin'
Families once gathered to build their own holiday train sets under the Christmas tree, but it's a disappearing pasttime. Still, there's something magical about a well-built model train setup with buildings, little people and personal touches. Maybe Santa Claus is the engineer, or a tiny James Gang is waiting around the bend. The Missouri Botanical Garden (4344 Shaw Boulevard; www.mobot.org) keeps the tradition alive with its annual Gardenland Express Holiday Flower and Train Show. Six tracks of model trains roll through hand-built scenery, which is surrounded by a landscape of living plants. It's an elaborate setup that rewards the careful observer, and it's open daily through January 1 (closed Christmas Day). Tickets are $5 per person in addition to regular garden admission.