The Best Things to Do in St. Louis This Week, November 9 to 13 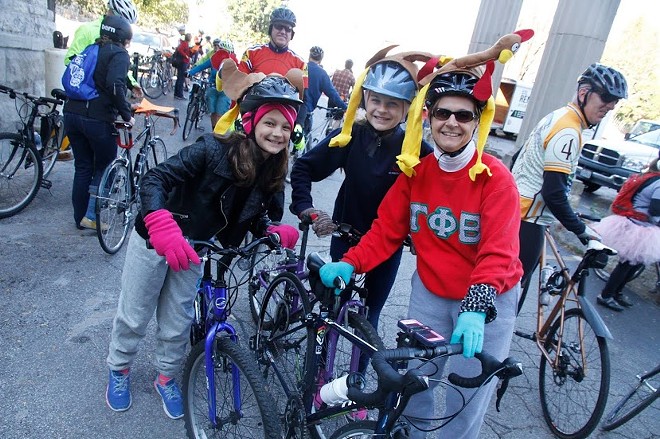 There's a chill in the air and our mailboxes are once again free of political junk mail, which means it's time to party. There are classic operas to enjoy, an introduction to high-tech snowglobes and a massive exhibition of the printmaker's art — and we still haven't mentioned Cranksgiving.

We have such a brief window to enjoy ourselves before the holidays swamp us all, so get out and live.

1. The Original Batman
While known as "the Waltz King," Johann Strauss II also wrote for the stage, and his most popular work remains Die Fledermaus. The operetta is a comic tale of mistaken identities, disguises and a mostly harmless plot to exact revenge on a friend for a past prank. Eisenstein is a wealthy Viennese gent facing a brief jail sentence for insulting an important person, but forestalls his time in the clink by a day so he can go the season's big ball. What Eisenstein doesn't know is the whole ball is a setup arranged by Falke, the target of Eisenstein's last prank. Mrs. Eisenstein is there to trap her husband in a near-infidelity, the maid is in on it, and all Falke has to do is watch his friend put his head in the noose. Winter Opera St. Louis opens its new season with Die Fledermaus. Performances are 7:30 p.m. Friday and 3 p.m. Sunday (November 9 and 11) at the Skip Viragh Center for the Arts (425 South Lindbergh Boulevard; www.winteroperastl.org). Tickets are $35 to $55, but the company's new student night on Friday allows young patrons to enjoy drinks and pizza before the show in addition to $10 tickets for the opera. Advance reservations recommended.

2. Sex Game
The great Alexandre Dumas began his writing career in the theater as a dramatist, with the occasional comedy as well. His Mademoiselle de Belle Isle was a five-act farce about lovers and a seduction contest. Vladimir Zelevinsky has loosely adapted and condensed the story down to a more manageable length in the two-act comedy, The Great Seduction. It's about a duke and countess who are paramours (but not exclusive), and Gabrielle, a fresh country girl just arrived in Paris. The duke is immediately taken with her, while the countess has set her sights on the handsome Raoul. Incensed by the young competitor's presence, the duke bets Raoul he can seduce the first woman he sees. Care to guess who shows up? (It's Raoul's fiancee, Gabrielle.) West End Players Guild presents the bedroom farce The Great Seduction at 8 p.m. Thursday through Saturday and 2 p.m. Sunday (November 9 to 18) at the Union Avenue Christian Church (733 North Union Boulevard; www.westendplayers.org). Tickets are $20 to $25. 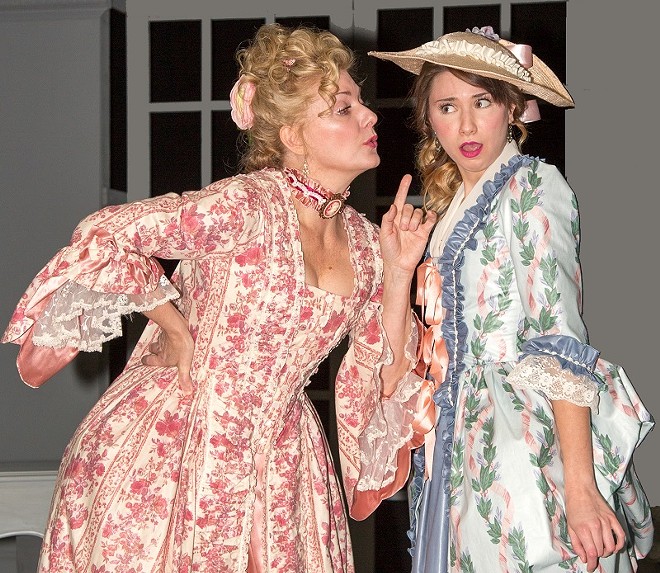 3. Snow on Saturday
Have you thought about snow globes lately? The cool souvenir of your childhood is coming back in a big way thanks to Snow Day. The St. Louis-based company makes custom snow globes using cutting-edge technology, and you can see the results at the Snowball. Snow Day commissioned Alicia LaChance, Sarah Paulsen, Justin Tolentino and more than 30 other local artists to construct unique, small-house models. Each model is then captured from all sides and angles using digital video, which is then fed into a computer using a special program. The computer file is exported to a state-of-the-art, full-color 3D printer, which forms a three-dimensional model to be placed inside a globe, creating a one-of-a-kind keepsake. See and bid on the finished products at the Snowball's silent auction, with proceeds going to St. Louis Winter Outreach's Assisi House, which helps homeless people transition to housing. The Snowball runs from 7 to 11 p.m. Saturday, November 10, at Rockwell Beer Company (1320 South Vandeventer Avenue; www.itsasnowday.com), and also features live music by the Heavenly States, DJ Thomas Crone (he does many other things as well, including write for the RFT) and co-hosts Kat Kissick, Maxi Glamour and Michelle Schaeffer. Admission is free.


4. The Swashbuckler's Swashbuckler
It's no understatement to say that Douglas Fairbanks was one of the people who made Hollywood what it is today. The silent-age actor was both dashing and daring, playing a jaunty Robin Hood and an exuberant Zorro while doing his own stunts. At the time Fairbanks was working, Hollywood was more artists' colony than cinematic capital of the world. When he joined with his fiancee Mary Pickford and friends Charlie Chaplin and D.W. Griffith to create the United Artists studio, they laid the foundation for the modern showbiz industry. The documentary I, Douglas Fairbanks uses film clips, newsreels and first-person narration (provided by actor Peter Facinelli) to tell the story of the "King of Hollywood" and how his kingdom came to be. Also on the bill is the Alan Dwan silent film The Halfbreed, Fairbanks' stab at being a serious actor, with the original score and live accompaniment by the Rats & People Motion Picture Orchestra. The double bill is shown at 7 p.m. Saturday, November 10, at Webster University's Moore Auditorium (477 East Lockwood Avenue; www.cinemastlouis.org) as part of the St. Louis International Film Festival. Tickets are $20.

5. Revolutionary Art
The 1960s were a period of social upheaval and radical change in America, and no art form captured that churning spirit better than printmaking. Printmakers have always had one foot in the commercial art world and one in the realm of fine art, and that hybrid nature allows them to adapt to new technologies and new thinking more quickly than, say, sculptors. Graphic Revolution: American Prints 1960 to Now, the exhibition at the Saint Louis Art Museum (1 Fine Arts Drive; www.slam.org), is a treasure trove of startling images. Featuring more than 100 works drawn from the museum's holdings and local private collectors, Graphic Revolution includes landmark prints by the big names (Andy Warhol's Campbell's Soup II, Robert Rauschenberg's Signs) and less famous but no less astonishing pieces by modern masters such as Julie Mehretu and Edgar Heap of Birds. The show is open from Sunday, November 11, to February 3. Tickets are $6 to $14, but free to all on Friday.

6. Charity Begins on a Bike
If you want to donate food for the hungry during the Thanksgiving season, it's best to send your gift early — the sooner you do it, the better everybody's holiday dinner will be. Cranksgiving, the annual cycling-based fundraiser presented locally by St. Louis Bicycle Works, is a great way to do your part. Participating cyclists gather at the Schlafly Tap Room (2100 Locust Street; www.bworks.com/cranksgiving) at 8 a.m. on Sunday, November 11, pay the $10 to $15 entry fee and then pick a route to ride. Along the way they stop at participating grocery stores and buy non-perishable food, particularly canned tuna or chicken, peanut butter and Mandarin oranges. Upon return to the Tap Room, all of the groceries and entry fees are donated to Operation Food Search. Last year the St. Louis event resulted in more than 8,400 food items, more than any other city; it would be nice to break that record this time out. 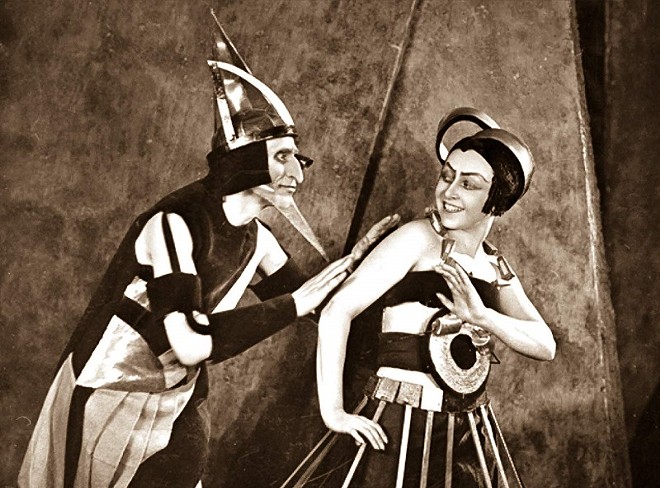 7. Soviet Sci-Fi
The Kemper Art Museum wraps up its Technofutures Film Series with the early Soviet Russian film Aelita: Queen of Mars. Los and Spiridinov are engineers who receive a startling radio message that was transmitted around the world, even as Los feels as if he's being constantly watched. Compelled to discover who it is observing him, he builds a spaceship and journeys to Mars with a revolutionary comrade. There he finds that it's Aelita, the Queen of Mars, who has been observing him. But why does the highly advanced Martian society keep its working class in cold storage when they're not on the job? And who really runs Mars? The film's subtext is very Soviet in nature (it was made barely six years after the revolution), but the costumes and scenery are cutting-edge Constructivist masterpieces courtesy of designer Sergei Kozlovsky, painter Alexandra Exter and theater artist Isaak Rabinovich. Aelita: Queen of Mars is shown at 7 p.m. Monday, November 12, at the Landmark Tivoli Theatre (6350 Delmar Boulevard, University City; www.kemperartmuseum.wustl.edu) and admission is free.