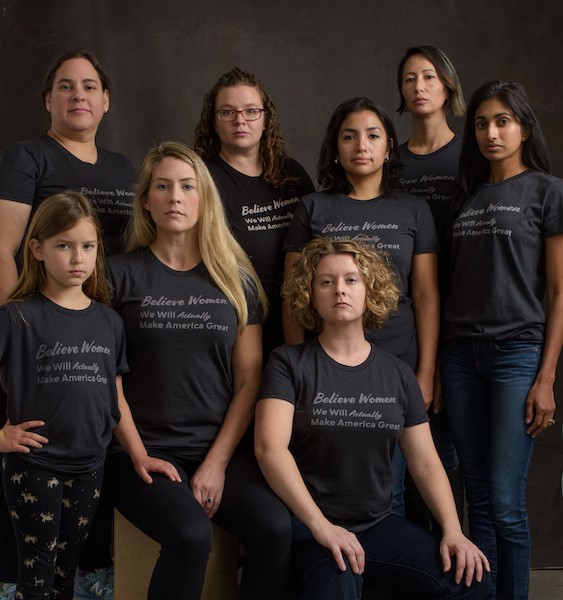 To Gray-Swain, these shirts allow people to show their support for women in a time when many feel as though their voices are not being heard. “We’re no longer standing in the shadows,” she says.

Men can also show their support by purchasing a shirt stating, “Believe Women. They Will Actually Make America Great.” The t-shirts come with postcards with the slogan printed on them, allowing the customer to send a message to a politician. Gray-Swain is donating 50 percent of all profits to the American Civil Liberties Union to help stop President Trump’s attacks on civil rights and voter suppression.

Each shirt is priced at $20. Customers can spend an additional $10 to send a second shirt to the politician of their choice in the U.S. Senate or House of Representatives. In that way, they can provide a shirt to a politician they like or send a message to one they don't. “Even if they give the shirt to Goodwill, someone will end up wearing it,” Gray-Swain says.

Only one shirt can be sent to each politician to avoid any unnecessary waste. “This way, Roy Blunt will not receive 15 shirts,” Gray-Swain says.

Gray-Swain is the owner of Sprouted Designs, a screenprinting business that she runs with her husband. He's her partner in Believe Women Apparel; they're also raising a three-year-old daughter.

Gray-Swain decided to start the clothing line after witnessing the testimonies of Supreme Court Justice Brett Kavanaugh and Christine Ford, who claimed Kavanaugh had sexually assaulted her in high school.

“Listening to Ford’s testimony was so heart wrenching,” Gray-Swain says.

Gray-Swain expressed her dismay at the thought of having to explain to her daughter someday that she is not safe from sexual abusers, no matter where she is. During the weekend following Kavanaugh’s hearing, she decided she wanted to make a difference for women in some way.

“Something had to be done,” Gray-Swain says. “I thought to myself, ‘What can I do, even to have just the tiniest impact?’”

During the last month, Gray-Swain has been setting up her operation. Gray-Swain orders the shirts from Allmade Apparel, an environmentally conscious company that uses recycled water bottles to create T-shirts. Allmade also pays Haitian workers living wages while providing safe working conditions. The shirts are then shipped to Gray-Swain who does the printing herself.

Believe Women Apparel made its public debut last weekend at Tower Grove Farmer’s Market; Gray-Swain hopes to sell the shirts at more events in the future. Products can also be ordered from www.BelieveWomenApparel.com.

Editor's note: A previous version of this story provided an incorrect name for Amanda Gray-Swain's screen-printing business. It is Sprouted Designs, not Sprouting Design. We regret the error.