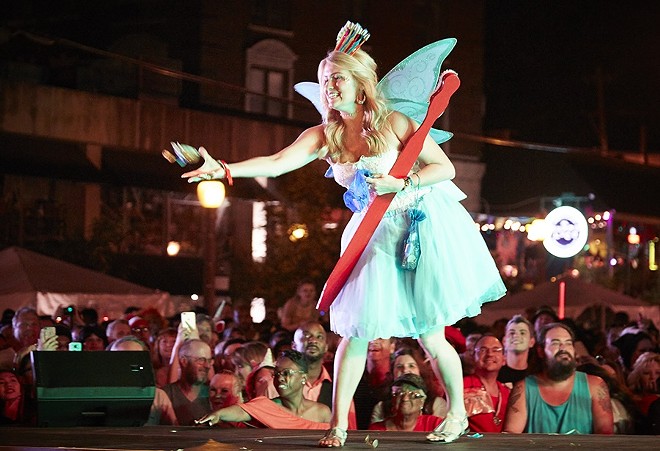 In accordance with the strange logic of presidential birthdays, Halloween this year is celebrated on Friday and Saturday night rather than Wednesday, October 31. If you're hardcore, you're going to be in costume every chance you get, and there are a lot of opportunities in this week's list. If you're all horrored out by the preceding 363 days, don't worry — there's a new play about America's race problem and a comedy about WW II-era St. Louis and the efforts women went to for entertainment. Also, a live visit from the Mystery Science Theater 3000 crew with 'bots, Joel and new guy Jonah.

For a complete list of Halloween parties and events, see our roundup.

1. Horror in the Opera
There's an art form to playing a live score for a silent film. The band has to match the pace of the action on-screen, the music has to support the story without drawing too much attention to itself and, on top of all that, the musicians must still keep in synch with each other. The Invincible Czars of Austin, Texas, honed its craft while accompanying weekly screenings at the Alamo Draft House, and really leaned into the art form. The band has original scores for a host of films that require a small music shop's worth of instruments — and also devises unique wardrobes for each one. The Invincible Czars rolls into town to perform with the terrifically creepy 1925 version of The Phantom of the Opera, which stars Lon Chaney. The movie starts at 7:30 p.m. Thursday, October 25, at Webster University's Moore Auditorium (470 East Lockwood Boulevard; www.webster.edu/film-series), and tickets are $10. 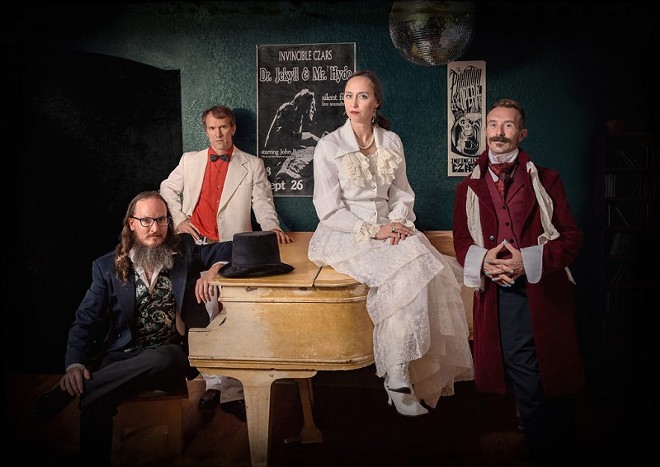 2. White People Problems
Sherri Rosen-Mason works as the admissions director for a prep school, but she's "one of the good ones." She fights both to diversify the school and its brochures, which is right in line with her ardent progressive politics. Understandably, Sherri is blindsided when her teenage son Charlie claims his mother's convictions and policies deny him opportunities, and the proof is that Yale has passed him over while his mixed race friend was accepted. Can Sherri and her husband Bill remain true to their ideals if their son is denied the quality education they want him to have? Joshua Harmon's play Admissions, a deep dive into the nature of white privilege, opens the Repertory Theatre of St. Louis' Studio Series. Performances are Tuesday through Sunday (October 26 to November 11) at the Loretto-Hilton Center (130 Edgar Road; www.repstl.org). Tickets are $46 to $71.

3. Ladies Under Siege
Witches are a hot topic around Halloween, but it's not like the old days. Back in the sixteenth century, the original old-time religion could get a woman killed, even if she wasn't a practitioner. If women lived alone, or knew about the medicinal properties of herbs and flowers, or had a cat, they could be accused of witchcraft. Today women aren't prosecuted for any of those things — although modern advertising makes sure they're still tortured for being different or failing to adhere to modern beauty standards. Theatre Nuevo marries these two forms of woman-hating in its newly devised play, whither should i fly. Inspired equally by the sixteenth-century witchcraft that appears in the Faust legend and the military-grade beauty-industrial complex, the play explores the way society keeps creating new ways to control women. whither should i fly is performed at 8 p.m. Thursday through Saturday (October 25 to November 11) at the Centene Center for Arts & Education (3547 Olive Street; www.theatrenuevo.com). Tickets are $15. 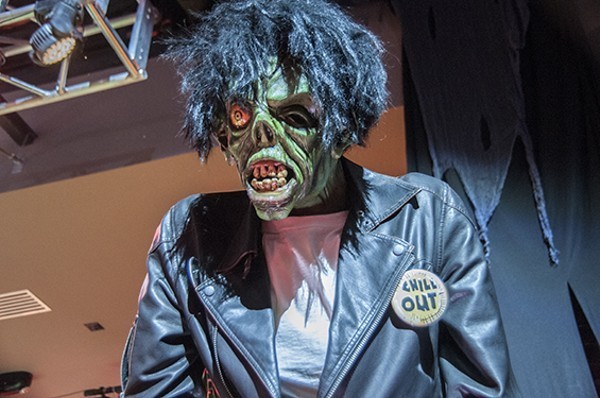 4. Party Town USA
There are Halloween parties, and then there is the Central West End Halloween Party. The all-day, outdoor celebration starts at 11 a.m. Saturday, October 27, with a kids' costume party and parade, led this year by Cinderella and her magical carriage. At 1 p.m. the costume parade for dogs and their people starts, and then general revelry continues until 6 p.m. when the adults-only party begins. The big event is the costume contest, which always features the most creative and inspired costumes in the city because $6,000 in cash and prizes is up for grabs to the best of the best in various categories. Competing in the adult contest costs $25 for individuals and $50 for groups (cash only), but entry to the event is free. The CWE Halloween Party is centered on the intersection of Maryland and Euclid avenues (www.cwescene.com). Pretty much all the neighborhood restaurants and businesses participate in one way or another, so bring your party money to ensure a good time.

5. Step into the Party Dungeon
Halloween falls on a Wednesday, which isn't really the ideal party night. By order of the Great Pumpkin (lo, do we fear and honor thou), dispensation has been given to allow for parties to commence on the more amenable Saturday. Johnnie Brock's Dungeon Halloween Party obeys, with an 8 p.m. start on Saturday, October 27, at Ballpark Village (601 Clark Street; www.stlballparkvillage.com). It's perhaps the biggest indoor fete of the season, spreading from the Budweiser Brew House to PBR St. Louis to FOX Sports Midwest Live. The Joe Dirt Band performs live, DJ Deception spins and then there's the big draw — the costume contest with $10,000 in cash and prizes. Judges will roam from 7 to 10 p.m. seeking the fifteen bests costumed revelers to advance to the finals, with the winners chosen by audience vote. Tickets are $40 to $50 and are all-inclusive for draft beer, house wine and well spirits, which makes this a 21-and-older party. Sorry, kids — stick with the candy.

6. The Show Goes On
As World War II rages in Europe and the Pacific, a group of St. Louis women have to keep the home fires burning. Those fires don't just burn wood, though; the ladies all miss going to the theater. With the men at war and the theaters closed for the duration, an idea is hatched. It's time for a new production of Henry V, with an all-female cast storming Agincourt. George Brant's comedy Into the Breeches! makes its St. Louis debut as part of Shakespeare Festival St. Louis' In the Works program. The family-friendly play A Most Outrageous Fit of Madness (inspired by The Comedy of Errors) and two staged readings of Michael Saenz's The Thousand Natural Shocks round out the program. Into the Breeches! runs Wednesday through Sunday (October 28 to November 18) at the Grandel Theatre (3610 Grandel Square; www.sfstl.com). Tickets are $25 to $55.

7. Quipping the Light Fantastic
The cult TV show Mystery Science Theater 3000 made a triumphant return to broadcasting thanks to a wildly successful crowdfunding mission and Netflix. Because of that, the MST3K 30th anniversary tour feels much more like a celebration of the show than an exercise in pure nostalgia. Series creator and original host Joel Hodgson is back in his red jumpsuit, and he'll join current host Jonah Heston (Jonah Ray to his family) for an evening of sketches and robot-grade nonsense from Crow T. Robot and Tom Servo. Once assembled, it's only natural that the bots and both hosts riff on a film together. St. Louis will see Canadian sci-fi flop The Brain skewered live by the full cast. The MST3K 30th-anniversary tour visits the Stifel Theatre (1400 Market Street; www.stifeltheatre.com) at 7:30 p.m. on Tuesday, October 30; tickets are $36.50 to $46.50.

8. A Noble Effort
Christopher Marlowe was a contemporary of William Shakespeare, and Marlowe's plays were a large influence on Shakespeare's own. Of course, Shakespeare's work greatly eclipsed Marlowe's in popularity, consigning him to the past. Doctor Faustus is undoubtedly Marlowe's most famous play still — perhaps because of a persistent legend that actual devils appeared on stage during a sixteenth-century performance. John Wolbers has adapted the script for the modern era, while still keeping much of the original's poetry. Now the female Doctor Faustus is disgusted by the rampant abuse of power and position of the world's leaders, and so enters into a contract with the devil. She plans to use her new power for good, to save the weak and bring mercy to the world. But ultimate power has a nasty effect on the human soul, even when it's a noble one. Slightly Askew Theatre Ensemble presents Doctor Faustus at 8 p.m. Wednesday through Saturday) October 31 to November 17 at the Chapel (6238 Alexander Drive; www.slightlyoff.org). Tickets are $15 to $20.