Jason Spencer's Insane Art Is Taking Over St. Louis, One Wall at a Time 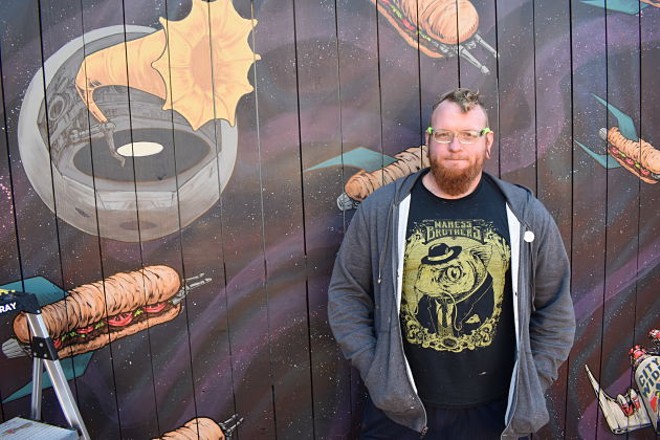 It would be fair — and frankly a dramatic understatement — to describe Jason Spencer's art as "off-the-wall."

His subject matter certainly fits that description. There's a walrus with five eyes and a set of severed arms, floating as they adjust the crown perched on the beast's head. There's a deranged unicorn with blood dripping from its mouth, ripping its own chest open to form a heart-shaped hole liberating a rainbow dotted with skulls and bones. There's a fish holding a can of gasoline and a rag in its human arms, drinking from a can of oil over a banner that reads "Skip class, huff gas."

There are a lot of fish, actually. Most notable for our purposes is the one that accompanies the words "Exercise Your Demons," a slogan that also serves as the name of an upcoming group show he's participating in at Cherokee Street Gallery (2617 Cherokee Street), opening October 27 and running through the 31st.

Says Spencer, 31, "It's a fish with boobs and sweatbands on, holding a crucifix." He adds with a laugh, "And it's spelled 'exercise,' like working out. So it's for fitness."

Spencer's love of drawing scaly sea life started through a partnership with local blues-rock act the Maness Brothers, near the time of their first-annual Whiskey War Festival some seven years ago.

"They asked me to do a gentleman catfish for a t-shirt design," Spencer explains, "and I was like, man, I actually love drawing fish now."

The Maness Brothers are far from the only band to take note of Spencer's chops. Through his Killer Napkins brand, which primarily peddles t-shirt designs, Spencer has worked with Panic! at the Disco, the Black Dahlia Murder, Suicide Silence and numerous others. And he's currently in the process of drawing art for local metal act Voidgazer's upcoming album.

But Spencer's art doesn't just come through partnerships with musical acts. In fact, despite his determinedly off-the-wall style, the walls of St. Louis are exactly where you're most likely to see his work.

Spencer's mural of a skeleton surfing a slice of pizza on a wave of PBR while firing lightning bolts out of a guitar graces the side of Pizza Head on South Grand. An alien creature with three heads, two of which blast fire from their eyes and mouths, rises from a murky swamp bearing bottles of 1220 Origin Gin on an interior wall at the Ready Room. These days, Spencer is working on a wall on the patio of the Gramophone, painting a mural that depicts sandwiches and cans of 4 Hands' City Wide beer as spaceships flying through the galaxy.

"It's gonna look a lot better with the lasers and stuff," he says.

Asked just how many murals in the city of St. Louis he is responsible for, Spencer is unsure — there are simply too many.

"Oh man, I'd have to think about that," he replies before counting on his fingers. "I think I had like... I'm trying to think of what I just did last year. I think it was somewhere in the ten or twelve range, and I think I'm doing even more this year. I think it's been a more busy year."

He thinks for another couple moments, then simply gives up.

"Yeah, I gotta sit down and look at each one," he laughs. 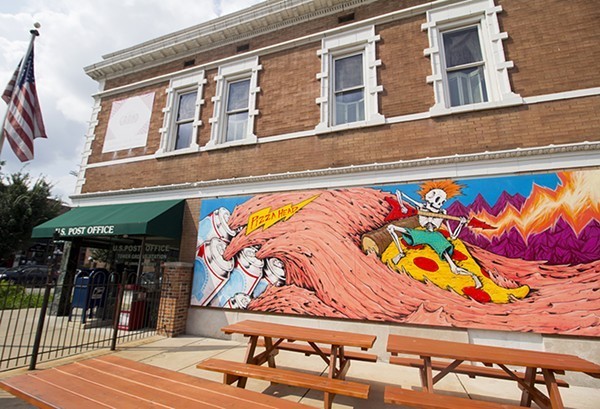 Spencer got his start in the large-scale medium after traveling to Memphis to spend time with an artist friend, who hooked him up with a wall to paint. While he was working there, Spencer was interviewed for a short video that wound up making the rounds in artistic circles.

"That got seen a lot," he says. "And as soon as I came back I got a job painting Atomic Cowboy through Pabst Blue Ribbon."

Spencer soon began working with other breweries as well, most notably 4 Hands, for whom he's done several murals. The breweries pick the venues and pay for his time, he says, while the venue owners often add a little artistic input (a Gramophone employee suggested the space theme, for example).

The work opportunities have become so plentiful, Spencer says, that he was able to quit his day job in construction at the start of 2017. He now makes his living entirely off of his art, with the murals paying the bulk of the bills.

Still, it's his more insane, more off-the-wall artwork that will be on display at Exercise Your Demons.

"I've got a bunch of wood cutout pieces that I made a little while ago, a bunch of weird demon things," he says. "You know, I heard it was gonna be like a Halloween-based show, so I got some of my scary work in there. The more macabre stuff. I guess I kinda tame it down when I'm doing murals.

"I get weird, weird as hell if I can do whatever I want to do, when I'm doing stuff for art shows," he adds. "Because who cares?"


Exercise Your Demons will run from Saturday, October 27 to Wednesday, October 31, and will feature art and photography by Jason Spencer, Lauren Marx, Rebecca Bolte, Dan Mutchlor and Ben Lowder. On October 31, the bands Redbait, Lizzy Quinn and the Ontario Survival Plan, and Abi Ooze will perform.