A St. Louis School Teaches Only Refugees and Immigrants. Day One Tells Its Story 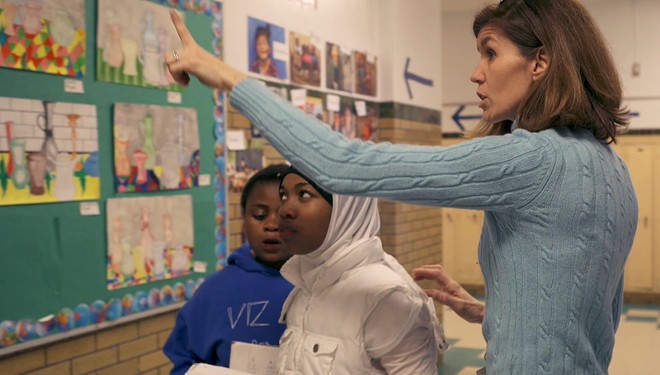 For nearly ten years, Nahed Chapman New American Academy has helped refugee and immigrant children adjust to a new life in St. Louis. Now the transitional public school and its students are being featured in Day One, a documentary set to premiere at the 2018 St. Louis International Film Festival.

Day One is directed and produced by Los Angeles filmmaker Lori Miller. Miller has acted as a producer for documentaries in the past and has directed segments of those films, but Day One marks her first time directing an entire film.

"It has been a great transition. I guess as a woman, I kind of saw myself in a supportive role to other people,” Miller says. “It was exciting for me to try and tell the story without relying on somebody else.”

Part of the St. Louis Public Schools, Nahed Chapman New American Academy helps children coming from war-torn countries who have experienced trauma and do not speak English well. The students study at this school until both they and the faculty agree they’re prepared for regular public school.

"It helps them get acclimated before being thrown into public schools," Miller says. Miller and her crew filmed on and off at the school for the duration of a school year, ending in June 2017, and collected roughly 80 to 90 hours of footage.

Miller was introduced to the subject of the documentary by Peter Tao, a friend and longtime St. Louis resident. Tao’s father was an immigrant from China who came to the U.S. to teach at Washington University. After growing up as one of the few immigrants in the city, Miller became interested as an adult in refugee resettlement and immigration in St. Louis.

Although the two friends studied architecture in colleges in New York at the same time — Miller at Barnard College and Tao at Graduate School of Architecture, Planning and Preservation – they actually met during a trip to China.

"We stayed friendly over the years," Miller says. "I was actually his wife's roommate in graduate school too."

Tao had learned about Nahed Chapman New American Academy through the International Institute of St. Louis. Through a project with Washington University and the Construction Forum STL, Tao and other members of the community helped raise $200,000 to build a soccer field play structure for students.

Miller describes Tao as "outspoken" about topics he is interested in. "He wooed me over over a period of time to look at the school, look at the subject," Miller says. Tao had initially suggested using the building of the exterior school grounds as the film's focus. Miller had to shut the idea down, telling him, "I can't make a film about it because you already did it."

Still, Miller was interested in the school. She came to St. Louis with the film's director of photography, Brian O'Connell, in the early fall of 2016. It only took one day at the school to set their course.

"We were speechless by the end of the day. We had never met people like this," Miller says. "There were so many stories to be told and we were just smitten with the idea." The film features accounts from students of what their lives in their previous homes were like. They range from having to walk hours just to get to school to having to leave their friends and life behind to flee violence and war.

The stories were still fresh in the students’ minds. Miller took precautions to tell their stories respectfully.

"This was kind of a delicate issue because the children were so traumatized and I did not want to make it worse for any of them," Miller says. 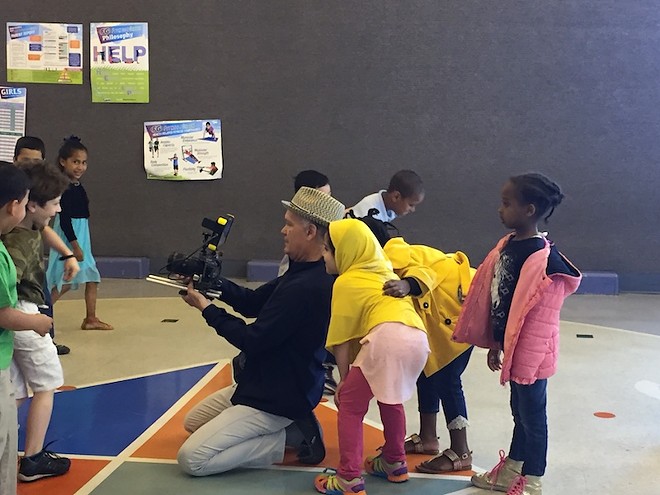 To prevent that, Miller worked closely with the school's educators, whom she calls “just the most inspirational people I've ever met." The teachers knew the children's backgrounds and life stories, so Miller would sit down with them and talk one-on-one or in groups to decide how to get the best and most diverse group of students for the film.

Miller’s initial vision featured fewer kids and would have gotten into their lives in more detail, but this changed during the time they spent filming. The film still features a wide variety of refugee and immigrant students who describe their time in their home countries, but the film mostly focuses on their lives in St. Louis and how the school and its faculty help them acclimate to a brand-new country after their childhood traumas. “By really focusing on the teachers, educators, school and community, the idea of this movie is how everyone who can get an education can contribute and have a good life,” Miller says.

When it came time to interview the students for the film, Miller found that they were confused as to why anyone would want them to describe their lives in their home countries.

"Because this is the life that they live and these things seem normal to them, I don't think they completely understood how fascinating and informative their stories were to other people," Miller says. "I would ask them about the schools they used to go to and they would look at me like, 'Who cares?' so then Bryan and I would work with them. They didn't think it was so unique."

Miller and her crew shot the film during President Donald Trump’s first year in office. While Miller had not planned on including a political aspect in her film, the timing made it nearly impossible to ignore.

“When President Trump was elected, there was so much fear, anxiety and difficulty in the community. It was hard to tell that story in that particular year without touching on the political aspect,” Miller says. "It wasn't about how I felt about politics, but rather how the political climate was affecting this community and what it was going to do to them.

While directing and producing a documentary is a daunting task, Miller doesn’t hesitate on the question of whether she’d do it again.

“[Both directing and producing] doubles the stress level, which is already high whenever you make a film,” Miller said. “Overall, it was wonderful and I hope to direct again in the future.”

In addition to the Day One premiere will taking place during the St. Louis International Film Festival, the film will also be shown at nearly a dozen schools in the St. Louis area through the “Cinema for Students” program provided by Cinema St. Louis, which also sponsors the film festival.

“My dream would be to show the film in as many schools as possible,” Miller says. Miller also plans on having a screening tour in early 2019 as well as small theatrical releases and advance screenings in other cities.

"We're hoping that with St. Louis watching at the festival, that will help it get some momentum going," Miller says.

The film screens November 3 at 7 p.m. in The Gathering. See www.cinemastlouis.org for ticketing details.

Editor's note: A previous version of this story gave incorrect information about Peter Tao's soccer field play structure construction. It was through Washington University and the Construction Forum STL, not Webster University. We regret the error.