The Best Things to Do in St. Louis This Week, October 4 to 10

It's hockey season again and everyone is invited. What's that? You don't like the sports? Understandable, and also not a deal breaker. This weekend also brings us the return of the Mr. Midwest Leather Contest, Open Studios STL and the Sheldon's new exhibition of photographs of immigrants. See you on the ice.

1. Hot Plate Comin' Through
The chef and food writer known only as Rossi has come a long way to get to the launch of her first book, The Raging Skillet: The True Life Story of Chef Rossi. Her "memoir with recipes" will debut at a combination book talk/cooking demonstration that will put the cherry on top of her arduous climb through the kitchens of NYC and also serve as a stick in the eye to all the chauvinist restaurateurs who told her she'd never make it. The only trouble comes when her mother crashes the party, which is quite a feat for a dead woman. Mom — who never approved of Rossi's lesbianism, her rejection of her Orthodox Jewish heritage for punk rock or her foul mouth — becomes the counterpoint to her big day in Jacques Lemarre's play about food and family, The Raging Skillet. Inspired by the true story of caterer Chef Rossi, the play opens the new season for the New Jewish Theatre, the first with new artistic director Edward Coffield. Performances are at 7:30 p.m. Wednesday and Thursday, 8 p.m. Saturday and 2 p.m. Sunday (October 4 to 21) at the Wool Studio Theatre at the Jewish Community Center (2 Millstone Campus Drive, Creve Coeur; www.newjewishtheatre.org). Tickets are $42 to $45. 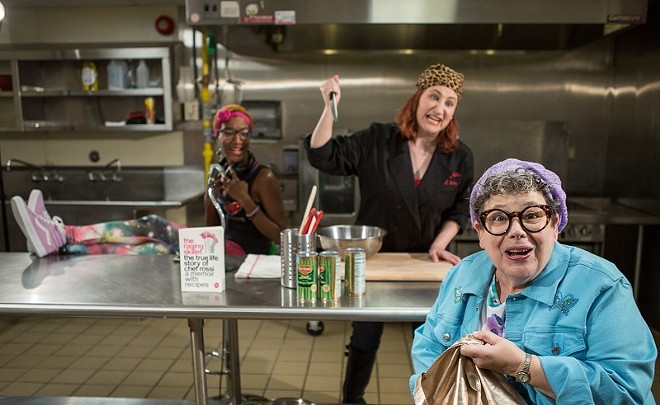 2. New in Town
America's long history of welcoming new arrivals to Team USA is celebrated in the exhibition The Immigrants: Works by Master Photographers. From the earliest days of photography in the 1890s, when Ellis Island clerk Augustus Frederick Sherman began documenting immigrants with his camera, to today, when Italian photographer Alex Majoli captures the crisis of refugees trying to survive the ocean crossing from Africa to Greece, the exhibit shows the people who fled their homes in search of safety. The Immigrants doesn't shy away from the worst moments; Dorothea Lange's suppressed photograph of Japanese Americans in a U.S. internment camp during World War II is part of the show, as are more ennobling images made by Lewis Hine and Bob Gruen. The Immigrants opens with a free reception from 5 to 7 p.m. Friday, October 5, at the Sheldon (3648 Washington Boulevard; www.thesheldon.org). The show remains up through January 12.

3. Drop that Puck
The St. Louis Blues and the Chicago Blackhawks both missed the NHL playoffs last year, forging another link in the chain of coincidences that binds the two teams in hatred. Fortunately, the Blues and the 'Hawks meet early in the season this year, so both teams can work on accumulating points early against an old foe. (And if the Blues can rack up wins late in the season as well, there won't be a repeat of last year's debacle.) The one-time Norris Division warriors hit the ice at 7 p.m. Saturday, October 6, at the Enterprise Center (1401 Clark Avenue; www.stlblues.com), with four points on the line and 50-plus years of honest dislike behind them. Tickets are $75 to $319.

4. Leather Daddies Unite
It's a leather kind of weekend, as the Mr. Midwest Leather Contest and the Midwest Puppy Contest will crown new titleholders on Saturday, October 6, at JJ's Clubhouse (3858 Market Street; www.mrmidwestleather.com). There are a host of social events for the community to join on Friday and Sunday, but if you're only in it to see fit men who look good in leather compete for the sash, Saturday is the main event. Doors open at 9 p.m. for a silent auction and raffle (plus some serious socializing), and the contest starts at 11 p.m. Potential winners will need to answer questions from the judges, wear their hottest outfit while being introduced to the audience, demonstrate their comfort by answering a single question while minimally dressed and deliver a 90-second speech in full leather. The new Mr. Midwest Leather will then represent the community to the best of his abilities, raise funds and awareness, and compete in the International Mr. Leather contest. Admission for spectators and supporters is $10.

5. Print it!
Just like books and records, letterpress printing is having something of a revival despite the onslaught of desktop publishing. Letterpress uses moveable type either carved into wood blocks or forged in steel, which is then placed in a locking form and inked. A roller powered by machinery or elbow grease then applies pressure, which stamps the impression into paper. It's the same labor-intensive process Johannes Gutenberg invented centuries ago to print the Bible.

Printmaker Marie Oberkirsch thinks the letterpress renaissance is a result of modern technology and old-fashioned nostalgia for a once-fading artform.

"I'm sure social media has helped the letterpress community," Oberkirsch says. "When a part breaks, you can contact other printers for help or a replacement, or watch a video that shows you how to repair it. I think there's a stronger community than there has been in the past because of it. A stronger print community spurs growth. It's tough to run a small print shop, so having a community helps."

The nostalgia kicks in when non-printers get their hands on a printed poster or card.

"I think people really appreciate the tactile quality of it," Oberkirsch surmises. "The oil-based inks are lustrous. There are impressions left in the paper, so it feels different than laser printing or other modern methods."

Oberkirsch is executive director of Central Print (2624 North 14th Street; www.stlprintweek.com, the nonprofit arts organization based in the city's Old North neighborhood that promotes letterpress through classes, workshops and hands-on demonstrations. To that end, Central Print, its neighboring shop Firecracker Press and trade organization the Ladies of Letterpress host STL Print Week, a series of seminars for beginners to advanced practitioners of the inky art, from October 4 to 7. The week culminates in the Print Market, an open-to-the-public show and sale of hand-printed material and supplies for the small printmaker.

The Print Market takes place from 11 a.m. to 4 p.m. Sunday, October 7, in a large tent set up behind Central Print. You'll be able to buy new hand-carved type crafted by Steve Moore of Moore Wood Type, plus old forged type — and learn tips and tricks from the pros.

6. Meet the Artist
Many artists are living and working throughout the metro area, and the annual Open Studios STL allows you to meet many of them in their studios and workspaces between 10 a.m. and 5 p.m. Saturday and Sunday (October 6 and 7). Saturday is devoted to artists who work east of Grand Boulevard, and Sunday is for those west of Grand. Maps of participating studios are available at Contemporary Art Museum St. Louis (3750 Washington Boulevard; www.camstl.org), and CAM also offers curator-led studio visits if you'd like some help breaking the ice. Sunday's participants include Metra Mitchell (3883 Hartford Street), whose oil paintings of people arranged in strangely lit spaces feature thickly applied paint to create a sense of texture. Justin Cissell (Phi Academy of Art, 4210 Chippewa Street) shows his fired clay sculptures and drawings of nudes and still lifes, while photographer Gena Brady (4032 Botanical Avenue) presents her photos of everyday life, which range from luridly hued dollar-store interiors to portraits of teenage girls peering into their cellphones while waiting on a bench. Open Studios STL is free.

7. Doctor Whom?
America may not believe in women physicians, but Great Britain certainly does. After some 50 years, science-fiction hero Doctor Who is finally a science-fiction heroine. Jodie Whittaker officially becomes the star of the series as the thirteenth Doctor in the season-opening episode October 7. If you don't have BBC America and do have some patience, you can see the epochal episode at 7:30 p.m. Wednesday, October 10, on the big screen at Marcus Wehrenberg Ronnies Cine (5320 South Lindbergh Boulevard; www.fathomevents.com). Or see it again, you superfan. It's a new era for the long-running show, which is slightly better than real life at times because the good guys win. Tickets are $12.50, and there are two behind-the-scenes short features (one about Whittaker, one about the director) included in the ticket price.