The Best Things to Do in St. Louis This Week, September 28 to October 3 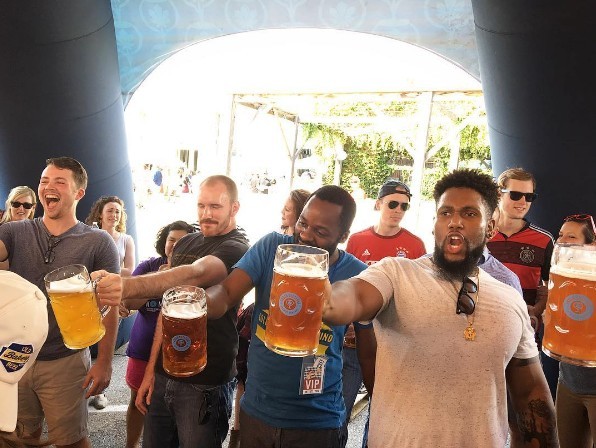 If multiple theater companies are launching new seasons simultaneously, it must be the last weekend in September. (Cross-checks the three calendars on desk .... It is.)

In addition to the theatrical delights this weekend brings the largest Oktoberfest seen in St. Louis in some time, the return of Strange Folk Festival and the strange case of Jeff "The Dude" Lebowski and Jeffery Lebowski (no relation). Let's all be little Lebowski Urban Achievers this weekend, just for the heck of it.

1. The Singing Dead
Gilbert and Sullivan's The Zombies of Penzance, or At Night Come the Flesh Eaters, never made it to stage during the duo's lifetimes. The musical was rejected by their publisher, so they reluctantly rewrote it as The Pirates of Penzance. The original was lost to history — until, that is, St. Louis-based theater impresario Scott Miller found a few sections of the original score and libretto. With composer Scott Gerdes, he has reconstructed a version of The Zombies of Penzance. Major-General Stanley is a retired zombie hunter, and when a coterie of zombies arrive in the neighborhood he forbids any of his many daughters from marrying even a single one. Is the old man going to be forced out of retirement and back into the head-crushing game? Find out when New Line Theatre presents The Zombies of Penzance. Shows are at 8 p.m. Thursday through Saturday (September 27 to October 20) at the Marcelle Theater (3310 Samuel Shepard Drive; www.newlinetheatre.org). Tickets are $20 to $30.

2. Dinner Is Served
For the protagonist of Sabrina Mahfouz's drama Chef, food is not just a passion, it's her entire being. She has no name other than "Chef" at this point, as she attempts to make the best possible meals for the diverse group sharing her cramped quarters. She dreams of the fine-dining restaurant she hopes to helm when she gets out of here. But how did someone with her skills end up in such dire circumstances? That is the story Chef tells you as she works, a tale of the violent men in her life and of bad decisions, all leading her to plying her trade here. Upstream Theater opens its fourteenth season with the one-woman show. Performances are at 8 p.m. Thursday through Saturday and 7 p.m. Sunday (September 28 to October 13) at the Kranzberg Arts Center (501 North Grand Boulevard; www.upstreamtheater.org). There's one matinee at 2 p.m. Sunday, October 14. Tickets are $25 to $35.

3. Synchronicity
How much do you know about what your parents do when you're not around? Beth is certain her mother Scottie is a homebody. Scottie's in her 70s and not as spry as she once was; where's she gonna go, Nepal? In fact, Scottie has been traveling around the world with paid companion Bernadette, a much younger woman who helps her when necessary. Meanwhile, Bernadette's sister Rhonda will soon meet Beth's brother Tim at work. All of these people are connected, or almost connected, just as they're connected to everyone they meet in some way. That's the nature of the world: it feels big, but it's jammed full of people who constantly and casually make contact with each other, if only to nod hello. Is it all chaos and sheer happenstance, or is the point of life to make those connections with people? Humans are social animals, but some are more so than others in Steven Dietz's This Random World. West End Players Guild opens its 108th season with the comedy about the might-have-beens and coincidences we call life. Performances are at 8 p.m. Thursday through Saturday and at 2 p.m. Sunday (September 28 to October 7) at the Union Avenue Christian Church (733 North Union Boulevard; www.westendplayers.org). Tickets are $20 to $25.

4. A Woman's Scorn
Regina Giddens is not accustomed to being rebuked or circumvented. It happened to her once when her father's fortune was divided between her two brothers Benjamin and Oscar, and she's not willing to suffer that indignity again. When those same brothers come to her in need of her browbeaten husband Horace's money to build a cotton mill, she agrees to their plot. But Horace refuses to give her the money, and then rejects Regina and the brothers' plan B — a marriage between Regina and Horace's daughter, Alexandra, and Oscar's son Leo. Horace and Alexandra think they've won, but underestimating Regina's ability to ruin any life can be a fatal mistake. St. Louis Actors' Studio opens its new season with Lillian Hellman's classic drama The Little Foxes. Performances are at 8 p.m. Thursday through Saturday and 3 p.m. Sunday (September 28 to October 14) at the Gaslight Theater (358 North Boyle Avenue; www.stlas.org). Tickets are $30 to $35.

5. Oans, Zwoa, Drei, G'suffa!
Urban Chestnut has hosted seven successful Oktoberfests, but this year's version will be the grandest one yet. Oktoberfest St. Louis runs three days, spanning Washington Avenue from Urban Chestnut's Midtown Brewery down to Circus Flora's newly permanent Big Top Tent. What's going to fill in all that real estate? Oh, people, beer, food, a festival market featuring a different roster of artists selling handmade items each day and even some circus performances. Best of all, admission is free; you simply pay cash for your food and beer as you go. (No credit cards are accepted, though ATMs will be available on the festival site.)

The party starts at noon on Friday, September 28. At 6 p.m., Ken and Nancy Kranzberg tap the ceremonial keg, and the fun doesn't stop until midnight. For the beer drinkers, Urban Chestnut will offer Oachkatzlschwoaf Lager, Zwickel Bavarian Lager, Schnickelfritz Bavarian Weissbier and a special-edition Dunkel based on the 1967 recipe UCBC brewmaster Florian Kuplent learned while serving his apprenticeship at Brauerei Erharting.

The fest continues from 11 a.m. to midnight Saturday, September 29, and includes the popular stein-holding competition, or Masskrugstemmen, if you're traditional. If you want the true Oktoberfest experience, reserve a VIP table under the Big Top Tent. You'll received a commemorative one-liter stein with one free fill-up of beer and a dedicated beer server assigned to your table so you can enjoy performances by Sean Canan, Marquise Knox and Al Holliday and the East Side Band.

Sunday, September 30, is for families, with Circus Flora performers including roaming clowns, jugglers and stilt-walkers. A dedicated children's tent will offer games, cookie decorating and activities for you and your dog under the supervision of Purina pet-care experts. The fest opens at 11 a.m. and closes at 7 p.m. on Sunday.

6. Strange Goings-on
If you feel something unusual in the air this weekend, don't panic. It's only the Strange Folk Festival unfolding and transforming itself into a living thing in Carondelet Park (Leona Avenue and Holly Hills Boulevard; www.strangefolkfestival.com). The theme this year is Wanderlove, and the fest showcases more than 100 artists and craftspeople selling their handmade goods and live music from Cherokee Moon, Dutch Courage and Hosteen and the Aztechs, among others. There will be crafters working on the sward and perhaps up in the trees, a special Craft Time Tent where you can try your hand at making something of your own, yard games and other diversions. Dogs, drones, picnickers and shade tents are all allowed, so make yourself comfy. Food will be sold on site by Urban Eats Cafe, the Stellar Hog and others, while Craft Beer Cellar and the Wandering Side Car Bar Co. handle the adult beverages. Strange Folk Festival takes place from 3 to 7 p.m. Friday, 10 a.m. to 7 p.m. Saturday and 10 a.m. to 4 p.m. Sunday (September 28 to 30), and admission is free.

7. Spy in the House of Hate
Dietrich Bonhoeffer practiced what he preached. The Lutheran pastor spoke out against the rise of the Nazi party with sermons that denounced the growing cult around Hitler. This did him no favors in 1930s Germany, and his refusal to sit quietly while Jewish citizens were terrorized and then actively denounced by his church got him in even hotter water with his own archbishop. Bonhoeffer remained undaunted, and joined the breakaway Lutheran church that preserved the traditional Christian beliefs — a huge risk that resulted in him being declared an enemy of the state. Forced to go into hiding, Bonhoeffer continued to preach the true gospel as an act of love and resistance. And if the resistance required martyrdom, so be it. St. Louis illustrator and author John Hendrix depicts the story of Dietrich Bonhoeffer in his new book for young readers, The Faithful Spy. Hendrix reads from and signs the book at 6 p.m. Monday, October 1, at the University City Public Library (6710 Delmar Boulevard, University City; www.subbooks.com). Admission is free, and copies of The Faithful Spy will be sold on site by Subterranean Books.

8. You Want A Toe?
Joel and Ethan Coen gave the world a magnificent gift when they released their modern noir bowling adventure The Big Lebowski — but the world failed to accept it, at least at first. Denser and yet more wide-open in structure than its predecessor, Fargo, Lebowski is the sort of film that goes right over your head the first time you see it. The more times you watch it, the more you glean. This mystery about a kidnapped woman whose husband is the insanely wealthy Jeffrey Lebowski turns on the fact that the kidnappers approach Jeff "Dude" Lebowski for the ransom and the Dude is a hard-core, Zen-hippie, bowling guru. The Big Lebowski is the shaggiest shaggy dog story of all time, and it also has one of the most devoted cult followings. It's only right and natural that the Strange Brew film series would present a screening of it — it's part of their ethos, Dude. The film starts at 8 p.m. Wednesday, October 3, at the Urban Chestnut Grove Brewery (4465 Manchester Avenue; www.webster.edu/film-series). Admission is $5.