Gateway Arch Will Go Dark for the Birds, Beginning Monday 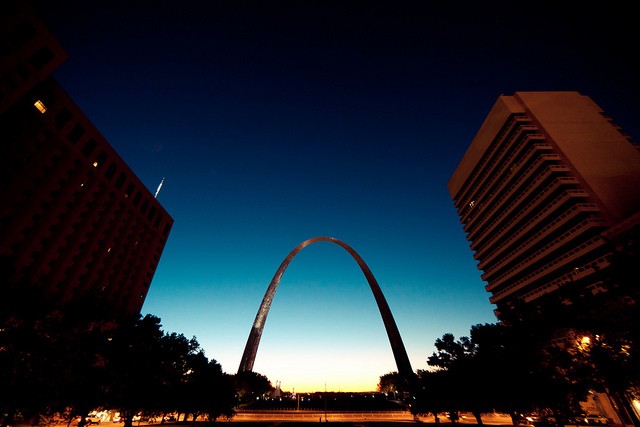 You may notice downtown St. Louis is looking a bit darker beginning Monday — and it's not just because (shudder) winter is coming. Instead, they're turning out the lights on the Gateway Arch.

The reason? The onset of fall means it's migratory bird season in St. Louis. And for the last seventeen years, the National Parks Service has done our feathered friends the favor of dimming the Arch lights during their most popular weeks of travel. That's the last two weeks of September and the first two weeks of May for fall and spring migration, respectively, according to Frank Mares, deputy superintendent of Gateway Arch National Park.

“The end of September is the peak migration period for birds migrating south for the winter,” Mares says in a press release. “In order to avoid the possible disorienting effect of the monument’s upward lighting on birds that migrate at night, the Gateway Arch’s exterior lights will be turned off for the last two weeks of September.”

The Arch goes dark on Monday, September 17, and should resume its normal illumination on October 1. At that point, the lights go on at 7 p.m. nightly. (And, for the record, those are new-and-improved lights: 44 outdated fixtures were recently replaced with 26 new-fangled ones, which better focus light on the Arch's legs and also increase energy efficiency.)

As for the dark and drear that once again awaits us, well, we're not quite sure when that will actually set in. But we can report that, yes, winter is coming. Lucky birds to get out while they still can!