The Best Things to Do in St. Louis This Week, September 7 to 12 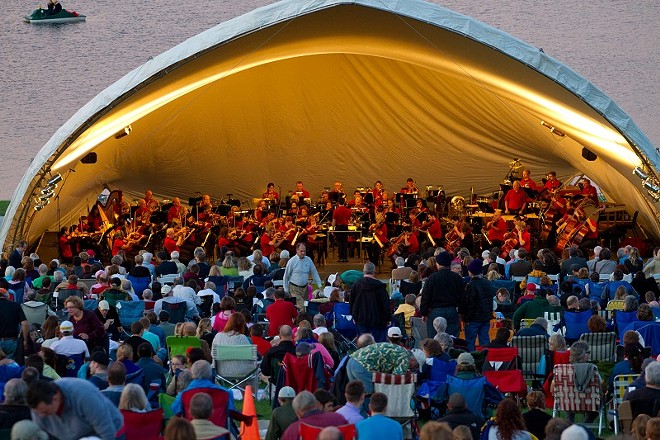 So LouFest is canceled — now what? If you were all geared up to enjoy live music this weekend, your best bet is to check out our roster of hastily-scheduled replacement shows and find something to suit your fancy (we're also hearing good things about Pu Fest). If you're more looking for fun that goes behind just music, read on. This weekend is packed with some big art exhibits, a number of local theater companies' season openers and motorcycles.

1. Black Art, Then and Now
The Contemporary Art Museum St. Louis opens some of the most ambitious and vital shows in its history this month, with a series of exhibitions by, and about, black artists and the black experience. Sanford Biggers works directly with the materials of his forebearers — quilts and African sculptures — only he reshapes and repurposes them as contemporary statements about black identity, history and trauma. Biggers gives found quilts new life with new handwork, encoding personal messages into their original pattern. The fact that the work of an anonymous black craftsman or woman now appears in galleries and museums around the world, even in Biggers' modified form, is both subversive and celebratory. With wooden sculptures, some of which are copies, he dips them in wax and then works them over with firearms. What begins as a statue of a human or human-shaped supernatural being becomes obscured, disfigured and unrecognizable through the violence wrought upon it. 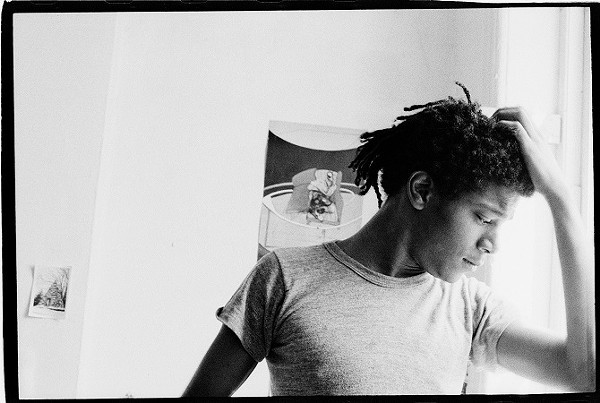 In addition to Biggers' work, CAM presents a show of the private photos of Jean-Michel Basquiat. Basquiat emerged from the New York City hip-hop/punk/graffiti scenes in the 1970s as one-half of the graffiti duo SAMO, along with Al Diaz. The pair together tagged buildings with cryptic phrases denouncing the establishment, politics and religion, always signed "SAMO" (an acronym for "Same Old Shit"). When the duo broke up, Basquiat performed in the noise rock band Test Pattern (later named "Gray") with Vincent Gallo and Michael Holman. He lived on the streets, sold drugs and experimented with Xerox art, painting and drawing. Basquiat Before Basquiat: East 12th Street, 1979-1980 will showcase everything the artist made while living in a small East Village apartment with his friend Alexis Adler before he hit the big time. It's a treasure trove of paintings, sculptures and works on paper, as well as Adler's photographs of his friend.

2. Put a Hat On
Yolanda's older brother has just been slain on the streets of Brooklyn by a random act of violence. Before she can fully process the murder, her mother ships her off to family in South Carolina in hopes of saving at least one child. The transition is jarring, to say the least. Yolanda doesn't understand country living or the culture of the South, and she certainly doesn't understand her relatives' fascination with hats. But for this older, more religious generation, chapeaus are both a sartorial expression of style and grace and an absolute necessity if you're going to church — and you are going to church. As Yolanda begins to know her relatives — especially her grandmother, Mother Shaw — she learns about dressing well, history and her own culture. And with that knowledge comes the realization that you earn as much pride as you give yourself. The Black Rep throws open the doors on its 42nd season with Regina Taylor's play Crowns. Performances take place at 7 p.m. Thursday, 8 p.m. Friday and Saturday and 3 p.m. Sunday (September 7 to 23) at Washington University's Edison Theatre (6445 Forsyth Boulevard; www.theblackrep.org). Tickets are $15 to $45, and now more than ever, dress to impress on opening night.

3. You Must Love Her
The Repertory Theatre St. Louis opens its new season with a bang — the Andrew Lloyd Webber and Tim Rice musical, Evita. It's the incredible, somewhat true story about the meteoric rise of Eva Duarte and her even swifter fall. Born into poverty, Eva pursued a career in show biz and rose above her humble beginnings, but a chance meeting with general Juan Perón altered the direction of her life. When Perón is elected president of Argentina, Eva chooses to help the poor, becoming a folk hero and cultural icon. The Repertory Theatre St. Louis presents Evita Tuesday through Sunday (September 7 to 30) at the Loretto-Hilton Center (130 Edgar Road; www.repstl.org). Tickets are $29 to $102.

4. Motorcycle Marvels
Now in its fifth year, the Cycle Showcase STL returns to celebrate the art of the motorcyle. More than 50 hand-built bikes will be displayed from 11 a.m. to 5 p.m. Saturday and Sunday (September 8 and 9) at 3300 Washington Avenue (www.cycleshowcase.stl.com). The cycles are chosen both for their aesthetic appeal and historical significance, and have been loaned by museums and private collectors. In addition to the vehicles themselves, motorcycle-themed artworks will be displayed in a gallery-like atmosphere. Admission is $10 (free for kids 12 and younger), and if you're feeling fired up to ride after seeing all the bikes, a charity ride for the Aidan Jack Seeger Foundation takes place Sunday morning. Registration for that begins at 9:30 a.m. on the day of the ride.

5. It's OK
It's been 75 years since Rodgers and Hammerstein transformed the Broadway musical with Oklahoma!, and the show remains as fresh and popular as ever. Farm girl Laurey Williams has two suitors — cowboy Curly and farmhand Jud Fry. When Curly waits too long to approach her, she agrees to go to the dance with Jud. He's the type of broody loner who brings a knife to the social, just in case he gets a crack at Curly, but all Curly wants is to convince Laurey he's ready to get serious. Can true love win? The show is packed with songs that have long been considered classics, from show opener "Oh, What a Beautiful Mornin'" to the frequently covered "People Will Say We're in Love." And then there's the boisterous title number, which is so irresistible that within a decade it became the state song of Oklahoma. Stages St. Louis presents Oklahoma! Tuesday through Sunday (September 7 to October 7) at the Robert G. Reim Theatre (111 South Geyer Avenue; www.stagesstlouis.org). Tickets are $41 to $63.

6. Avast, Pirates
The St. Louis Cardinals are surging, and what seemed like another lost season is now an all-out assault on the Central Division's wild card slot, if not a first-place finish. What happened? Mike Shildt happened. Since taking over for ol' whatshisname, Shildt has the Cardinals playing disciplined baseball, with timely hitting and solid pitching. The Cards host a three-game set against Pittsburgh Pirates, a team that's scuffling around the .500 mark. Games start at 7:15 p.m. Monday and Tuesday and 12:15 p.m. Wednesday (September 10 to 12) at Busch Stadium (700 Clark Avenue; www.stlcardinals.com). Tickets are $5.90 to $250.90.

7. Symphonic Sneak Peak
The St. Louis Symphony is on the precipice of a new season, but if you've been paying attention you know what needs to happen first: the annual free concert in Forest Park, now in its 50th year. Conductor Gemma New will lead the orchestra through a greatest hits program of classical works, from "The Star-Spangled Banner" to Wagner's "Ride of the Valkyries," with excursions into the popular music catalog in the form of The Sound of Music and a couple John Williams' hits. The show starts at 7 p.m. Wednesday, September 12, at the bottom of Art Hill in Forest Park (www.slso.org). Admission is free, and following the concert is a display of fireworks.

8. Forgotten Father
Politicians and pundits beat us over the head with the idea of America's "Founding Fathers." We're told that these men believed in a certain version of America — a country that demands fealty to God, guns and white men and has no room for anyone or anything else. Don't believe it. Benjamin Rush, who signed the Declaration of Independence and helped forge our nation, would find those ironclad ideas unconscionable. Rush was a physician who wanted to create a form of national healthcare and revolutionized the treatment of the mentally ill. The good doctor believed both slavery and capital punishment were morally wrong, as was any sort of discrimination based on gender, religion or race. Now there's a Founding Father to believe in. Author and journalist Stephen Fried has used unpublished documents to craft a biography of this mostly unknown early patriot, whom contemporaries called "the American Hippocrates." Fried discusses his new book Rush at 7 p.m. Wednesday, September 12, at St. Louis County Library Headquarters (1640 South Lindbergh Boulevard, Frontenac; www.slcl.org). Admission is free.