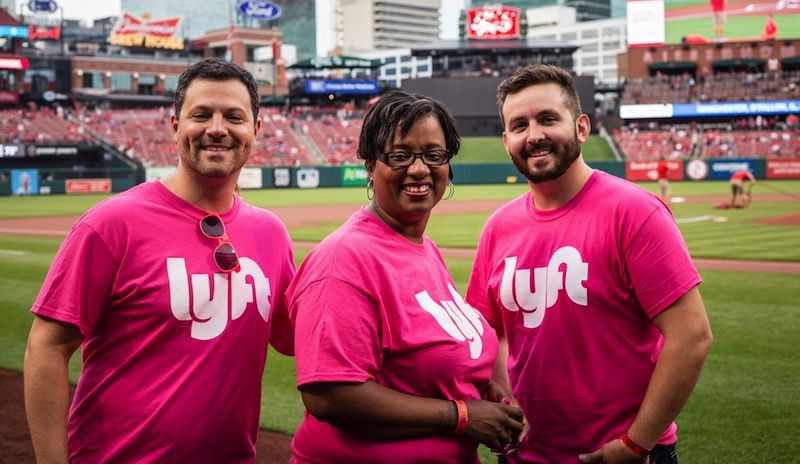 Lyft, the ride-sharing service that used to decorate its cars with those cheerful pink mustaches, this morning announced its new partnership with Chaifetz Arena. Going forward, if you catch a Saint Louis University basketball game or a concert at the Midtown venue, a specially designated area will let you meet up with your Lyft driver much faster than if you'd summoned that other ride-sharing service.

The Saint Louis University arrangements is one of many Lyft has inked in St. Louis since setting up shop here in April 2017. The company scored prestigious partnerships with the Blues last season and the Cardinals this season, as well as PrideFest and Citizens for Modern Transit.

Lyft Market Manager Joe Schlichter says those partnerships are a major strategic focus. A St. Louis native, he moved back home after stints in Atlanta, New York City, Chicago and Nashville to promote Lyft's interests here and forge new opportunities. "Now that we have boots on the ground, we're actively getting more and more involved in the community," he says.

Lyft's entrance to the market came many months after ridesharing rival Uber, which started operating in St. Louis in September 2015 after slapping the area's Metropolitan Taxicab Commission with an anti-trust lawsuit. It took years for the suit to be resolved, but Uber operated in defiance of regulators in the mean time. And Lyft — which very, very briefly attempted a similar maneuver in 2014 before a judge ordered its app to be disabled — wasn't willing to take that risk again. It waited until the state created a legal framework for ridesharing before picking up passengers again. That meant almost two years of standing by while St. Louis got in the Uber habit.

But Schlichter says Lyft is making up for lost time. "We've got tens of thousands of riders every week," he says, while declining to be more specific. "We've seen a growth in rides that's been 100 percent from six months ago to today." That's meant, he boasts, $15 million in revenue for local drivers in Lyft's sixteen months of St. Louis operations.

Indeed, to hear him tell it, the competition is less Uber (whose name he's careful not to mention at all) than people's personal vehicles. "Of course we want to be No. 1," he says. "But the bigger opportunity is to get folks out of their cars." The company would like to see people shift from owning cars — something, he notes, that costs an average of $9,000 a year — to hailing them when they need them.

Schlichter believes Lyft is starting to change how people feel about transportation — and not just city dwellers. He tells of a regular customer in St. Peters who now relies on Lyft to get to and from wine-fueled dinners with his wife — as well as the startling statistic that Lyft alone handled 5,000 rides to and from the PGA tournament earlier this month. "If you're downtown, it may be a minute or two quicker, but we do serve the suburbs, and we have a lot of riders there," he says.

And now some of them may be headed to — or from — Chaifetz Arena. Lyft may be the second ride-sharing service to have entered the St. Louis market, but it hopes you're now thinking of it as essential.