The Best Things to Do in St. Louis This Week, August 2 to 8

Nobody panic, but there's only 145 days until Christmas. Can you taste that sweet, sweet break from work? But before we get to that, it's a week of strangeness and novelty. We have David Lynch's first film to watch, the Coen brothers' magnum bowlum, an infrequently-produced musical and a medieval tale retold for the modern era.

1. Things get weird.
David Lynch's first feature film, Eraserhead, has puzzled audiences and given them the heebie-jeebies since 1977. Its abrasive soundtrack, repellent visuals and dream-like pacing defies easy categorization. Jack Nance plays Henry Spencer, an alienated man wandering through an industrial world. He communicates with a strange being called "the Man in the Planet," receives visitations from a lady in the radiator and has a severely mutated child with his girlfriend, Mary X. When Mary leaves him, matters become even more nightmarish. The Tivoli's Reel Late film series screens the disturbing film at 11:55 p.m. Friday and Saturday (August 3 and 4) at the Landmark Tivoli Theatre (6350 Delmar Boulevard, University City; www.landmarktheatres.com). Tickets are $8.

2. Concerning the qualities of love, stolen love and bandits.
The Natchez Trace was a notoriously dangerous proto-highway in early American history. Stretching through the forests between Tennessee and Mississippi, the Trace was the perfect place for highwaymen to waylay travelers and traders. One of the best-known highwaymen was the Bandit of the Woods, who's out hunting for Clement Musgrove, the richest planter in Natchez. Instead the bandit encounters the beautiful Rosamund, Clement's only daughter. And it's a good thing he does; the far more unsavory bandit Little Harp is out looking for women to accost, even as Rosamund's stepmother has spitefully hired the village idiot, Goat, to find and kill her as well. Is it any wonder Rosamund falls for the dashing Bandit of the Woods? The Alfred Uhry and Robert Waldman musical The Robber Bridegroom is a Southern fairy tale based on the novel of the same name by Eudora Welty. Stray Dog Theatre closes its fifteenth season with the bluegrass-tinged musical. Performances are at 8 p.m. Thursday through Saturday (August 2 to 18) at the Tower Grove Abbey (2336 Tennessee Avenue; www.straydogtheatre.org). There are additional shows at 2 p.m. Sunday, August 12, and 8 p.m. Wednesday, August 15. Tickets are $25 to $30. 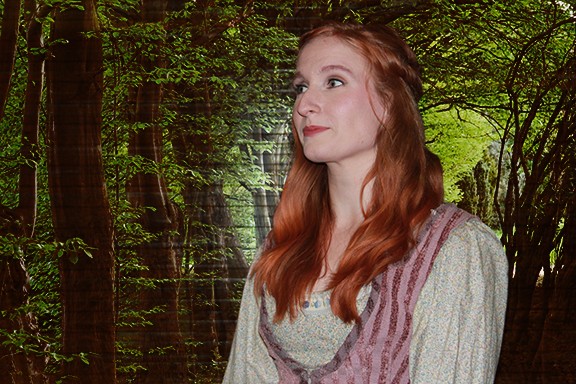 3. Enjoy your five-a-day and then some.
St. Louis has a host of food festivals that celebrate barbecue and grilled meats, but for the first time ever, it's playing host to a fully vegan festival for the cruelty-free set. St. Louis Veg Fest takes place from 11 a.m. to 8 p.m. Saturday, August 4, at the World's Fair Pavilion in Forest Park (www.start4animals.org/vegfest18), and it will be packed with vegan vendors. Indian Sunshine Cuisine, Frida's, Confluence Kombucha and many more will sell food and beverages, STL Veg Girl will conduct cooking demos at 11 a.m., noon and 1 p.m., and a slew of guest speakers will discuss topics ranging from "How to Eat Vegan on $4 a Day" to "Eating Vegan for Maximal Strength." Admission is free, but bring cash with you — not all vendors will have card-readers.

4. You laugh, those in need don't starve. It's a good deal.
Aparna Nancherla has been called a "comic you should know," one of the "most innovative comics working today" and one of the “ten funniest women in New York." That's a lot of pressure for someone who considers herself "Netflix's best employee" because she works from home and is never not watching. Nancherla performs at the Pageant (6161 Delmar Boulevard; www.thepageant.com) at 8 p.m. Saturday, August 4, as a benefit for the St. Louis Area Foodbank called "Hunger is No Joke." Local comedians Angela Smith and Kenny Kinds open the show. Tickets are $30.

5. What the?! Look, a trolley!
The Muny's celebratory centennial season comes to a fitting end with the only show it could: Meet Me in St. Louis. Set in 1904 during the World's Fair, it follows the lives of the Smith family in a year of great personal change. A son prepares to leave for college, daughters Esther and Rose tentatively enter into the world of romance and the greatest possible tragedy that can happen to a St. Louis family looms in the distance: a possible move to New York City. Only the glorious sound of a trolley's bell can save them now. The Muny in Forest Park (www.muny.org) brings down the curtain on its first 100 years with the Hugh Martin, Ralph Blane and Hugh Wheeler stage adaptation of the Judy Garland film at 8:15 p.m. Saturday through Sunday (August 4 to 12). Tickets are $15 to $100.

6. Obviously, you're not a golfer.
The Coen Brothers' follow-up to the Academy Award-winning Fargo made very little impact when it appeared in theaters. Somehow, late-'90s America wasn't ready for a shaggy dog story about a hippie who shares a last name with a rich guy, the theft of a rug and the joys of bowling. Twenty years later, The Big Lebowski is rightfully regarded as a classic. It just took us a while to catch up to what bowling aficionado "The Dude" (Jeff Bridges) was laying down. The only debate now revolves around the most quotable character in the film: Is it John Goodman's love-sick soldier-of-misfortune Walter Sobchak, Jeff Bridges' zen bowler, Julianne Moore's affected artist Maude or Sam Elliott's easy-going Stranger? (A lone vote goes out to Jon Polito's star-struck private detective, Da Fino, for his love of a "brother shamus.") Turner Classic Movies brings The Big Lebowski back to the big screen with a couple of new special features that explore the film's nooks and crannies. It's shown locally at 2 p.m. Sunday and 7 p.m. Wednesday (August 5 and 8) at Marcus Wehrenberg Ronnies Cine (5320 South Lindbergh Boulevard; www.fathomevents.com). Tickets are $12.50.

7. The Devil didn't make him do it; the Devil merely present an opportunity.
A coalition of five St. Louis theater companies join forces to present a celebration of the Faust legend this summer and autumn. The Faustival opens with ERA's experimental rock-opera Faust: go down with all the re$t, which is inspired by Goethe's rendition of the story. Faust is God's favorite human, but the Devil bets that he can draw him into sin. And so the Devil appears to Faust as a poodle and corrupts him with the promise of absolute power. ERA, with the help of local band Kid Scientist, presents its "capitalist tragedy" Faust: go down with all the re$t at 7:30 p.m. Wednesday, Friday and Saturday (August 8, 10 and 11), and then again at 7:30 p.m. Wednesday through Saturday (August 15 to 18) at Foam (3359 South Jefferson Avenue; www.eratheatre.org). Tickets are $10 and a two-drink minimum is recommended to get in the proper mindset.