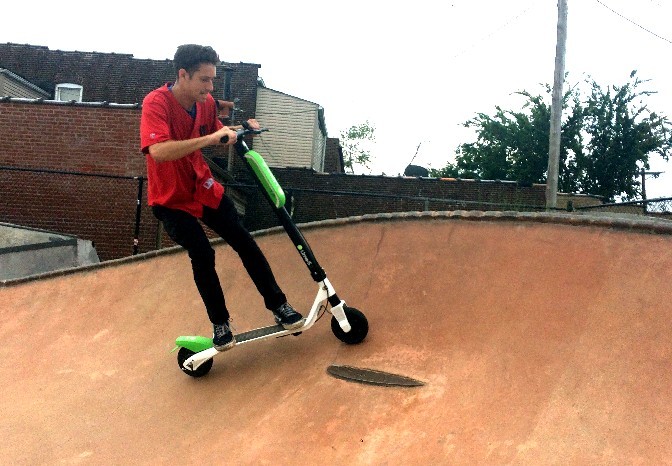 Lime, the company behind those ubiquitous highlighter-green rideshare bikes blanketing the St. Louis area since April, unceremoniously dumped a whole bunch of electric scooters onto the city's streets this past Friday, aiming to serve the St. Louisan who has places to be but is far too fat and out of shape to pedal anywhere.

I am one such St. Louisan, and therefore I decided to take it upon myself to run extensive tests on the new rides, for the good of the people. Over the course of two rather temperate St. Louis days I managed to ride no less than eight of the little buggers, so as to have a large enough sample set for accurate scientific research.


Here are my findings. 1. Locating One Is a Fucking Bloodsport.

For its launch, Lime brought 200 scooters to the St. Louis area. Since St. Louis City proper still has, like, at least 250 people living in it, this makes for some competition to get your hands on one of the little electric toys.

I secured my first scooter at 7 a.m. on Saturday morning, where it was parked neatly with three others outside the Parkway Hotel. This appears to be the only time of day you can reasonably expect to get your hands on one with little effort. I transported it in the back of my car to a research site near my home for testing. (Note: Make sure you unlock your scooter with the Lime app before trying to move it anywhere — in a car or otherwise — or else a female robotic voice will start yelling at you from the bike's frame that she's going to call the cops.)

After getting the hang of riding at a secure location, I decided first to take the scooter to the Delmar Loop. I parked it outside United Provisions while I stopped to get a drink, and within only two minutes or so vultures were already circling, cell phones in hand. I was barely able to get back to it in time, or else I'd have been left stranded. Throughout my two days of testing I had one scooter I was seconds from riding snatched up just as I approached, and another I'd just been using taken while I sat with my head down a mere two feet away.

In other words, if you somehow do secure one, don't let your scooter out of your sight for even a second, or else it is gone.

2. These Things Are Moderately Terrifying.

Lime explicitly instructs you to stay off the sidewalks and instead ride on city streets, which can be nerve-wracking considering the scooters' average speed is only about 15 mph (though with the assistance of a rather large hill I was able to hit a top speed of 29.3 mph at one point). It feels much like riding an oversized Razor scooter on the street among a bunch of vehicles that weigh thousands of pounds and could easily kill you. Lime suggests you wear a helmet while riding, but they don't provide the helmet, which means if you're like me, you're not gonna wear a helmet.

Over the course of two days I had to bail twice, went flying over the handlebars once (didn't see that hole in the ground) and straight laid it down and slid across the pavement once (avoid multi-tasking with your hands while riding, even if you're thirsty). Be prepared for road rash.

This is a good thing, considering the hilarious disrepair of St. Louis' cratered roadways. You will soon be a pro at hopping over potholes on a scooter (or else you too will fly over some handlebars).

4. No Burnouts, But You Can Kick Up Gravel With 'Em.

5. Everyone Will Stare at You.

And mostly with disgust. People in cars are angry with you for holding up traffic; people on bicycles are angry with you for taking up space in the bike lane. In the Loop, I actually had a man boo me, from across the street. "Boooo!" he yelled. He looked me dead in the eyes, too, and then repeated it, his stare unblinking. "BOOOO!" These things have quite the reputation for being hated in the cities in which they've so far been rolled out; St. Louis will, predictably, be no different. 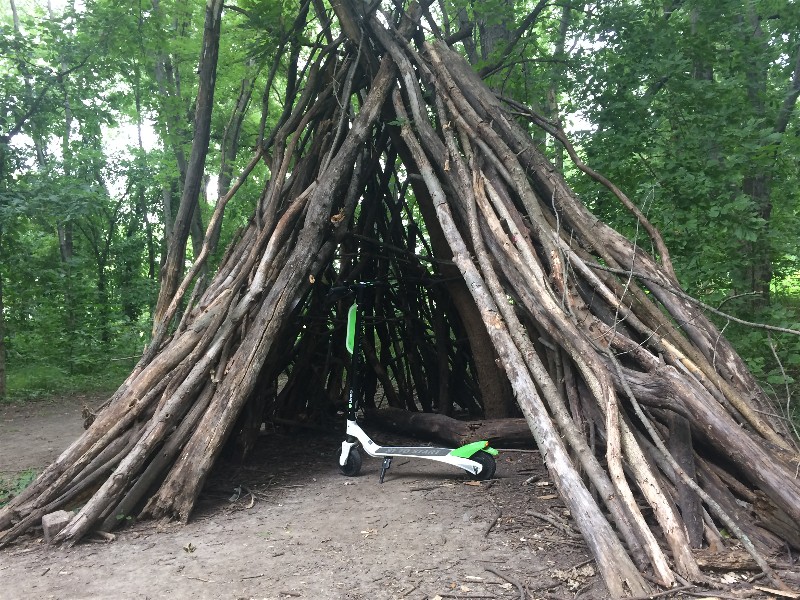 Two of the scooters I found had been stashed in various backyards in University City; one was even deliberately obscured by leaves. People will try to hoard and hide these things for their own later use, but you can push a "ring" button in the Lime app that makes them loudly announce their location.

I also found one thrown in some bushes near Delmar and North Kingshighway. When I was finished with it I left it in a primitive dwelling I found in the woods of Forest Park. Hopefully the teepee's inhabitant has the Lime app.

This is especially true in the rain, but regardless, if you lock those brakes, you're gonna start sliding. Whether you look cool doing it depends on how much you've practiced, so get out there and get after it, sport. 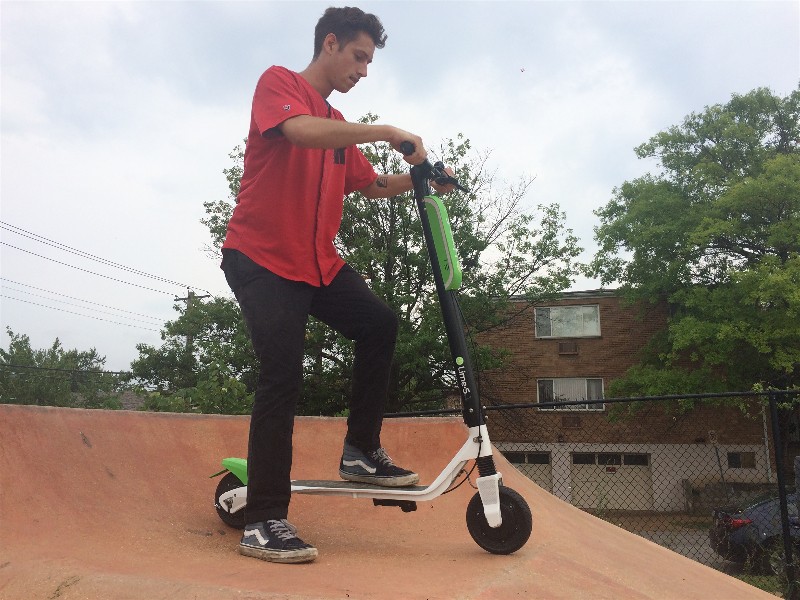 A skate park seems like one of the more hilarious places to bring an electric scooter that you don't own, and so of course I took one down to the Peter Mathews Memorial Skate Garden in Bevo Mill to see what fun the skateboarders there might have with it. I soon found a young man who goes by "Fridge" who was game to test the scooter out on the ramps. After a little trial and error he was soon riding it effortlessly up embankments and across the course. I left that scooter there in the hopes that some of those guys get really good at it and come up with some sick tricks. Fingers crossed.

[NOTE: After publishing this story, we heard from several volunteers at the park that wanted us to make clear that the park is for skateboards only, no scooters. We ran our test, with permission from a volunteer who was on-site, just for grins. Don't be like us.]

9. At Last, We Have a Way to Experience St. Louis' Bike Trails Without Collapsing From Exhaustion.

I'd heard for years that the bike trails in Forest Park are gorgeous and fun to ride, but I had no firsthand knowledge of this, because I'm a big fat sweaty man ill-equipped for physical exercise of any kind. But thanks to these Lime scooters, I can now confirm that the rumors are true! Lime encourages customers to take the scooters out onto bike trails, and honestly, this is probably their best possible use.

10. Remember to Shut Them Down When You Are Done.

In the midst of a rainstorm, I spotted two scooters in Soulard that were parked in the middle of the street and not appearing on the Lime app's GPS map. Upon closer inspection, I realized they both had been left unlocked by the people who had been riding them — you have to push a button within the app to end your ride, which they did not. It appeared as though these people abandoned their rides when the rain picked up and simply forgot to turn them off.

I waited a while for them to turn up, and even poked my head in the nearby businesses to see if anyone was around to claim them, but when that proved fruitless I decided they were abandoned and threw both scooters in the back of a hatchback to take elsewhere for more study. Since they were already unlocked I didn't have to deal with that robot voice screaming at me about the police. There's no way a single person could transport two scooters with only one cell phone other than by the previous riders' neglect, and there's also no way to lock the bike for someone else if they errantly forgot to do so themselves, so this seemed the best option.

About an hour later one of the scooters was finally locked by whoever in Soulard had left it on. The other one's battery died before anyone ever locked it. Seeing that Lime charges 15 cents every minute that a scooter is unlocked, it would be wise not to forget to shut yours down when you finish riding.

11. Your Bank Might Not Know What's Happening And Panic.

Twice over the course of the weekend my bank suspended the use of my debit card, thinking it had been stolen because there were suddenly dozens of payments to Lime. Maybe be prepared to talk to some customer service representatives.

Sometimes those people are kindly Lime employees with names like Marcus Wolff who notice via GPS that you have a bunch of scooters you've been doing research on parked directly in front of your home for some reason. Sometimes it's a would-be customer who comes upon your cache, but who is unaware that the one with the really full charge is hidden on your porch (sucker!). Regardless, it would probably be a good idea for anyone running a struggling business to drag a whole bunch of scooters to their front door and just wait. People will come.

Though as time goes on they will surely raise the ire of motorists and bicyclists and pedestrians and everyone who ever eats shit while riding one and probably a lot of other people as well, there is no denying that these scooters are an absolute blast to ride. They're user-friendly and reasonably effortless, and they take you to parts of the city you might not normally go, if only because you're trying to track down their location, app in hand. They are head-turners, so you're bound to meet new people, full of questions.

Over the course of a weekend I spent time in north county, north city, the Central West End, Soulard, the Delmar Loop, Forest Park, Bevo Mill and Tower Grove. I met a man with a German accent who wanted to take my scooter for a ride, a man with an accent I couldn't place who just wanted to know where they came from, and even a rather talkative if sketchy looking fellow whom I'm pretty sure was trying to figure out if it was possible to break the GPS off one and steal it.

In the Central West End, just after I'd picked up a scooter parked outside Jet's Pizza, I came across a man named Derek, whose dog, Princess, was playing in the fountain in front of Maryland Plaza. Her game seemed to be one called "Eat the Water," and she was splashing all about looking happy as can be as she attempted to get her mouth over the jets while the fountain was in action.

As I watched her play, I couldn't help but think that the look of happiness on her face matched my own as I rode around on my little scooter.

In other words, if you're looking for a dog-playing-in-a-fountain level good time, Lime's new scooters have got you covered. Just don't forget to shut them down once you're ready to return to the drudgery of your real life.