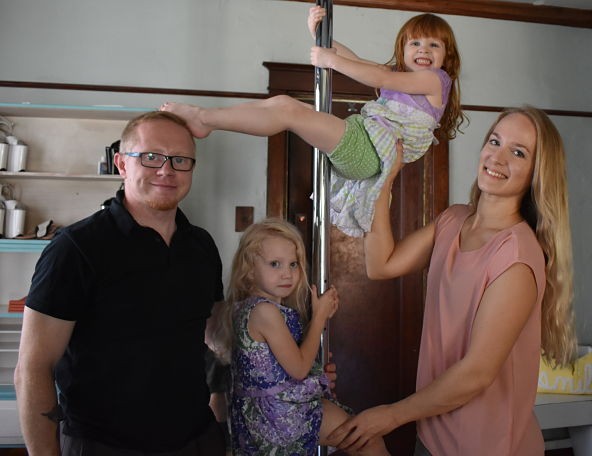 The family that pole-dances together, stays together.

At least that's the line of thinking for married couple Lindsey Teall and Jake Night, who have taught their young daughters, five-year-old Laura and three-year-old Roslyn, how to properly hang and spin on a vertical metal rod, pearl-clutching reactionaries and reciters of classic Chris Rock bits be damned.

In recent weeks the young family has seen a deluge of press for their unorthodox approach to family bonding, with coverage from outlets including Daily Mail, Yahoo Lifestyle, the Sun and NBC. With that attention has come a significant amount of hate mail from critics, who say that young people should not be going anywhere near a pole.

Just try telling that to young Roslyn though.

During a recent interview in the family's south-city home, the little girl is all smiles at the arrival of a reporter, eager to show off some tricks. She runs to the pole the family has mounted in one of their front rooms, beaming and shouting "watch this!" as her parents look on. Her older sister Laura joins in on the fun as well, and without prompting the two are soon taking turns spinning in circles around the chrome pole.

"It seems like a lot of families aren't spending time with their children," Teall, 33, says of the unusual piece of decor. "This allows us to spend time with our kids in a way they're having fun. And it doesn't cost anything."

Teall has been pole-dancing for eleven years. She currently works part-time as an exotic dancer on the Eastside. Night, 37, is himself a former exotic dancer and currently a security supervisor for a local company. He and Teall met at a club in DeSoto in 2010.

You might think that the pair's love of pole-dancing was born in that club, but that would be missing part of the story. Teall is actually a classically trained dancer with a degree from a school in Germany, where her military parents were stationed for a period. Night is a former gymnastics instructor who was once hired at one of the biggest gymnastics schools in Boston. For them, pole-dancing is a natural extension of those pursuits.

"When I first started doing it it was for exercise, and for learning the art and the sport," Teall explains. "Then I just also liked working at the club. But we've always considered it a sport." 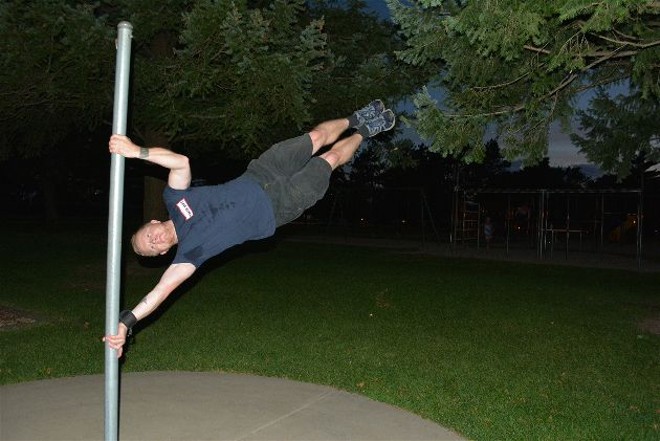 As their interest in pole-dancing grew, they found a like-minded community with adherents across the world. In countries like Germany, where Teall had her own dance studio for a while, they say pole-dancing doesn't have the stigma attached to it that it does in the U.S.

"In Germany it's accepted," she says. "In Russia — if you go online and you look up 'pole kids,' it'll show up places in Russia and Eastern Europe, and they are insanely talented. They're already doing advanced moves that adults can't do. They're doing moves that the most advanced pole-dancer that I know in the community is doing.

"The Olympic body last year recognized pole-dancing as a sport," Teall continues. "So it will eventually be in the Olympics. Might be next year, might be ten years from now. We don't know."

That recognition highlights something important to note about pole-dancing: There is nothing, in and of itself, about a human being spinning around on a pole that is inherently sexual. It's actually a physically demanding skill that takes a lot of practice and patience to perfect. Essentially it's acrobatics, but done vertically.

The similarities do not go unnoticed by former gymnastics instructor Night.

"[Gymnastics] did run into the same problems and the same stigmas we're running into now," he says. "You have little girls that are under the age of eighteen, some of them under twelve, in tight leotards, doing splits, jumping up and down. And then they would have the horizontal poles where they would go up and would do splits, and it had that same stigma. Then it hit the Olympics, and nobody said anything. And nobody seems to remember that that happened."

Still, try telling that to the unwashed masses of online commenters. The couple say they've seen a massive amount of hate mail and death threats since finding themselves in the spotlight. Even Sharon Osbourne, hardly the model of parental conservatism, blasted them on her daytime show The Talk.

"We've had death threats, we've had people say they're going to come and take our kids or call CPS," Teall says.

"When I tell people it's been thousands upon thousands, that's kind of an understatement," Night adds. 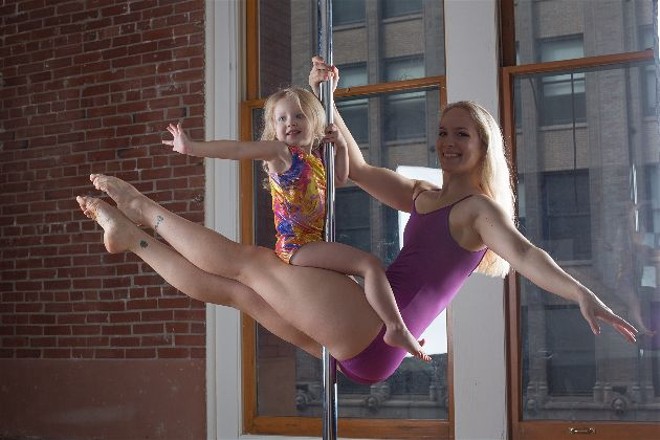 And yet, as the young ones run about the room without a care, laughing and smiling and eagerly hopping on the pole for a spin, it becomes more and more difficult to see what all the fuss is about. It's not like either of them have any idea what a strip club is, their parents point out. And playgrounds in parks and at schools have had poles built into their features for decades. It's obviously fun. What's the big deal?

Teall hopes that, with more awareness, the stigma against pole-dancing can be broken. She is writing and self-publishing a book called From Pointe To Pole, A Dancer’s Journey, detailing her transition from classically trained dancer to stripping and pole-dancing for fun and for money to becoming a competitive pole-dancer and teacher. She currently offers private pole-dancing lessons in her living room, and she hopes to one day open her own studio dedicated to the pursuit. As-pole dancing has become more accepted, moving from seedy strip clubs to larger stages, she has even performed with beloved local Pink Floyd cover band El Monstero on multiple occasions.

"I think that the stereotype is remaining because people are not speaking out about it," she says. "So in order to get it to evolve to where children can do it, we think that we need to speak out.

"You can separate the sexuality and the sensuality from the sport," she adds. "It's possible. People just need to get their minds out of the gutter."