Weird artists of St. Louis unite! In support of Artica's massive annual arts festival in October, which showcases some of the city's most creative creatives, organizers are hosting a show-and-tell session for budding artists.

Held at Schlafly Tap Room (2100 Locust Street) from 2 to 5 p.m. on Sunday, August 5, the Artica Artist Proposal Show and Tell lets artists make the case for their inclusion — and possibly even make a few bucks. Spectators must make a donation to get in, and their funds are then pooled and awarded to the three best entries, as voted on by attendees.

This is essentially a precursor to the Artica's larger, annual art festival, set to run from October 12 to 14 along the riverfront at Dickson and Lewis streets. Artists are encouraged to participate in both events, regardless of how their entry performs in the Show and Tell. The Schlafly event is just a way to foreshadow the excitement of the larger event — and, of course, help artists make some money.
“The mission of Artica is to support community building and to put money in the hands of the artists,” says Artica Board President Lohr Barkley. “The hardest part is finding them." 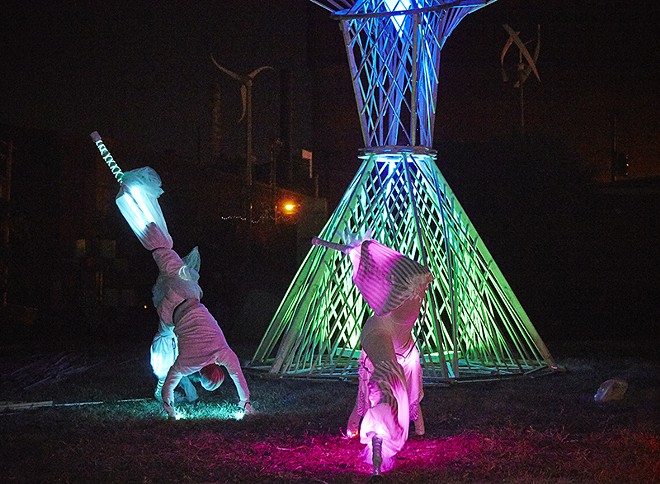 This year’s Artica theme is “MississippEpiphany” and focuses on art inspired by or about the Mississippi River.

The festival lives up to its name; it is a multimedia operation, meaning anything goes. Paint, sculpture, performance art, screaming into a corner, it’s all fair game – and eligible for the prize money.

“One of our board members likes to call it an anarchic festival," says Elizabeth McDonald, the secretary of Artica's board.

You could also call it St. Louis' version of Burning Man. For more than ten years, Artica has featured a dizzying mix of whimsy and creativity, with artist installations that have included everything from Extreme Croquette to an old-timey photo booth.

To sign up and participate in Artica's October festival, you can respond to its call for artists here. The deadline to enter is midnight on August 12. Or just show up at Schlafly on August 5 to get a much more visual depiction of the future action.