GeekCraft Expo, Debuting in St. Louis This Weekend, Is a DIY Comic Con

Daniel Way has been to a lot of conventions. The comic book writer (Wolverine: Origins, cult favorite Starr the Slayer and a little story called Deadpool) has attended every kind of comic book convention, from small local shows to the granddaddy of them all, San Diego Comic Con. Along the way, he saw some things he didn't like: the glut of vendors selling the exact same mass-produced items at pretty much the same prices, the way people who actually handmade limited edition comics or cosplay gear were always shunted into a remote corner and often-exorbitant entry fees that cut into attendees’ spending budget. Way believed there was room for a different kind of convention, and so with fiancee Kim Matsuzaki and friend Jenny Valle, created the GeekCraft Expo (cue lightning crash and Kirby crackle).

The expo is a traveling show of handmade goods that display a fascination with pop culture. You may encounter crocheted Star Wars characters in miniature, a robot-shaped lamp made of pipe fittings or science fiction-themed baby gear, all made by hand. "The idea is that I wanted each individual show to be a focal point that complements the local scene," Way explains. "The attendees buy from local businesses. That's an important part of it.”

The first GeekCraft Expo took place in Madison, Wisconsin, three years ago. Way and Matsuzaki live in North Carolina, so from the very beginning the show was on the road. Currently, shows are planned for Cincinnati, Boise and Richmond, Virginia, as well more populous regions such as San Diego and Boston, but Way remains committed to hitting smaller, less obvious cities. 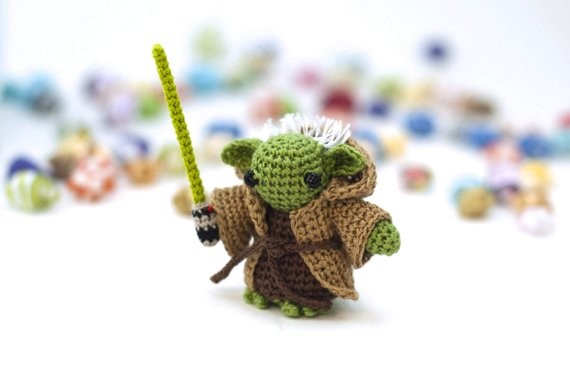 "I'm from a small town in Michigan," Way says. "Growing up there was nothing for me, and that's why I left. When you go to a small town, they're excited to see you. They appreciate what we're doing and they let us know."

The other atypical feature of GeekCraft Expo is that the organizers believe in keeping ticket prices as low as possible. In fact, admission is free.

"After going to so many conventions where tickets are $40 or $60, I knew we had to keep the barrier low," Way says. "We charge the exhibitors for space, but we don't want to put any barriers on anyone getting in."

The result is a show that's more like a community gathering.

"It's genuinely fun," Way promises. "A bunch of geeks get together and have a great time. You may be way into Doctor Who and they may be way into Gundam, but you understand each other."

Way is convinced that the appreciation and respect paid to vendors powers the GeekCraft Expo. “One-hundred percent of our attendance is there for them," he marvels. "We've seen this work all over the country. The geek community shows up, the DIY people show up and the 'support local business crowd' shows up.

"We even get cosplayers!," Way crows. "We had a full-on Dalek roll through the door in Seattle. It must have been seven feet tall. If you made something cool and want to show it off, these people will appreciate that."