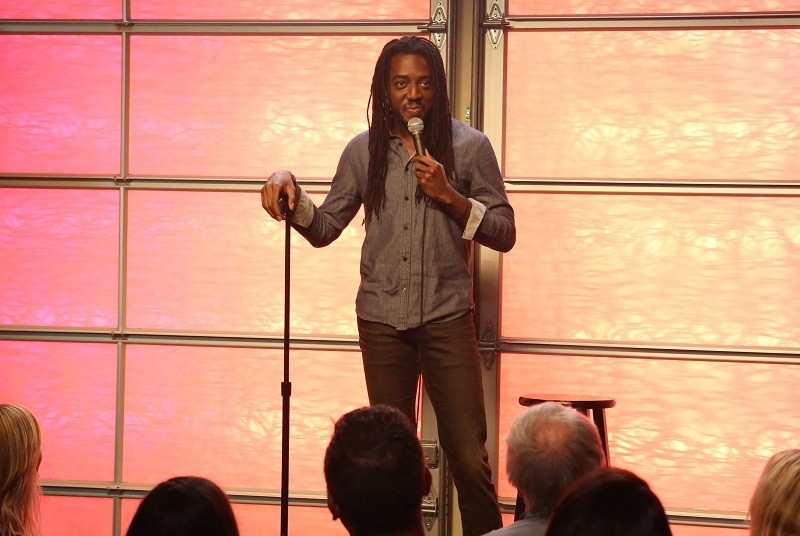 Despite the predicted cooler weather forecast for the weekend, a bunch of St. Louisans are getting naked this Saturday. Yep, it's time for the World Naked Bike Ride. Other options include a pair of art openings, the second half of LaBute Fest, and a comedy show featuring sixteen up-and-coming LGBTQ comedians.

1. See an art show about a lesser-known form of racism.
Racism is an undeniable fact of American life, and for black Americans there is an extra dimension to the problem. Black skin includes a spectrum of hues, from so light you can pass for white to exceptionally dark brown. The lighter tones are considered more desirable, even within the black community; the darker your skin, the more likely you are to face a particularly cruel form of prejudice that comes from within. Dark-skinned kids grow up without seeing themselves in mainstream media (with a very few notable exceptions) and must endure a barrage of insults and slurs. Interdisciplinary art duo WORK/PLAY (Danielle and Kevin McCoy) examine this insular form of racism in their new show, Colorism. Using experimental printmaking and minimal contemporary design, WORK/PLAY shows how our perception of color shapes our aesthetic sense and influences what we accept and reject. Colorism opens with a free reception from 6 to 9 p.m. Friday, July 20 at the Kranzberg Arts Center Gallery (501 North Grand Boulevard; www.kranzbergartsfoundation.org). The show remains on display through September 3.

2. Knitted ceramics from across the river.
Ceramicist Jeremy R. Brooks is currently based in Carbondale, Illinois, where he's teaching at Southern Illinois University. His own studies include an unusual type of clay with a rubber-like elasticity that sets up quickly. Working quickly, he extrudes paper-like slabs and long coils, which he can then use for knitting, weaving or crocheting. The resulting forms have a plasticity that seems nearly impossible. Knitted vessels made from delicate strands of clay, sinuous loops of loosely bunched clay-yarn, a rainbow skein of fibers wrapped around itself that approximates the whorls and shape of a brain — Brooks' work is both trompe l'oeil and trompe l'clay. A small exhibition of Brooks' ceramics go on display this weekend at the Duane Reed Gallery (4729 McPherson Avenue; www.duanereedgallery.com), along with Brian Smith's abstract paintings. The show opens with a free reception from 5 to 8 p.m. Friday, July 20, and remains on display 10 a.m. to 4 p.m.. Tuesday through Saturday through August 31.

3. Bike hard, ride free.
Can you hear that rustling sound? That's the sound of hundreds of people dropping their clothes in preparation for the 2018 World Naked Bike Ride. The St. Louis edition of the worldwide event is now in its eleventh year and has grown to become one of the best-attended rides. And why not? St. Louisans have nothing to hide, and they love to ride — the World Naked Bike Ride combines both of those elements. Riders will begin assembling at 4 p.m., and the costume contest takes place at 5 p.m. (categories include "best creative DIY," "best dance moves" and "most hairy"). The ride itself starts at 6 p.m. Saturday, July 21, in the Grove (Manchester and Kentucky avenues; www.wnbrstl.org). Admission is free, but if you want to eat or drink you'll need to stash some money somewhere on your person.

4. More new plays at St. Louis Actors' Studio.
The second half of the LaBute New Theater Festival kicks off this weekend. In recent years, this has been the half of the fest that contains the gems. Neil LaBute's disturbing one-man short "The Fourth Reich" once again opens the show; it stars Eric Dean White as a pleasantly evil man out to convince you he's a rational human being. White is so good that he almost pulls it off. Three more one-acts follow: "The Gettier Problem," "Unabridged" and "The Process." Performances take place at 8 p.m. Thursday through Saturday and 3 p.m. Sunday (July 20 to 29) at the Gaslight Theater (358 North Boyle Avenue; www.stlas.org). Tickets are $30 to $35.

5. Take a chance on it.
Sophie's impending marriage to Sky will be perfect, except for the fact that she's never met her father and has no one to walk her down the aisle. So she does what any adult would do — she reads her mother's old diary in search of her father's name. Sophie discovers three possible candidates, and promptly sends each potential dad an invitation to the wedding in the belief that she’ll know her father when she sees him. What could possibly go wrong? It's not like she could embarrass her mother and spoil her own party, right? Mamma Mia!, the wildly popular musical built around the songs of ABBA, is presented by Stages St. Louis Tuesday through Sunday (July 20 to August 19) at the Robert G. Reim Theatre (111 South Geyer Road, Kirkwood; www.stagesstlouis.org). Tickets are $50 to $66.

6. Out comics break out.
Zach Noe Towers is an out-and-proud gay comic on the rise, dubbed a comedian to watch in 2018 by Out magazine. If you haven't seen him yet there's a remedy. Towers is the host of Out on Stage, a stand-up show that will feature sixteen gay-and-lesbian comics who are on the verge of breaking out. Julian Michael, Irene Tu and Gloria Bigelow are all featured in this one-night-only performance, which screens nationally courtesy of Fathom Events. Out on Stage is shown locally at 8 p.m. Tuesday, July 24, at Marcus Wehrenberg Ronnies 20 Cine (5320 Lindbergh Boulevard; www.fathomevents.com). Tickets are $15.