If You're Gonna Plant Your Bare Butt on a Bike Tomorrow, Be Kind, Cover the Seat 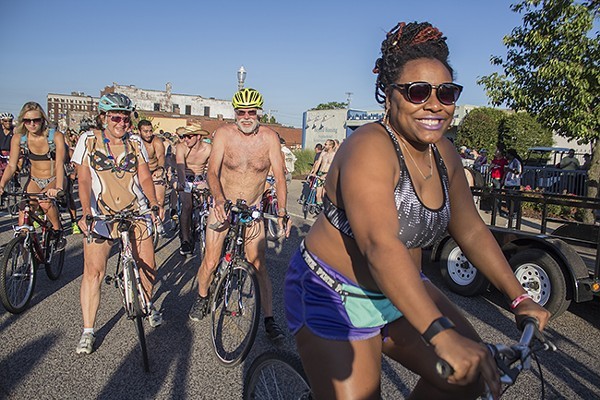 St. Louis' version of the World Naked Bike Ride kicks off tomorrow. And yes, event organizers are expecting bike rentals like LimeBike to join the fray this year — which means there's high probability that a whole bunch of naked butts will be coming in proximity with the bacterial equivalent of, well, a bus seat.

The point is: Cover that seat up before you put thirteen-miles' worth of sweat onto some poor LimeBike or Ofo. (That is, as long as Ofo's distinctive yellow cycles are still around this weekend, since it appears the startup is planning to withdraw inventory from St. Louis.)

And look, that's not just our advice, but also LimeBike's:

"We encourage all who dare to bare on a LimeBike for a World Naked Bike Ride to bare responsibly. Out of respect for the next rider, we ask that nude riders use seat covers or clothing accordingly for sanitation purposes," spokeswoman Emma Green said in an emailed statement.

LimeBike will be doing its part to keep those seats clean, too, Green added: "Our local team always carries sanitation wipes and wipes down equipment as part of our maintenance routine, but we will take extra precautionary sanitary measures on the day of the ride."

Now in its eleventh year, the World Naked Bike Ride is technically a political protest — being an act protected by the First Amendment is what allows the massive group of nude and nude-ish cyclists to bear down on city streets in broad daylight — although the object of that protest has never been formally defined. Whether it's opposing fossil fuels, supporting cannabis or just dressing up like Mortal Kombat characters (warning, links NSFW), it's all good reason to, as the event's tagline goes, "bare as you dare." And yes, shared bikes are A-OK for that act of protest.

Still, a note of caution from event organizer Matt Hartman: If you are planning on pedaling a LimeBike or an Ofo, once you lock up a bike, you risk losing it.

Hartman says the ride's organizers tried reaching out to the rideshare companies, and at one point Ofo was apparently set to ink a sponsorship deal that would offer additional bikes in the starting area. However, Hartman says that the deal fell apart because the city's contracts with the rideshare companies mandate that rental bikes remain equally available in all areas of the city — a condition that would be violated by redistributing a bunch of bikes to the Grove on Saturday.

And that means bikes could be in short supply near the staging grounds.

"You're not guaranteed that that bike is going to be there waiting for you," he says. "There's no way to reserve a bike. I would hate for somebody grab a bike in front of their apartment in the Central West End where they live, ride it here and that's their only mode of transportation, [and] they lock it up and then somebody else unlocks it before they can get to it."

So, to recap, If you're riding a rental bike at the World Naked Bike Ride:

1. Cover either your butt or your seat.
2. Don't let yourself get stranded.

For more information on the ride, which starts at 4 p.m. in the Grove, check out the event website here. The route covers about thirteen miles, and while the pace is fairly sedate, it's no short jaunt down the street — but hey, at least you're not on LimeBike's seat-wiping sanitation squad. Talk about dirty jobs.