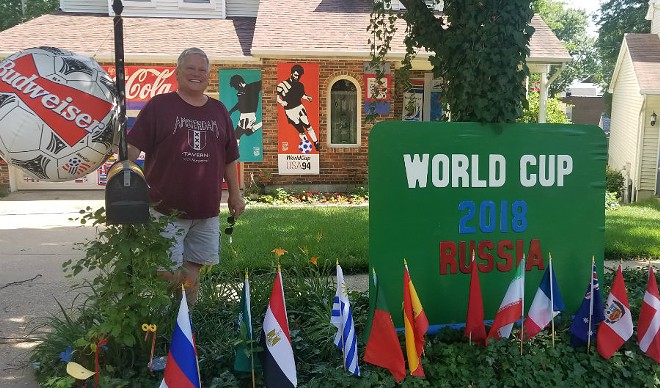 In October 2017, Bob Waeltermann sat on his usual stool at south city's Amsterdam Tavern as he watched the United States men’s national soccer team lose 2-1 against Trinidad and Tobago, failing to qualify for the World Cup for the first time since 1990.

And yet in the last two weeks, Waeltermann has been perched on the very same stool, watching the Russia 2018 World Cup, sans the U.S. “As you can see,” he says, “I got over it, of course.”

In fact, the stool where Waeltermann sits as he watches the World Cup this summer now carries a special inscription: “Reserved for Bob Waeltermann, South City Legend.” The owners of the tavern agreed to reserve the seat for Waeltermann during the tournament because of his loyalty and passion for the sport.

For Waeltermann, 68, a former high school soccer player, coach and referee, the World Cup is a must-see even without the U.S.’ participation. In fact, for every World Cup, men’s and women’s, Waeltermann decks his Southwest Gardens home with an exorbitant display of soccer paraphernalia celebrating “the beautiful game.”

“I’ve always been a fan, and I recognized it’s a global game,” Waeltermann says. “So in 1990, when the U.S. qualified for the World Cup for the first time since 1950, I put up some paper signs and some American flags to celebrate the occasion.” He’s done it every World Cup since, and this one is no exception.

Waeltermann’s wife, Kathy, says she tolerates and even helps her husband with the decorations. She likes to follow the sport, and doesn’t mind the decorations on the outside of the house.

“People in the neighborhood thought he was crazy,” Kathy says. “And then, every four years it just keeps getting bigger.” 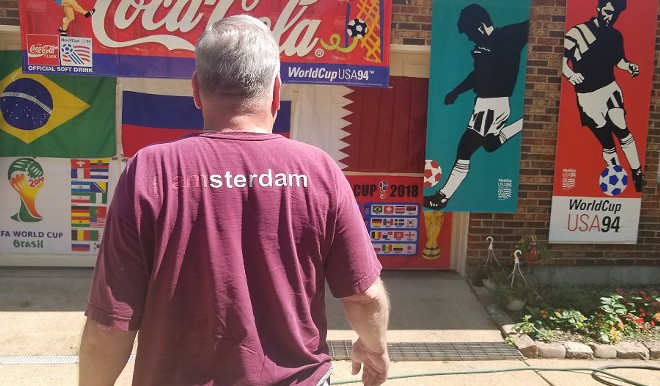 Waeltermann always displays the 32 flags of the teams that have qualified for the World Cup, along with banners and posters from previous World Cups and other soccer memorabilia, such as a couple of large, inflatable soccer balls - one which ended up on a neighbor’s yard after one recent storm.

“My neighbors seem to be OK with it,” Waeltermann says. “They are amused, curious. We had a few occasions in which somebody almost bumped into something because they were rubbernecking as they drove by the house.”

Waeltermann sees his decorations as playing a role in exposing others to the game.

“I like feeling part of a global event like that,” Waeltermann says. “These decorations are my small efforts to maybe influence somebody else to be curious about the sport, put a smile on their face. Or maybe they are laughing at me. I don’t know, and I don’t care.” Waeltermann’s decorations may seem a little out of place in a city dominated by baseball, but St. Louis has a long history of passionate soccer fandom — and the rest of the U.S. is expected to get on board the bandwagon soon. Eight years from now, the World Cup will be hosted in cities all across North America, including Kansas City and Nashville. Perhaps by then, Waeltermann says, his decor will not seem so unique.

“I hope, if I’m still around by then, that I can still do it and the decorations will be even bigger and better than ever,” Waeltermann says.

Matt Stelzer, co-owner of Amsterdam Tavern, says Waeltermann exemplifies the hundreds of loyal patrons who crowd the bar to capacity during every major soccer tournament.

“I’ve seen soccer grow in general in the U.S. exponentially in the last 10 to 15 years, and now it’s not just guys or girls who grew up playing soccer in the U.S. who are passionate about it, but it’s actually regular people, fans who caught up to the game later in life and maybe never even played it who can’t get enough of it,” Stelzer says.

But as far as decorations go, Stelzer says no fan can match Waeltermann’s outdoor World Cup decorations, not even his own bar.

“His house is insane,” Stelzer says. “I guess we need to step up our game.”

There are two more weeks left of this 2018 World Cup, and Waeltermann says he hopes people pay attention so they can prepare for what’s to come eight years from now.

“Watch what the world is doing right now,” he says. “We can do that too. If the United States puts their mind to it, there’s nothing we can’t do.”