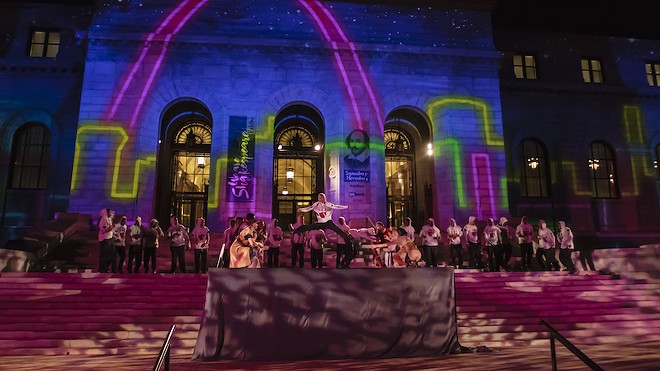 June is not the usual month for Shakespeare in the Streets to take the open spaces of a neighborhood to present a new play inspired by one of Shakespeare's originals. That normally happens in September, when there's a chance those streets won't be as hot.

But last autumn Olive Street in front of the Central Branch of the St. Louis Public Library was far too hot for a play. In the days following the acquittal of former police officer Jason Stockley on murder charges, protesters were demonstrating for justice on that very street — and police were strenuously attempting to contain them. Both the city and Shakespeare in the Streets agreed that it wasn't quite the right time or place to put on a play. Nancy Bell's Blow, Winds, which is inspired by King Lear, drifted away like so much tear gas fired into a crowd of civilians: agonizingly slowly.

Tom Martin was one of the directors working on Blow, Winds, and the phantom limb of Bell's unseen play pains him still.

"It was devastating," Martin says of the choice to cancel. "It's one of the hardest thing I've had to do. We hoped we could at least get one performance, but I talked to our security guys and they said, ‘There's a protest in the area and it was getting dark.”

In that, they weren’t referring to nightfall. "I came down and there were guys running through the set, tearing up the chairs. Police were chasing them, shooting plastic bullets as they went," Martin says quietly. "We had a lot of expensive equipment down there, but none of that was damaged.” He adds wryly, “We did keep seeing our green chairs at other protests.”

See photos from that night: Before Destruction, Downtown Swelled with Protesters

The cast and crew still wanted to mount the show in some format, even considering a sit-down version of the play that would be more of a reading than a play. But it wouldn't be the whole play, and it wouldn't be in the streets. Ultimately, though, they decided to wait for a more opportune time to reassemble the production, and do it properly.

Now things have quieted, and Blow, Winds will sweep the steps of the St. Louis Public Library (1301 Olive Street; www.sfstl.com) on Friday and Saturday (June 15 and 16). Except that it's not the production that would have been performed nine months ago.

"It's essentially the same, but it's a wiser, stronger version," Martin explains. "The version we had wasn’t set for the post-Stockley era. The original version was sunnier; this is more astringent."

It's hard to imagine a "sunnier" version of a play inspired by the madness, abandonment, death and destruction of King Lear, but Martin is speaking about the effect of witnessing the ugliest truths about life in St. Louis being played out in the ruins of a production that failed to acknowledge those truths.

"The last time it ended on a vision, with the Fool giving a long monologue about the better things to come," Martin clarifies. "This time it ends with a challenge. One of the things that we glommed onto was boundaries. St. Louis has boundaries. There's redlining, there's age, there are the sociological boundaries. The map plays a pretty large role in it this time."

Blow, Winds is about King Louis, ruler of St. Louis, and his decision to abdicate his power to his two venal daughters. Soon St. Louis is in even worse shape, and war breaks out in the streets, performed by the step company Gentleman of Vision. Stepping uses percussive footwork and stylized movement to create an art form that is uniquely African American, and Martin is unstinting in his praise for what the company brings to the show. "Gentlemen of Vision is force of nature when they start," he says. "Just razor sharp. It's a stylized combat, step combat."

One of the other changes to the play is more meaningful in the broader world. The cast, Martin says, now blends into the neighborhood around the library better than it did last fall. They've taken into account the people who live on the streets, and the cast has been serving meals at the St. Patrick Center, working to get to know its clients.

"The play is very much about homelessness," Martin says. "Some have come down and talked to us about the show; they like that that element is being addressed."

Martin is thankful for that, and he's also thankful it's almost time to present Blow, Winds to St. Louis, at long last. “I’ve been carrying around this haunting memory. I'm very grateful to get do it."