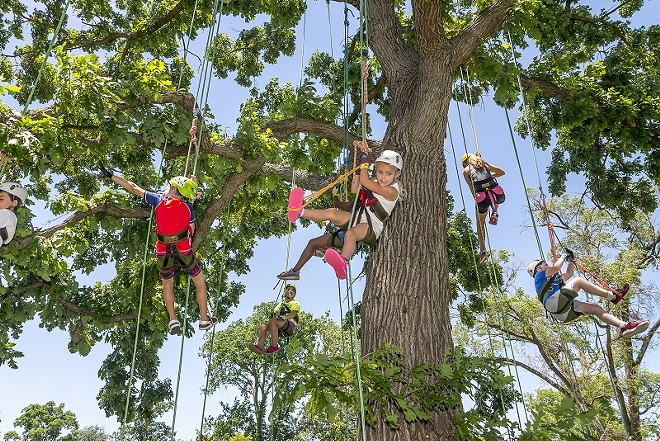 It's an absolutely packed week with theater, opera, a baseball legend and a rather large cocktail party. Oh, and the little matter of the Muny's 100th season, which begins on Monday. It's a lot, so get busy readin', plannin' and doin'.

1. See an early classic drama of modern theater
In early 2017 Stray Dog Theatre mounted an excellent rendition of Henrik Ibsen's groundbreaking drama A Doll's House, aided in large part by an absolutely stellar cast. This year the company tackles Ibsen's Hedda Gabler, the same cast in place. The play is the story of a newlywed woman who got married for the wrong reasons and is already bored with her work-obsessed husband, Jørgen. Jørgen is up for a professorship, and his main challenger, Ejlert, is a brilliant writer who has mostly tamed his alcoholism thanks to the help of his wife Thea. Hedda hatches a cruel plot to take Ejlert out of the running, but the best-laid plans often fall apart along the way. Stray Dog Theatre presents Hedda Gabler at 8 p.m. Thursday through Saturday (June 7 to 23) at the Tower Grove Abbey (2336 Tennessee Avenue; www.straydogtheatre.org). There is one matinee at 2 p.m. Sunday, June 17. Tickets are $25 to $30.

2. They're dead and not loving it
Charles is a successful novelist who engages a medium to hold a seance in his home for the purposes of his next book. Instead of an idea he gains the spirit of his first wife, Elvira, who is quite annoyed by his current wife, Ruth. Truly desperate to be alone with her husband, Elvira tampers with his car in hopes of killing Charles and reuniting in the spirit world. Unfortunately it's Ruth who gets behind the wheel, and she ends up dead — and ready to battle with Elvira. What's a man to do when both his dead wives are making his life miserable? Noël Coward's comedy Blithe Spirit is produced by Act Inc as its only show this summer. Performances are at 8 p.m. Friday and 2 p.m. Saturday and Sunday (June 8 to 24) at the Scheidegger Center for the Arts on Lindenwood University's campus (2300 West Clay Avenue; www.actincstl.com). Tickets are $20.

3. Love blooms in Maplewood
Former St. Louisans Elizabeth Rorhbaugh and Daniel Powell's 2017 feature film Becks was entered in the 2018 edition of QFest, and it now receives a short run courtesy of the Webster Film Series. Set in Maplewood, Becks stars Tony Award-winner Lena Hall as a singer/songwriter who has to move back in with her disapproving mother (Christine Lahti) after her long-distance relationship ends badly. She soon meets Elyse (Mena Suvari), and an unlooked-for relationship starts to bloom. The film returns at 7:30 p.m. Friday through Sunday (June 8 to 10) and again at 7:30 p.m. on Tuesday, June 12, at Webster University's Moore Auditorium (470 East Lockwood Avenue; www.webster.edu/filmmaker). Tickets are $5 to $7.

4. It's over, he goes under but he can't get through
Christoph Willibald Glück's opera Orfeo and Eurydice begins with Eurydice's funeral, as Orfeo laments the death of his beloved wife. Amore (more commonly known as Cupid) arrives to tell the bereaved that he may go recover Eurydice from Hades and bring her back to life, but there's a catch: If Orfeo looks back, Eurydice will die permanently. He makes the long journey to the realm of the dead, but neglects to mention to his beloved the conditions of her return. Opera Theatre St. Louis presents Orfeo and Eurydice at 8 p.m. Saturday, June 9, at the Loretto-Hilton Center (130 Edgar Road; www.opera-stl.org), with Missouri native Jennifer Johnson Cano in the role of Orfeo and the Big Muddy Dance Company as the dance corps. The show is performed five more times in repertory through June 23. Tickets are $27 to $132. 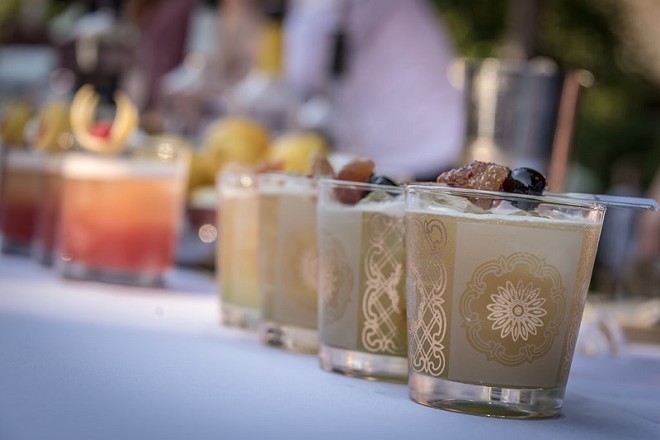 5. Cocktail hour breaks the 60-minute mark
St. Louisans like a drink, that's no secret. Our shared fondness for the hard stuff led Mrs. Julius C. Walsh Jr. to devise and host the first-ever cocktail party at her Central West End home in 1917. Despite her relative anonymity, the neighborhood continues to honor her spirit and her love of the spirits with the CWE Cocktail Party — and you're invited to attend. From 5 to 10 p.m. Saturday, June 9, on Euclid Avenue between Maryland and McPherson (www.cwecocktailparty.com), there will be a cocktail competition, as well as live music by Miss Jubilee, Grass Fed Mule and other local bands. Neighborhood bars and restaurants will be selling celebratory drinks and food to ensure it's a real party. Admission is free.

6. Listen to your mom and get outside
Everybody knows that St. Louis will be crotch-drowningly hot in the summertime, and not in the good way. That doesn't stop St. Louisans from doing stuff outside, but it can make it hard to try something new. That's one reason the Great Rivers Greenway presents the Life Outside Fest from 10 a.m. to 4 p.m. Saturday, June 9, at Creve Coeur Memorial Park (13725 Marine Avenue; www.greatriversgreenway.org/life-outside/). This smorgasbord of outdoor activities gives you the chance to try a new activity for free, with experts on hand to help you work out the kinks. Have you always wanted to climb a tree? Ropes and safety harnesses are waiting. Kayak, or stand-up paddle board? There's a lake a few feet away. If you're looking for something more sedate, you can try birdwatching, yoga and gardening — all of those will get you outdoors as well. 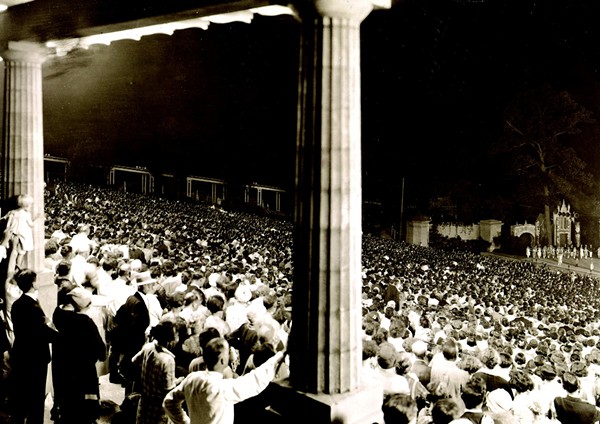 7. The history of the Muny goes on display
The Muny is just about to open its landmark 100th season, and its neighbor, the Missouri History Museum (Lindell Boulevard and DeBalivere Avenue; www.mohistory.org), celebrates the occasion with an exhibit dedicated to the history of America's largest outdoor theater. Muny Memories: 100 Years on Stage features exhibits that explain the founding of the theater, display favorite memories from stars and staff, and give a look back stage to see how the dedicated technical crew creates and rigs all those sets and lights. You can also take a look at programs from the Muny's long, storied past. Muny Memories opens on Saturday, June 9, and remains on display daily through June 2, 2019. Admission is free.

8. If he asks him to help you move, get out
Keith Hernandez was a fan favorite during his stint with the St. Louis Cardinals in the 1980s. The first baseman could hit and field, leading the team to a World Series title in 1982. He repeated those feats when he went over to the New York Mets after rumors of his cocaine habit became unavoidable (he later admitted they were true), picking up his second championship with the Cardinals then bitter rival (competency is the Mets great foe currently). His post-baseball career includes a legendary guest-starring role as himself on Seinfeld and a surprising bluntness when manning the microphone in the Mets broadcast booth — perhaps his most infamous statement is that women don't belong in the dugout, even if they're team employees. Hernandez signs copies of his new memoir I'm Keith Hernandez (the title is taken from his Seinfeld appearance) at 4 p.m. Sunday, June 10, at Left Bank Books (399 North Euclid Avenue; www.left-bank.com). The book covers his minor-league career and his stint with the Cardinals up to about 1980. Your $31 ticket will admit a family of four and includes a hardcover copy of the book.

9. The Muny makes a new century of memories
Jerome Robbins was the man with the golden touch during the golden age of the musical. Robbins began as a dancer, then moved into choreography. He designed the dances for On the Town and The King and I, and then added director to his portfolio with Peter Pan, West Side Story and Gypsy (all of which he also choreographed). Portions of all of these great shows show up the Muny's season-opener, Jerome Robbins' Broadway. Think of it as a greatest hits of one of Broadways greatest hitmakers. Performances are at 8:15 p.m. Monday through Sunday (June 11 to 17) at the Muny in Forest Park (www.muny.org). Tickets are $15 to $100.

10. Two days of films packed in an evening
The 48 Hour Film Fest is an annual competition that requires teams of filmmakers to write, direct, shoot and edit a short film in the space of 48 hours. Just to make it interesting, all teams must incorporate a character, a prop and a line that won't be revealed until the competition’s start. Once all the films are finished and turned in, they will be screened at 1 p.m. Saturday, June 9, at Washington University's Brown Hall (One Brookings Drive; www.48hourfilm.com/en/stlouis), with the audience and a special panel of judges both voting for their favorites. If you want to skip to the end and see which films win the top award, the "best of" screening takes place at 7 p.m. tonight Brown Hall. Tickets are $13.