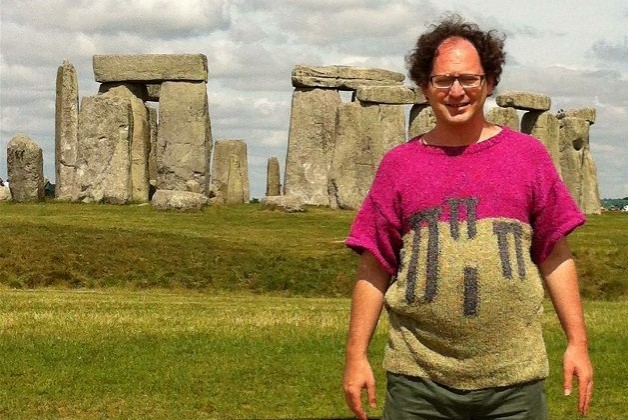 The 43-year-old Baltimore native has traveled the world, his work taking him to 33 different countries and every state in the U.S. except Hawaii and Oregon (he's quick to note that he'll get to those two eventually). He's highly in demand for his unique skill set, and most times the citizens of the places he visits foot the bill for all of his expenses.

So what does the well-traveled Barsky do for a living? Surely he's some high-power consultant to the international corporations of the world, right? Maybe a crack pilot for the jet-setting glitterati?

"I started knitting back in 1999," Barsky tells RFT. "I had just dropped out of nursing school and I was looking for something else to do with my life. I had been interested in knitting for several years before that, and I had a chance meeting with the owners of a yarn shop. I asked them, 'Where can I learn to knit?' And they said they can teach me for free under the condition that I would buy their yarn."

Barsky took them up on the offer. Unbeknownst to him at the time, what began as a hobby would go on to catapult him to viral fame.

Barsky's niche is knitting landmarks from cities around the world onto sweaters, then visiting those landmarks and taking selfies while clad in his completed work. With nearly 50,000 followers on Facebook and coverage by news outlets ranging from the New York Times to the BBC to the Washington Post to his own hometown paper, the Baltimore Sun, Barsky is a genuine (if super quirky) success.

And now, finally, he's bringing his talents to St. Louis.

"St. Louis was on my list for a long time," Barsky explains. "I've made lists from time to time of different landmarks all around the country and the world that would be very sweater-worthy, and the Gateway Arch was one of them."

Our city's most famous landmark will be in good company. To date, Barsky has knitted some 120 sweaters depicting everything from Times Square, the Golden Gate Bridge, Tower Bridge in London, Stonehenge and the Eiffel Tower. In his earlier days he would knit places that he had already been to, but eventually his work became more aspirational: He'd knit places he'd not yet visited, then take photos with his sweaters' subjects once he was able to travel to them.

And lest this sound like a social media stunt, Barsky knit purely for himself for nearly two decades before a January 2017 post on online image-sharing site Imgur catapulted him overnight to viral fame. The post, which featured several of Barsky's selfies and the caption, "This guy makes sweaters of places and then takes pictures of himself wearing the sweaters at those places," has since been viewed more than 1.5 million times.

"I woke up on a Sunday morning and found I had over 100 Facebook friend requests from people I'd never heard of before," Barsky says of the sudden burst of attention. "It was very overwhelming at the time. I had gotten 3,000 emails in a couple of days requesting interviews and this and that, and I couldn't even reach out to all of them because it was just too much to manage."

Now, this being the internet, there were some trolls and detractors that came with the virality. But Barsky doesn't let them bother him.

"For every negative comment I get on something, I get hundreds of more positive ones," he says. "So I'm not really concerned about that. There are always going to be people like that in this world. I don't let them tear me apart."

Barsky was soon able to parlay his sudden fame into a viable career. Now, when he visits landmarks around the world, he's brought to town by their neighbors. He only asks that his travel expenses be covered, plus, as he puts it, "a little something to take home."

Barsky's St. Louis trip comes via Oh So Vivant, Das Bevo and Earthbound Beer. They will be throwing a party where the public can meet the artist in the flesh at Das Bevo (4749 Gravois Avenue, 314-832-2251) on June 21 from 6 to 10 p.m. There will be a photo booth where you can get a picture with Barsky, a "tap takeover" by Earthbound and music courtesy of Larry Haller and the Good Times Band.

The businesses behind the trip have launched a Kickstarter campaign with rewards including stickers and t-shirts; a full breakdown of expenses is included in the description of the campaign as well.

And though it's Barsky's first trip here on business, it's not his first time in St. Louis. Barsky fondly recalls a road trip his family made here when he was just a boy.

"I was in St. Louis 29 years ago," he says. "I was fourteen back then, in middle school, and I had learned that year about the Westward Expansion. The textbook I had, as I recall, had a picture of the Gateway Arch in it, and I thought, 'Wow, I'd like to see that one day.' So I came home and I told my parents I wanted to go there for our summer vacation and they said, 'OK, that's a good idea.'"

The family struck out on the road, driving from Baltimore all the way to St. Louis, just so the young Barsky could see the Arch.

"I didn't know it at the time when I saw it in my textbook, but my mother had done some research on it and she said, 'You know that you can go up in the Arch? There's an elevator that takes you to the top of the Arch.' I didn't know that. So as a family we did that."

Maybe it's that early exposure — or maybe its the fact that the Arch is, after all, just a giant upside-down "U" shape — but Barsky says the Arch sweater, which he has already nearly completed, has been "pretty easy." That could be why he decided to up the ante.

"I was trying to figure out what I would put on the back of it," he says. "I'm doing the courthouse, it turns out, which looks like a miniature of the U.S. Capitol.