June is here, and with it comes a landslide of stuff to do. Shakespeare Festival St. Louis returns with a remount of its first show, Stages St. Louis opens its new season, New Line Theatre wraps up its year with a show about yeast falling in love and the Sheldon opens its golf course.

1. Yeasts in love
Love and musicals have been creative partners for a long time, but three billion years ago, both were foreign concepts. Then, on the floor of the primal ocean, single-celled yeast are the dominant species on the half-baked earth. These yeast cells all share the name Jan, and they all eat nothing but salt. Salt is becoming more difficult to find, and all the Jans are starting to worry about what that means for the future. The spontaneous appearance of love, which is shared by two of the Jans, further threatens the yeast society. Something has to change, but what will it be? Mark Hollmann and Greg Kotis' musical Yeast Nation has the irreverence and meta-nature of their earlier collaboration Urinetown, but with perhaps a little more optimism. New Line Theatre presents Yeast Nation at 8 p.m. Thursday through Saturday (May 31 to June 23) at the Marcelle Theater (3310 Samuel Shepard Drive; www.newlinetheatre.com). Tickets are $15 to $22.

2. Grappling with lucha libre
Anna Skidis Vargas is a familiar sight on St. Louis stages, as is her brilliant, singular singing voice. She's starred in musicals all over town, from classics like Godspell to the low-rent thrills of Evil Dead the Musical, and worked behind the scenes as a director as well, most often for Theatre Nuevo. She's as gifted an actor as she is a vocalist, which adds depth to every role she assays.

Her current passion is lucha libre, the Mexican style of professional wrestling that often features fabulously masked luchadores performing high-flying acrobatic maneuvers and technical holds. But Skidis Vargas is not planning a career change; she's in the midst of directing Luchadora!, Alvaro Saar Rios' award-winning play about a family of luchadores.

The play is a family-friendly story inspired by the legend of Mulan, the Chinese girl who disguised herself as a man to fight a war in her father's stead. Luchadora! centers on a grandmother and granddaughter in a similar situation. Nana Lupita wanted to become a luchadore when she was a young girl, but the ring wasn't an option for women in the 1960s. Still, with the right costume and a mask, Lupita could maybe pass for a man and fulfill her dreams of becoming a famous luchadore. She recounts the story of her adventures to her granddaughter Vanessa, who shares similarly outsized dreams.

"One of the things that's near and dear to my heart about the play is that it shows how rich Mexican culture is," she says. "Beyond the masks and the sport, Rios touches on migrant works, war, the migrant experience, identity and feminism. It's feminism for young Chicana girls. We're not always portrayed well on TV, but this depicts our culture in such a beautiful way."

3. Play through the galleries
Miniature golf courses are part sport, part pop-art installation, with an emphasis on big, colorful distractions and obstacles surrounding the final hole. The galleries at the Sheldon (3648 Washington Boulevard; www.thesheldon.org) embrace the art portion of the set-up with the summer exhibition, Golf in the Galleries. Local artists and institutions were given the chance to design their own creative hole on a nine-hole course that fills the galleries. B.J. Vogt crafted a volcano-themed hole; sink your ball and it erupts in a cloud of packing peanuts. Justin King's Serengeti Park hole mimics an urban park, but with beautifully detailed, anthropomorphic cardboard animals sitting on the benches and strolling the paths. There's an Alice in Wonderland hole courtesy of Natalie Pinson, and design firm Arcturis used lighting and mirrors to create a simple-looking green that will bedevil duffers with optic distortions and tricky slopes. Golf in the Galleries officially opens with a public viewing from 5 to 9 p.m. Friday, June 1, but tee times start at 11 a.m. Sunday, June 3. The course is open noon to 8 p.m. Tuesday through Friday, 10 a.m. to 3 p.m. Saturday and 11 a.m. to 4 p.m. Sunday through August 12. Greens fees are $6 to $12.

4. 50 years of love and marriage
Fifty years is a long time for anything to last, but a marriage that lasts for five decades is a lifetime. The musical I Do! I Do! opens with Michael and Agnes on their wedding day, and then periodically peeks in on their bedroom for the next 50 years. They experience the joys and pains of any longtime relationship, as well as the doubts, mistakes and regrets of people who take love for granted. The Harvey Schmidt/Tom Jones musical I Do! I Do! opens Stages St. Louis' new season. Performances are Tuesday through Sunday (June 1 to July 1) at the Robert G. Reim Theatre (111 South Geyer Avenue; www.stagesstlouis.org). Tickets are $41 to $63.

5. Star-crossed lovers under the stars
Romeo is but a simple boy of Verona's ruling class who deeply loves his fair Rosaline. Or so he says; once he sees Juliet, he forgets ol' what's-her-name and ardently pursues the fair Capulet instead. But he's a Montague, and the Montagues and Capulets are locked in a power struggle. What begins with love at first sight becomes a series of duels to the death and tit-for-tat attacks. Poor Romeo and Juliet, drunk on young love, are caught up in the middle of it all, which does add a certain frisson to the romance. Shakespeare Festival St. Louis brings the beloved tragedy Romeo and Juliet back to Forest Park for the first time since the festival's 2001 debut season. This new production is performed at 8 p.m. Wednesday through Monday (June 1 to 24) at Shakespeare Glen in Forest Park (Fine Art and Government drives; www.sfstl.com). Admission is free.

6. An American tragedy
America at its best is a nation based on the belief that people who may not look alike, worship the same way or come from the same background are all capable of believing in and defending the American dream. Huang Ruo and David Henry Hwang's opera An American Soldier is inspired by an incident when soldiers refused to accept one of their own because of the way he looked. Danny Chen was born in New York's Chinatown and enlisted in the Army after high school. During basic training he was welcomed as another true patriot, willing to fight and die for his country. But when he arrives in Afghanistan, he quickly learns his Chinese-American background doesn't sit well with his racist superiors, who repeatedly and sometimes violently abuse him under the guise of "hazing." The world premiere of the full-length version of An American Soldier gets underway at 7 p.m. tonight at the Loretto-Hilton Center (130 Edgar Road; www.opera-stl.org). The show is performed five more times in repertory through Friday, June 22.

7. Road trip
Tommy Wiseau and Greg Sestero's epic road movie continues in Best F(r)iends Vol. 2. When we last left the drifter Jon (Sestero), he was on the run in the Southwest after double-crossing Harvey the mortician (Wiseau), his one-time partner in crime. Jon encounters a host of bizarre characters, while the betrayed Harvey pursues him to the surprising end of the road. Best F(r)iends Vol. 2 screens at 8 p.m. Monday, June 4, at the Marcus Wehrenberg Des Peres 14 Cine (12701 Manchester Road, Des Peres; www.fathomevents.com). Tickets are $14.50. 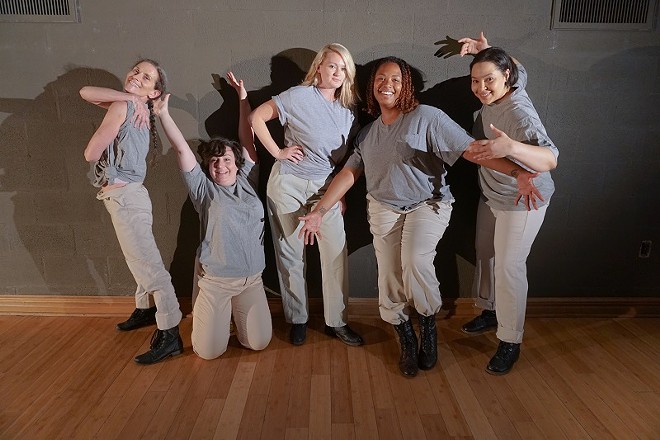 8. A long sentence
The women-in-prison genre is a frequent subject for film and TV, but incarceration isn't always as entertaining as Hollywood would have you believe. Prison Performing Arts commissioned playwright Stacie Lents to write a play about the true world of women's prisons. Lents interviewed the inmates of Women's Eastern Reception, Diagnostic, and Correctional Center in Vandalia about their experiences and then crafted the drama Run-On Sentence. The play focuses on how the arrival of a new inmate breaks up the routine and lives of a group of cellmates, and not necessarily in a good way. SATE opens its twelfth season with Run-On Sentence. It will be performed at 8 p.m. Wednesday through Saturday (June 6 to 9) and Wednesday through Sunday (June 13 to 17) at the Chapel (6238 Alexander Drive; www.slightlyoff.org). Tickets are $15 to $20.

9. That kid is back on the elevator!
The Strange Brew film series has a new home — screenings now take place at Urban Chestnut's Brewery and Bierhall in the Grove (4465 Manchester Avenue; www.webster.edu/film-series). The series' commitment to the weird and unfairly ignored films of the world remains, though, as do the price ($5) and the starting time (8 p.m. Wednesday, June 6). For the inaugural film in its new location tonight, Strange Brew serves up Mallrats, Kevin Smith's second feature. It's another Jersey story about slackers slowly rumbling toward maturity, with Jason Lee as the man-child Brodie and Jeremy London as his best friend, TS Quint. The duo hang out at the mall after being dumped by their girlfriends, bicker about their love lives and occasionally pal around with Jay and Silent Bob (Jason Mewes and Smith) while arguing about the importance of comic books and Star Wars. Keep an eye out for the Jaws references, too — they pay off when the shark finally appears.