It's another packed week of events, you lucky people. Take your pick from one of the biggest and most culturally significant parades in the city, a collection of risky tales told by St. Louisans, burlesque, opera and the centennial celebration of one of St. Louis' most beloved institutions.

1. A new Macbeth, just as messy as the last one
Shakespeare's Hamlet gets the plaudits as the best drama ever written, but it's mostly actors pushing that narrative. (Hamlet gets more time on stage than anyone, so of course thespians love the part.) In terms of actual drama and character development, however, Macbeth is the far superior play. A noble Scottish warrior feels the surge of power in the aftermath of a war he helped win and thinks more power might be just what he needs. His wife implores him to follow through on this plan, and when things get sticky she's there to do whatever is necessary. England's National Theatre has a new production of the dark tragedy in the works with Rufus Norris directing Rory Kinnear and Anne-Marie Duff as Lord and Lady Macbeth. You can see a recording of a live performance at 7 p.m. Thursday, May 17, at Marcus Wehrenberg Des Peres 14 Cine (12701 Manchester Road, Des Peres; www.fathomevents.com). Tickets are $20.

2. Strangers recite their risky pasts
Supposedly, everyone has a story in them, and Kevin Allison encourages people to tell them. And not the fictitious ones, either. Allison's podcast Risk! features people from all walks of life telling real stories from their past, particularly the stories they thought they'd never share with a stranger, let alone a room full of them. He brings his Risk! Live tour to town at 8 p.m. Friday, May 18, at Delmar Hall (6133 Delmar Hall; www.delmarhall.com), which is where St. Louisans Amy Brooks, David Wraith, Mimi Le Uke and Rafe Williams will tell their true and risky tales. Tickets are $20. 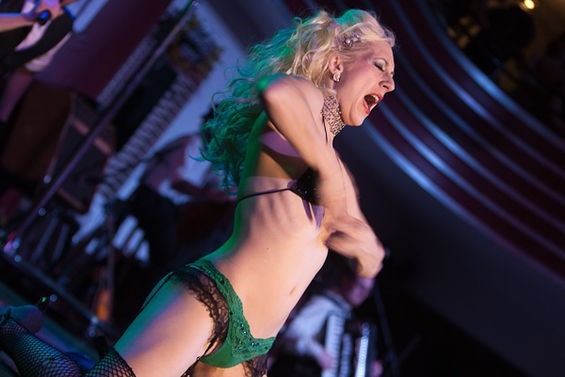 3. It's a burlesque weekend
Lola Van Ella's Show Me Burlesque Festival has grown over the course of nine years to an incredible size. Four different shows spread over three nights are required to accommodate the performers who represent the best of the burlesque, neo-burlesque, cabaret, modern vaudeville and circus scenes. New York's Nasty Canasta and San Francisco's Alotta Boutte are the headliners, and scores of other performers will take the stage throughout the festival as well. Performances are at 7:30 and 10 p.m. Thursday, 7:30 p.m. Friday (May 17 and 18) at 2720 Cherokee Performing Arts Center (2720 Cherokee Street) and 9 p.m. Saturday, May 19, at the Casa Loma Ballroom (3354 Iowa Avenue). Friday night's show is the Red Light Revue and includes entrance to the Van Ella Bordella after-party at 10:30 p.m., which combines a speakeasy with a Weimar-era German cabaret. The waitresses are surly, the band's version of jazz is sleazy and the entertainment is better seen than described. Tickets are $10 to $125 depending on the performances you pick. They're available through www.showmeburlesque.com.

4. An opera about love and life
Late May in St. Louis means the return of Opera Theatre St. Louis, and here the company is, right on time with Giuseppe Verdi's wildly popular La traviata. It's the story of the queen of Paris courtesans, Violetta. She keeps things light, joyful and decidedly impersonal — "don't fall in love" is the rule she never flouts. But then she meets young idealist Alfredo at a party and contemplates breaking her own iron rule. To make matters worse, her nagging cough seems to be back, just as she believed she had beaten it. La traviata is performed at 8 p.m. Saturday, May 19, at the Loretto-Hilton Center (130 Edgar Road; www.experienceopera.org) and then seven more times in repertory through June 23. Tickets are $25 to $127.

5. You're about to enter a dream world of magic
Local theater company Prime returns for a second season with the theme of "Know Thyself." First up is Reverie, a waking exploration of dreams. Six plays that were written, cast and rehearsed in 24 hours dive deeply into the mysterious world of our sleeping mind — and what it all means. Are dreams prophesies, or are they the language of our unbridled emotions? Find out at 8 p.m. Saturday, May 19, in an unused storefront at 2712 Cherokee Street (www.primetheatre.org), which has been transformed into a dreamworld by a group of local artists expressly for this show. Tickets are $15.

6. St. Louis shows up for Annie Malone
The Annie Malone May Day Parade is famously the second-largest African American parade in the country, but it's also the most important fundraiser on the Annie Malone Children and Family Service's schedule. The charity provides kids from infancy to age 21 who have been abused or are at risk find a safe place and learn the skills they need to overcome hardship and become successful in life. The 108th edition of the spring spectacular starts at 11 a.m. Sunday, May 20, at 20th and Market streets (www.anniemalone.com/parade). There will be decorated floats, food and merchandise booths and essentially all of black St. Louis gathered to celebrate the legacy of Annie Malone, and to guarantee the future of the organization that bears her name.

7. Celebrating musical theater across two centuries
One hundred years ago St. Louis was a very different place. Many of the institutions we consider essential to our collective identity were either just getting started or not even dreamed up yet. And yet in 1918 as World War I ended and the glow from the 1904 World's Fair faded, Mayor Henry Kiel believed what St. Louis needed was a municipal theater that could provide entertainment and culture for everybody.

Here we are 100 years later, and the seed planted so long ago still bears fruit every summer. The Muny marks a century of performances, stars, changing tastes and audiences with a party on Sunday, May 20. The Muny Birthday Bash holds true to Kiel's inspired vision: It's free, and everybody is invited.

The "big day" is musically themed, naturally, with events that harken back to the deep repertoire of shows in the Muny's history. Highlights include Aladdin's camel rides for the kids, an All Shook Up bandstand and a Meet Me in St. Louis Ferris wheel, as well as food trucks, cupcakes and strolling characters.

"I keep thinking of it as a street fair; you're not going to be able to do everything," cautions Tracy Utzmyers, the Muny's production manager and one of the people helping to organize the party. "You're going to have to pick and choose what you want to do. We have kid zones, some local bands, and we'll shut down the street in front of the Muny for the food trucks. It goes all the way up the hills toward the upper parking lot."

The Muny Birthday Bash takes place from 1 to 5 p.m. Sunday, May 20, at the Muny in Forest Park (www.muny.org). Admission is free, and everybody is welcome.

8. Everybody wrestles with the meaning of life
The New Jewish Theatre closes its season with Aaron Posner's Life Sucks, which is adapted from Anton Chekhov's Uncle Vanya. In Chekhov's original play, an extended family and their close friends stew over regrets and long for change while all occupying the same country house. Posner reassembles the pieces in a modern setting. He leaves the yearning and ennui intact as he guilds the characters with wryness and a tender playfulness. After all, the nineteenth-century Russian countryside may be a world (and a century and a half) away from modern America, but trying to make sense of life remains a time-honored occupation. Life Sucks is performed at 7:30 p.m. Wednesday and Thursday, 8 p.m. Saturday and 2 p.m. Sunday (May 23 to June 10) in the Wool Studio Theatre at the Jewish Community Center (2 Millstone Campus Drive, Creve Coeur; www.newjewishtheatre.org). Tickets are $41 to $44.