Warm weather and sunny days are here at last, which means most of St. Louis will be outside this weekend enjoying the brief window before the dome of humidity clamps shut and broils us all. What will you pick: Cinco de Mayo or baseball? One of those events is free, so consider both. Hellfire, do everything. It's a free country.

1. Listen to the ladies of St. Louis
Charis, the St. Louis women's chorus, celebrates its silver anniversary this weekend with two special concerts called Singing with My Sisters. A virtual choir comprising members of other Gay and Lesbian Association Choruses from across the country will join Charis for its performance of Holly Near's "Singing for Our Lives," which was written in response to the assassination of Harvey Milk. Also on the program are the Big Band classic "Sing, Sing, Sing" and Lady Gaga’s "Born This Way." Singing with My Sisters takes place at 8 p.m. Friday and Saturday (May 4 and 5) at the Missouri History Museum (Lindell Boulevard and DeBaliviere Avenue; www.charischorus.org). Tickets are $13 to $20.

2. Laugh with a couple of improv pros
Improv comedy gameshow Whose Line Is It Anyway? started way back in 1988 in England, with early standout performers Ryan Stiles (the gangly one) and Greg Proops (the stylish one) showing up a year later. It transferred to America and changed hosts but kept many familiar faces, occasionally leaving TV only to reappear a few years later with pretty much the same regulars, like some sort of audience-participation hydra. Here we are 30 years later and the touring show Whose Live Anyway? hits town with — guess who? — Ryan Stiles (still gangly) and Greg Proops (still stylish) in the cast. They're joined by Joel Murray and Jeff B. Davis, and the whole gang will take suggestions from the audience and turn them into ridiculous party games. Whose Live Anyway? starts at 8 p.m. tonight at the Touhill Performing Arts Center on the University of Missouri-St. Louis campus (1 University Drive at Natural Bridge Road; www.touhill.org). Tickets are $23 to $79. 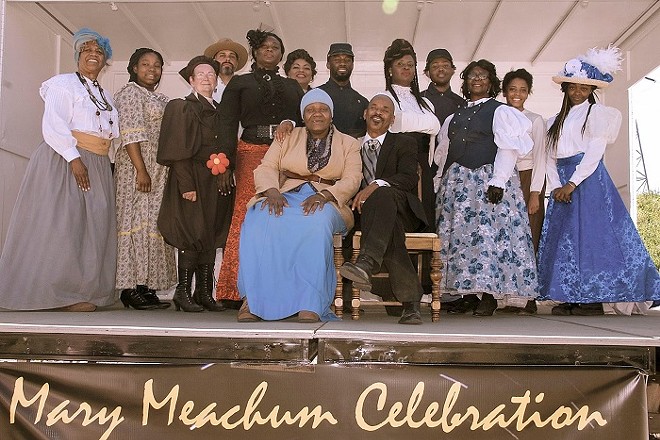 3. Learn the secret history of the 1904 World's Fair
The 1904 World's Fair was St. Louis' first moment in the international spotlight, and the city, the fourth-largest in the nation at the time, wanted to put on its best face for the world. A small city was built in and around Forest Park to house display halls, music halls, restaurants, amusement parlors — just about everything you could imagine.

Including, in a special hollow, a group of pygmies from Africa. They were displayed in all their "savageness," with a walkway over the top so white visitors could literally look down on their fellow human beings and point and laugh.

As historian Angela da Silva explains, this was a far different sort of display than America brought to the 1898 World's Fair in Paris.

"There was a special exhibit called 'The Progress of the American Negro' at the Paris 1898 World's Fair, curated by W.E.B. Du Bois," da Silva says. "One of the reasons Du Bois did it was to show that there wasn't a monolithic black culture in America. A black man at Smithsonian was charged with finding books by black people for the exhibit. Du Bois was hoping for 200 — he found 3,000. Four years later, black people couldn't get a drink of water on the fairgrounds in St. Louis."

Da Silva's recent research reveals that, while the 1904 World's Fair welcomed the international community to St. Louis, the invitation didn't extend to black St. Louis — unless they wanted to work a menial job behind the scenes or be in one of the anthropological displays designed to "prove" their subhuman nature. It's this research that informs The Unfair Fair: Prejudice on the Pike, held from noon to 5 p.m. at the Mary Meachum Freedom Crossing (28 East Grand Avenue; www.marymeachum.org) on Saturday, May 5.

"We'll have an hour-long play with vignettes that show, authentically and honestly, what happened at the World's Fair," da Silva says. "Some people are going to be upset — it's overt racism. Ugly things are shown. But the truth needs to be known."

4. Celebrate America's only Mexican holiday
Cinco De Mayo is always celebrated on a Saturday along Cherokee Street, but this year the holiday and the celebration coincide. That means a huge blow-out party is on tap from 11 a.m. to 10 p.m. on Cherokee Street between Nebraska Street and Jefferson Avenue (www.cincodemayostl.com). More than 25 musical acts perform on three stages during the street festival, which also boasts a cornucopia of incredible authentic food and drinks from neighborhood restaurants, and the dazzling and daffy People's Joy Parade, which steps off at 1:11 p.m. On top of all that, Dynamo Pro Wrestling supplies two hours of Lucha Libre beginning at 3 p.m. at the corner of Cherokee and Iowa, and there will be numerous folk dance groups performing throughout the day. Admission is free, but bring money for food and beverages — it's gonna be a hot one, no matter what the actual weather may be.

5. Them birds is back in town
The St. Louis Cardinals are flying free 'n' easy atop the Central Division (at the time of writing), but the Chicago Cubs are only a few games behind. The two old foes split a three-game series in Chicago a couple weeks ago. (A snow day postponed the first of the games to July, hence the indecisive outcome.) But this weekend's series takes place in St. Louis, and snow is not in the forecast ("at the time of this writing" added only because this is St. Louis — who knows?). The Cards and Cubs face off at 7:15 p.m. Friday, 1:15 p.m. Saturday and 7:05 p.m. Sunday (April 4 to 6) at Busch Stadium (601 Clark Avenue; www.stlcardinals.com). Remaining tickets are $15.90 to $575.90.

6. The Phantom returns from whence he came
Andrew Lloyd Webster's colossal hit The Phantom of the Opera remains immensely popular for a show about a mercurial stalker. The titular Phantom haunts both an opera house and young chorus girl Christine. He mysteriously arranges for his obsession to become the star of a new opera written by you-know-who, but then lashes out at Christine when she falls in love with a kind man from her past rather than the masked man who murders her castmates. Full of special effects and Webster's eternal songs, Phantom still has the power to make audiences appear in their seats in an instant. The musical is performed Tuesday through Sunday (May 9 to 20) at the Fox Theatre (527 North Grand Boulevard; www.fabulousfox.com). Tickets are $39 to $200.

7. A story about the indoor kids at a school for wizards
Once upon a time, there was a series of increasingly popular children's books about a perfect boy wizard and his cool, important friends all attending magic school. Lighting bolt on his head, glasses? Sound familiar? Those kids saved each other and the world. But Puffs isn't about them. Instead, Matt Cox's play Puffs, or Seven Increasingly Eventful Years at a Certain School of Magic and Magic is about a different group of sensitive, outsidery kids who were in the same class but were sorted into a very difference house of magic. You know which one — all heart, no wand? Puffs follows Wayne, Oliver and Megan, who are decidedly not destined to save the world, as they complete the same courses and occasionally get caught up in the perimeter of that most important boy-wizard's power struggles. The show is both kind-hearted commentary on the house in question and a series of in-jokes about those well-known books. If you read them and loved them, you'll get those jokes. Puffs was filmed live during an Off-Broadway performance, and now Fathom Events brings that film to theaters around the country. You can see it at 7 p.m. Wednesday and 12:55 p.m. Saturday (May 9 and 12) at the Marcus Wehrenberg Ronnies 20 (5320 South Lindbergh Boulevard; www.fathomevents.com). Tickets are $18.