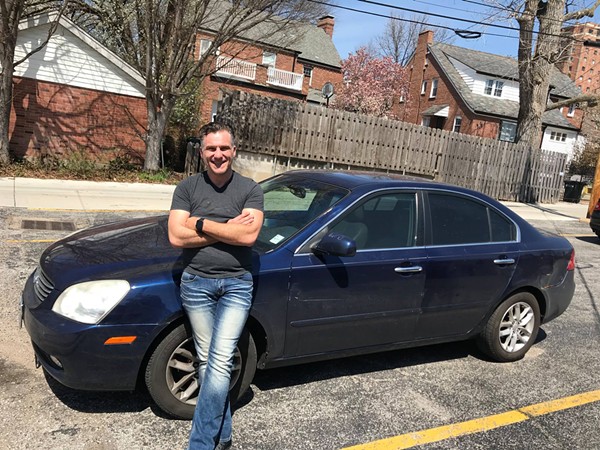 Many people drive for Uber as a way to make some extra cash. But meeting drunk, self-proclaimed philosophers, celebrities and psychologists may be worth even more than the paycheck.

As an Uber driver in St. Louis, Greg Triefenbach has met hundreds of these riders, and now he's memorialized their hijinks in his new book Uberville: St. Louis Uber Stories. Through 170 pages of sordid tales (and quite a few uplifting ones), Triefenbach dishes on what St. Louisans really say and do in the back of his car at 3:30 a.m.

“It’s like I’m telling a story in a bar. That’s pretty much exactly how I write,” Treifenbach says.

With chapter titles like “Indecent Proposal,” “The Different Forms of Drunk” and — most intriguingly — “The Story That Should Not Be Told,” Treifenbach’s book is a peek at locals who are, errr, fully experiencing life in their own way.

In one chapter, the author details what it’s like to drive during St. Louis’ notorious Halloween spectacles:

I got to wrap up an incredibly entertaining evening with a very drunk female Chewbacca. Even though her mask was tilted back over her face because she was having trouble breathing with it on, I was impressed with her ability to stay in character the whole trip home. She was sitting in the back having a conversation with me while speaking drunk Wookiee. The oddest thing about the entire ride was I’m pretty sure I understood what she was saying.

Unsurprisingly, Triefenbach — who began driving for Uber in 2015, back when the ride-sharing service was operating without regulatory approval, drawing consternation from the area's taxi commission — tells Riverfront Times that the most exciting encounters happen late at night as the bars begin to close. A night owl himself, he cruises near the popular watering holes between 10 p.m. to 4 a.m., waiting for the app to direct him to inebriated partiers trying to get home.

But Treifenbach has a genius method that nets him countless fares each evening. In Uberville, he shares that he uses an embellished Facebook profile — OK, OK, a “hot girl” — within college-oriented groups to get the scoop on parties and events around town that will be swarming with people in need of a ride home.

“As a ‘good-looking girl,’ I get invited to everything,” Treifenbach tells RFT. “The students all travel in a pack and do these parties together, so then I go down and just go back and forth [between the party and residences]. And it was a Wash U kid who told me to do that!”

As Treifenbach mentions in Uberville, his vehicle has served as the stage for break-ups, make-ups and every kind of bodily function imaginable — especially during the wee hours. He’s dealt with riders’ urine, vomit… and even a near-death experience. Treifenbach had quite a scare after one passenger left his zoned-out friend in the car.

We won’t spoil the entire story, but here’s a snippet from a chapter titled “Pass Out Removal Service”:

I turned to let his friend know we were here and was shocked at what I saw. The guy was lying on his side with his eyes open and staring nowhere. I thought he was dead. I turned the car off, got out of the car and opened the backseat to see if he was ok. I shook him, no response. I put my ear to his face and could hear him breathing. The dude was passed out with his eyes open. I’ve heard people joke about others being so drunk they were catatonic but I didn’t think that was a real thing.

And of course, Treifenbach has endured his share of propositions. In the book, he shares the many ways in which riders have hit on him, from men offering $500 for a blow job to young women cuddling up to him in hopes of scoring a free trip.

“It’s just like they were working guys all night for free drinks,” he laughs. “It took me a while to figure that one out.”

Because his passengers are so unpredictable and Ubering takes a huge toll on cars, Treifenbach bought a used Kia Optima specifically for shuttling people around. He shares that riders are divided on sitting up front versus sitting in the back and that younger fares are baffled by the car's ancient music setup.

“This car has a tape deck in it, and they’re always asking, ‘Do you have a USB? Do you have a thing so I can plug in my phone?’” Treifenbach says. “I’m like, ‘I don’t have one of those, but if you have a mixtape, I can play that.’ They’re like, ‘I don’t even know what you’re talking about right now.’”

In his day job, Treifenbach is head coach for the St. Louis Diving Club in St. Peters, having been a five-time All-American while at Louisiana State University in the 1990s. His students know about his Uber gig and frequently beg to read Uberville, which he’s nixed because of the adult nature of the stories within.

“There’s this eight-year-old boy on the team who’s been talking to me about reading the book to them and giving them one, and I know I can’t,” Treifenbach laughs. “I tell him, ‘You’ve got to talk to your parents,’ and he says, ‘But they won’t let me’ and I say, ‘Well then you can’t have one.’ I think he’ll steal one if he sees it laying around. I always tell his parents, ‘He’s trying to get that book, so you need to check his bag!”

But despite the creepers, the drunks and the intimidators that Treifenbach mentions in Uberville, he says he’s grateful for the chance to connect with so many of his riders.

“Everybody gets their information on what the world is like from the news or from social media, and if there’s anything I can be truly grateful about it’s that I’m actually out there meeting [people],” Treifenbach says. “Like, everybody writes about what the millennials are doing and what they think, but I’m actually talking with them and know what’s going on with them. It’s changed my perspective on people.

“You hear how ‘dangerous’ St. Louis is, but you meet with people and hang out with them. My perception about my own city has changed. I’ve gone out and done my own research,” Treifenbach says.